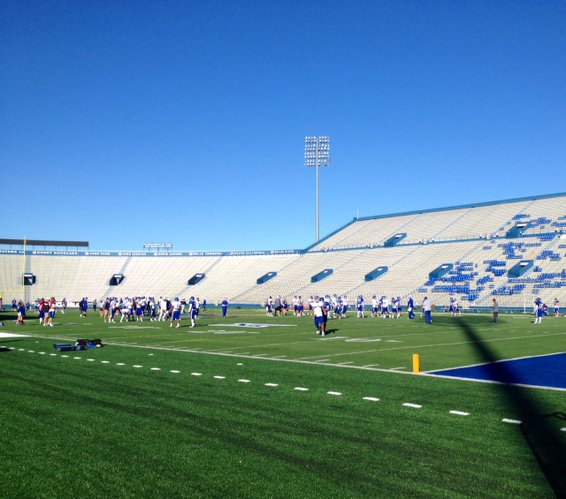 The Jayhawks practiced in Memorial Stadium on Wednesday on a gorgeous fall day. by Matt Tait

I don't care how many times I go out there the rest of the season, I think I will continually be impressed by how much attention the KU coaching staff gives to fundamentals and proper technique during their normal practice routine.

That was the biggest thing I took away from Wednesday's hour or so that we were out there as the Jayhawks continued preparation for this weekend's game at Texas Tech, and, it showed up everywhere on the field.

Offensive line coach John Reagan worked closely with the tackles on one-foot bursts that helped position them deeper to take on pass-rushers and, while doing so, showed no patience for wasted time.

While working with left tackle Pat Lewandowski at the 5-yard line, Reagan barked to right tackle Larry Mazyck behind him around the 8 to be set up and ready for his reps next. Before Reagan even turned around, Mazyck was in the proper stance and ready to work. This rapid-fire, back-and-forth approach continued throughout the drill.

Down the field 60 yards, the same sort of instruction was being given by defensive backs coach Dave Campo, who routinely stopped one drill to demonstrate with his body what he was yelling with his voice.

It's funny because during Tuesday's media session, Campo slyly pointed out that, even though being a head coach at the college level is a young man's game, he still believed he had plenty of energy left in the tank. Wednesday, I saw it on full display. What a resource.

At one point, Campo was caught in the middle of the drill and nearly taken out by safety Isaiah Johnson, who, wisely, wrapped up his coach and did all he could to prevent himself from taking him to the ground. Rather than sighing or taking a moment for relief, Campo rolled his eyes, mumbled something or other under his breath and hustled back out to his spot in the drill. Great stuff.

It's not as important for the veterans who have been through this whole thing before, but seeing the coaches work like this really helps send a message to the young guys and, in my opinion, is exactly what's necessary to change the culture and future of the program.

Here's a quick look at some other things that stood out from Wednesday's practice:

• Former KU kicker Scott Webb was on hand to watch the action. Webb, as you may recall, was the KU kicker on the Orange Bowl team in 2008. 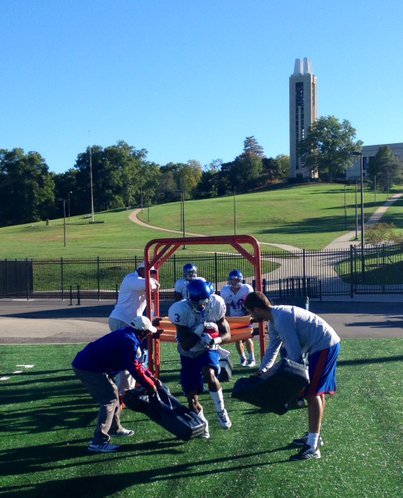 • Senior Tony Pierson spent the early portion of practice working exclusively with KU's running backs. The good thing about Pierson right now — other than all that speed — is that he's reached a point where he's advanced enough as a receiver and yet still comfortable enough as a running back to be used in either spot (or even both) week in and week out.

• Want one for the attention to detail file? During a drill with the running backs, who ran through the gauntlet to simulate tacklers reaching and grabbing to bring them down, running backs coach Reggie Mitchell recognized that Aaron Plump did not have a ball. Rather than letting it slide and moving on to the next drill, Mitchell made Plump go get a ball and take his turn again.

• I watched the O-Line for quite a while on Wednesday and the main thing I took away was this — these dudes are working hard. I can't say I heard as much grunting and groaning during all of the drills I saw in preseason camp as I did during one or two drills on Wednesday. Say what you want about the line, but don't say it doesn't matter to these guys and that they're not working to get better.

• At least for the time I was out there, senior cornerback Dexter McDonald was a full participant. KU coach Clint Bowen said earlier this week that he expected McDonald to play Saturday and I didn't see anything that would indicate otherwise.

"I don't care how many times I go out there the rest of the season, I think I will continually be impressed by how much attention the KU coaching staff gives to fundamentals and proper technique during their normal practice routine."*

Nice to have a true college coach back at the helm. And excited to see how we play Texas Tech this Saturday. Confident we can finish this season out strong.

At last a coach who actually applies his trade---teaches young men the game of football--all essentials. Lloyd Kinnison