What caught my eye at Wednesday's practice: Oct. 1st 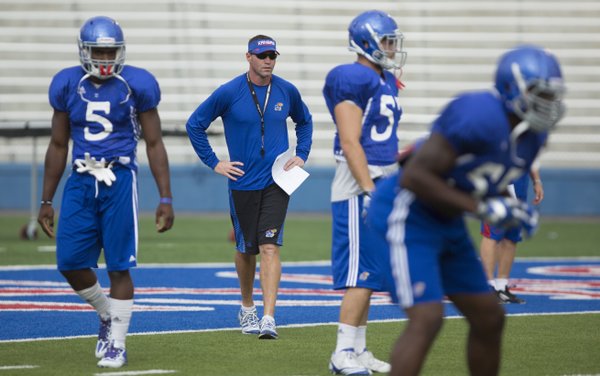 In-season open practices are back at the Kansas University football complex and today was the first day for the media to go out and take a look at the way Clint Bowen runs things as the head coach.

To be fair, it's not that much of a departure from the way Bowen ran things before. It's just that now, Bowen is running the whole show and his impact on the entire team, and not just the defense, is evident.

His energy is contagious. His passion comes out in every drill. And, perhaps most importantly, his attention to detail and the demand that the players do it right or do it over has become the norm.

It's rubbed off on all of the assistant coaches, as well.

Because we haven't been able to attend in-season practices for a couple of years, and, because even when we did it was only for the first 20 minutes, it's hard to say how different or similar this is to what came before. But that hardly matters. All that matters is that it is being done and the players seem to be responding.

It won't mean much if the results on the field don't change on game days. But it definitely can't hurt.

Here's a quick look at a few other things that caught my eye at Wednesday's practice, where we were able to observe for more than 45 minutes and, as far as I've been told, will be able to every Wednesday for the rest of the season. 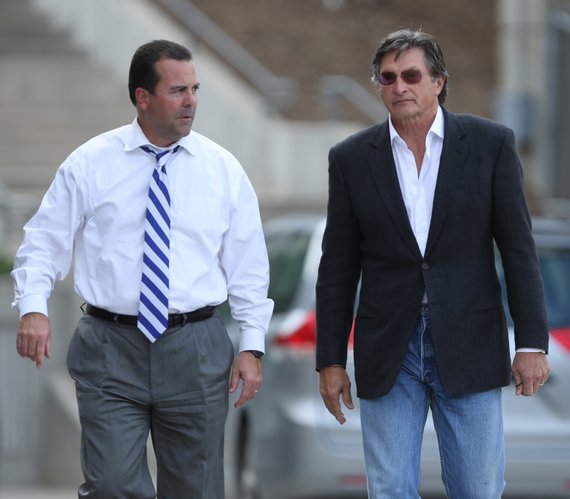 • KU legend David Jaynes was in attendance to speak to the team before practice and he made no bones about what he thought should be expected out of a Kansas football team. Jaynes, a former KU quarterback and Kansas native who finished fourth in the 1973 Heisman Trophy voting, did not yell and scream and spit, but he was direct. He said practice should be harder than the games. He said he always asked that the KU DBs be right on his wide receivers during practices so he would have to be as accurate as possible. That way, when they reached Saturdays and the opposing DBs played a little off for fear of getting beat deep, the throws would be easier to make and the game would seem simple. The message was well received and Bowen, when he introduced Jaynes, made sure the team looked up to the to of the bowl at the north end of Memorial Stadium, where Jaynes name is plastered on the wall. Cool moment. I heard former KU lineman Keith Loneker spoke to the team at the end of Tuesday's practice.

• One cool thing about the way practice began today (and I assume this is how it begins every day now) was how the team took the field. Instead of players strolling out to the turf one-by-one or a few at a time, they all congregated by the bronze Jayhawk outside of the locker room and took the field together. Any guesses as to who led the way? Yep. Bowen. 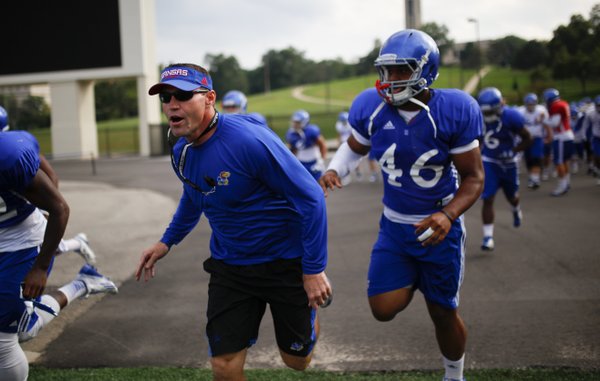 Kansas interim head football coach Clint Bowen runs out to the practice with the team on Wednesday, Oct. 1, 2014. by Nick Krug

• I mentioned that Bowen's energy seems to have rubbed off on everyone and that includes the assistant coaches. I think the Jayhawks started doing some more physical work a couple of weeks ago, so that part was not terribly new. But the intensity of it and the urgency they operated with seemed a bit amped up. Even the assistants ran from station to station and drill to drill. No wasted time by anyone.

• One of the best soundbites of the practice came from Bowen during a linebacker drill. It was simple and to the point, directed at one player but was probably a subtle message sent to the entire team. “Quit being soft,” he barked.

• Here's the thing about Bowen taking over and how he wants it all to go.... If you walked out to the field today to watch practice and did not know who the head coach was, you might not necessarily have picked Bowen first. That's not to say he wasn't in command or wasn't the one running the show, but it does indicate that he's not trying to tackle this thing alone. He's letting his coaches coach, he trusts them to do their jobs and wants this to be a team run by the coaches, players, fans, alums, administrators and anybody else who cares about Kansas football. It seems to me that Bowen only cares about two things and two things only out there on the practice field: Does it or does it not affect KU's chances of winning the next game? If it does, he'll deal with it. If it doesn't, he's not too concerned about it and it can wait.

• As for a detail about the whole urgency and working harder thing, I think it's important to note that it's not just the guys who aren't playing who have stepped it up. The front line guys have really led the way in this thing. Michael Reynolds, Ben Heeney, JaCorey Shepherd, Nick Harwell, guys like that have even turned their intensity up and doing so makes that the standard for practices now.

I really do not know what to expect. Hoping for the best over the next few weeks. Rock Chalk!

We were at the Duke game and when the Hawks returned to the field at halftime several KU people commented that they were strolling out on the field in 1'sans 2's like they didn't have a care in the world. They had no spirit and it showed.

Duke, however, ran back on to the field as a group. The difference showed up in the 2nd half.

I hope Bowen is as successful at being the HC as he is passionate about KU. I would love nothing more than for this to work out.

Tait, any chance you can visit all the conference teams open practices (when available) and see what the differences are? Maybe a plan for next year?

Bill, thanks for your commitment! I have a strong feeling that the end of the horrendous period on the field is near.

Jaynes could probably suit up and have a better completion ratio!. David Jaynes was a stud! I remember him on the Playboy All-Football team when Playboy would select the position players. What a season Jaynes had. I still feel he was one of the most accurate passers in college during his time.

Hopefully, our DB's listened to David too and will play tighter man to man in practice so Cozart can learn to thread the needle.

my expectation for Saturday is that the Hawks will lack nothing in energy and intensity, but we may be left wanting for organization and discipline.

It will be interesting to see how the staff coaches and manages the game, and how the players are able to bottle up the emotion and focus it into solid intense and disciplined execution. Those two things will take time and we may not see the fruits of these intense practice sessions this season...

My expectation is that things will be different, and maybe even better, but not great.

I hope that Bowen gets the gig because I think the bigger difference will be next season. Likely if Bowen wins the position then he will command a low enough salary as HC that he can hire some solid staff members to fill in the gaps of the new regime. Could be more former Mangino staffers making a reunion? Unfortunately we still have to pay Weis. I'm curious how we'll handle paying off Weis' contract. If we expedite it to get him off the payroll or if we continue the payments over the next 2 years.

I read in another article that he doesn't get a lump sump. It'll be paid off over the next couple of years.

I read that too. Gill's contract required that KU pay it out within 90 days. Weis' contract doesn't specify that it be paid out any time before the end of the contract period. The may be reason's they would want to "get it over with", but financially you'd rather have that money in your own account until you are required to pay it... at least if it's in an account that gains interest.

Jayhawks gathering together before running out on the field --- YES! Will this win the game? No. But it's crazy not to be pumped while taking the field.

Right!?! Hell, I still get pumped up and sprint out to left-center for my old-man city league softball games. Strolling out onto the field is absurd. This team needs passion and if Bowen's passion rubs off on them we might just see a difference on Saturdays!

I like the team sticking together, running out on the field together even if it's just practice. Maybe "The Program" should be brought to the football team to teach them teamwork. I hope we see a difference on the football field. I'm excited all over again!