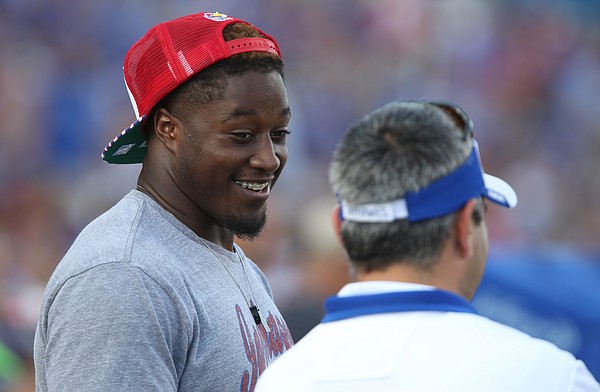 When the Denver Broncos, fresh off of last week's whipping at the hands of the New England Patriots, line up for the first defensive play of this weekend's game against Oakland, 27 percent of their starting lineup will be former Jayhawks.

Although Chris Harris and Aqib Talib — both on the Pro Bowl ballot — already are fixtures in the Broncos' starting lineup, the former KU standouts will make room to share the spotlight with linebacker Steven Johnson, a third-year pro who has played primarily special teams since joining the Broncos as an undrafted free agent.

The Denver Post is reporting that Johnson will start in Nate Irving's spot at middle linebacker, as Irving left last week's loss with an injury and is expected to miss some time. Johnson has been in the Broncos' plans at LB for the past couple of years but mostly in a role as a luxury to have a guy like him for depth purposes. When asked to play, Johnson has delivered, but this weekend figures to be his first true crack at proving himself as a regular in the NFL.

While making the leap from seldom-used reserve to starter on a team vying for a second consecutive trip to the Super Bowl could be overwhelming, at least one Bronco believes Johnson is ready and has been ready for the moment for a while.

"Stevey Johnson is going to be able to get the job done," Harris told The Denver Post. "He's been in our defense going on three years now. He has experience in there. He's been waiting for his shot. Now he has his shot. We've been needing him on special teams since he's been hurt, but now he has a shot to play and he has a chance to show what he can do."

For more on Johnson's likely move into the starting lineup, check out Post writer Mike Klis' report from Monday.

Ughh.. I love seeing our guys get opportunities, but I hate for them getting opportunities with teams that I loathe.. No offense of course, Tait... ;)

Doesn't it hurt? I root for these guys every Sunday, but I can't root for their team to win. It's not like they have an issue winning anyways so I feel like its okay

Great photo. Every time I've seen Johnson off the field, he's smiling. I saw his interview at media day his senior year and he impressed the heck out of me. It was the first time I ever saw an athlete thank the media for interviewing him. Nice guy. And a great player.