What caught my eye at Wednesday's KU football practice: Nov. 19 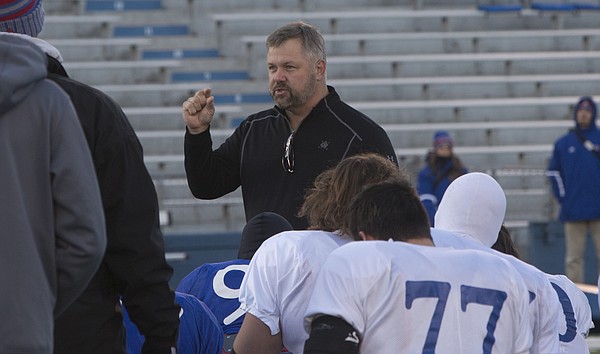 Former KU standout center Chip Budde was on hand at Wednesday's KU football practice to give a pep talk to players as the Jayhawks prepare to travel to Oklahoma to play the Sooners. by Richard Gwin

I've been going to KU football practice for years now and, after a while, you start to wonder how much you really can see when you're there and, this coach or that coach, how different practices really can be.

I don't wonder any more.

Either way, I left today's practice thinking to myself how crazy it is to see a bunch of guys who have done almost nothing but lose during their time at KU fighting their butts off in the freezing cold and having fun all the way to the end of the season.

Usually by now — at least during the past four or five years — it's been about going through the motions of getting the season over with and moving on to the next chapter of hoping for something different. Not now. Not today. After dominating Iowa State and nearly knocking off TCU, these guys really believe they can beat anybody right now and they practice like it, coaches included.

Quarterback Michael Cummings said earlier today that there's a feeling of missing out surfacing around the football complex because of the disappointment that they're just now starting to put everything together. Even with that, though, Cummings said it wasn't like the guys were dwelling on it. Instead, they're looking at the last two games as a great opportunity and he said it would be that way if they had two games, five games or 10 games left.

I saw an extra dose of energy out there last week, and coming off the Iowa State victory that made sense. But there was even more out there today. It's crazy to think, but this team really is just two special teams mistakes away from sitting on five victories and having two shots at getting that sixth win for bowl eligibility.

Had they not kicked off to OSU's Tyreek Hill, I think KU wins that game. And if Cameron Echols-Luper hadn't taken that punt back to the house last week to give TCU its first lead since the first quarter, I think that would've changed the outcome, as well.

I'm not the only one. Clearly these guys believe that and even though so many of them are down to the final two games of their careers, they're certainly not operating like the end is in sight.

Here's a quick look at what else caught my eye at today's practice:

• I watched Cummings pretty closely to see how he held up health-wise and he looked fine. Good even. He was a full participant, threw the same amount of ball as the other quarterbacks and even bounced around out there like he wasn't in any pain at all. He said earlier that he felt great today and that most of the right arm/shoulder issue he's dealing with right now was simply a matter of how well he could play through pain. That's good news for Kansas because the answer to that question is, “very well.”

• Former KU center Chip Budde was the former player who spoke to the team before practice and, like many before him, Budde's message was short, sweet, to the point and received with all kinds of hootin' and hollerin', some of it even coming from Bowen himself.

• This week's depth chart has Larry Mazyck listed with the first stringers at right tackle but I also saw Jordan Shelley-Smith (the back-up at both left and right tackle) working with the ones a little bit today. No surprise there. Shelley-Smith has played plenty during the past couple of weeks and it could simply be a case of KU making sure both guys are ready for Saturday's match-up with OU's big and physical defensive line.

• There were plenty of NFL scouts at practice again today and, at least from where I was standing, it looked like most of them were very interested in senior receiver Nick Harwell. I'm sure they were taking notes about junior Nigel King, too, but their eyes seemed fixed on Harwell for extended periods of time. And good for him. After coming to KU with an almost-certain NFL future, Harwell sat out a year and then struggled to get going this season because of KU's offensive issues. He's hot now, though, and it looks like people outside of KU nation are taking notice.

KU is going to have 3 players drafted this year. Harwell, Heeney, Shepherd will all be drafted.

And McDonald, I hope.

I would even go so far as to say Dexter is more likely than Ben simply due to size for their positions.

The real question though is - How many will end up in Denver?

Thanks for continuing to write these articles, Matt!

Practice?? I thought they were done playing after Saturday?

There is NO alternative to learning to tackle properly, cover properly, and develop a well thought out Defensive Scheme. Hasn't been here at least 4 years.

Bowen has substituted enthusiasm and determination for taught skills. In the long run, like 2 or 3 seasons, KU will have to start over!

One of Bowens team mates said 4 years ago, Bowen was taught Defense by the world's worst DC; and he hasn't learned much since.

90% desire and 10% fundamentals in high school; In college it's a much higher percentage of fundamentals and coaching. Almost all college players have the desire or else they're riding pine.

Matt, I love you but please don't use the phrase "KU nation".

There are two nations... Red Sox Nation and Raider Nation

Doesn't work for any other team/franchise/program. Thanks :)

As much as I wondered about that phrase in the article (Are we a third world nation?), this comment deserves a thumbs down.

The sad thing hidden between the lines is the fatal ignorance of "getting the season over with". What's the phrase, "Everyday, you're either getting better or getting worse."

Some of that responsibility falls on the coaches, but it shouldn't be rocket science to any player at this level either. You have to continually improve, especially for a significant part of the season when only winning 1, 2, or 3 games a year, if you're going to change losing.