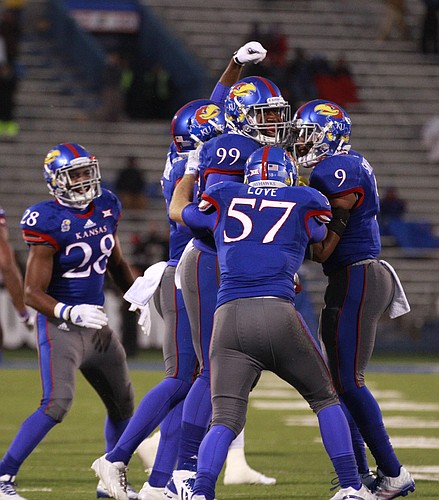 Kansas defensive lineman Tedarian Johnson is surrounded by teammates after recovering a fumble by TCU during the fourth quarter on Saturday, Nov. 15, 2014 at Memorial Stadium. by Nick Krug

They may be small steps, but, at least for a few moments in the past week, Kansas University football was relevant once again.

Don't get me wrong, I fully recognize that there are plenty of die-hard KU football fans who live and die (and most often agonize) with the ups and downs of the program and show up ready to support their team win, lose or draw.

Last week, the Jayhawks had at least two of those moments. The first and most obvious came on Saturday, when KU put a heck of a scare into No. 5 TCU and threatened to single-handedly shake up the entire college football playoff standings, at least for a week. Truth be told, the Jayhawks did that even in a 34-30 loss to TCU, which entered last week ranked fourth in the ever-important college football playoff standings and, by some time tonight, will know whether that close call with Kansas hurt them or not.

The Jayhawks had plays that popped up on SportsCenter and other highlight shows. The names you know well were kicked around nationally for a couple of minutes and, although it went down as just another L, the effort regained Kansas some national respect.

I figured that respect would come and go pretty quickly but then I read this rundown of the playoff standings from the folks at FOX Sports, who not only gave TCU some credit for holding off Kansas (inspired team, on the road, Big 12 foe, all that jazz) but actually sounded off about the coaching search currently under way here. It caught me off guard and when I read it I had to read it a second time to make sure what I saw was right. But it was. There in the third comment under No. 5 Baylor was mention from former college football great Charles Davis — one of a 13-man FOX panel designed to track the playoff progress — gave a shout-out to interim head coach Clint Bowen for a job well done.

Davis: “(Baylor) will benefit from TCU’s struggle at Kansas (give Clint Bowen the job, Kansas; he deserves it), and the 'TCU’s ahead of Baylor in the poll, but Baylor beat TCU head-to-head!' discussion gets quelled, at least for this week. Baylor’s schedule is catching up as they finish with all Big 12 games, including hosting Oklahoma State Saturday night on FOX.”

It might be a small mention and it certainly is not KU impacting the national scene the way the next head coach (whoever that will be) and athletic director Sheahon Zenger want, but it's infinitely better than the blowouts of the Turner Gill and Charlie Weis days and something that, short as it may have been, KU fans can hold onto and take pride in.

If Bowen keeps the next two games close, being that they are away games, I say quit wasting time and just hire the guy. No one knows how well he's going to do or how strong his recruiting will be, but there are some things we know for certain: He LOVES the program and will do anything to put it back on track, players are improving through him and much better than they have in the 4 years Gill and Weis were HC, he's full of infectious energy, we can pay him less than we would a big name, and he simply says the right things every single time.

I would never like to see this again. A suggestion that we pay next HCCB less. It would be a shameful and discourteous thing if KU would even think of paying Clint Bowen less than the going rate for Head Coach Employment.

I guess I'm thinking about KU trying to avoid paying a big name a ridiculous contract. It's easy to misconstrue words when your uneducated Ray. I'll use smaller words for you next time.

If KU hires Bowen, they won't screw him over, but they won't overpay, either. And if offered, there is not a chance Bowen turns down the job. He may counter the offer, but whatever the response, he takes the job. It's not even a possibility worth worrying about. I think Bowen is probably the right guy for the job, but I also think Zenger is smart in doing his due diligence. There is no reason to make a decision right now. He can make the call the day after the KSU game and not lose any strategic or competitive edge at all.

KU should not low ball any coach. Pay fair market value for whoever the next coach based on experience and success, put common incentives in the contract, put a buyout that benefits the school if the next coach is fired or poached by another school.

I will explain. ADs hire consulting firms to help them make big coaching hires as a way to insulate them from blame if it doesn't work out. Zenger learned from the Weis ordeal that he needs someone else to blame when things don't work out.

If the cliché " we can't afford to make another mistake" is still the charge, Kansas simply cannot take a chance on someone with zero Head Coaching experience. His coaching experience has been under Mason, Mangino, Weis, and none of those will ever sniff a Power 5 Conference coaching position. If anything, Bowen needs some assistant coaching tutelage at a Top 20 "program" that encompasses, running a top program, establishing a solid and deep recruiting pipeline, and the "business" side of being a Head Coach.

The "misses" on Turner Gill and now Charlie Weis have this "team" at a minimum 5-6 years behind in all categories of a "Power 5 Conference" team. I continue to use that term because Kansas has historically believed that "we're just a basketball school" and that has kept the standards mediocre at best. Any other program that was on national center stage winning the Orange Bowl, should be competitive with the rest of the Conference. Duke, Oklahoma, North Carolina, UCLA, USC, San Diego State, Arizona, Florida, Texas, Texas A&M, etc...all have very competitive Football and Basketball programs.

Kansas must hire a seasoned Head Coach, that has an existing and prevalent recruiting pipeline. Texas just accomplished plucking Charlie Strong from Louisville. He had only 2 of Head Coaching experience, but had been the defensive coordinator for Urban Meyer at Florida, and Lou Holtz at South Carolina. He was a linebacker coach for Holtz at Notre Dame as well. He is pulling the top players out of Florida, South Carolina, Georgia, because that is where he recruited the past 20 years.

That is just one of many examples that Kansas must consider. Chad Morris the OC at Clemson, second only to Art Briles at Baylor, may enjoy the best reputation among all Texas High School Coaches. Morris won State Championships at (Todd Reesing alma mater) Lake Travis, and Stephenville. He ran his offense at Tulsa for one year and then was hired by Clemson a year later.

There are many excellent Head Coaches with Power 5 Conference experience, as well as too many to list quality assistant coaches. Much like our esteemed Athletic Director, who was hired from some obscure Missouri Valley Conference school, largely because as a child he grew up in Lawrence, Kansas cannot apply that same pretzel logic to the next HC hire. A moral victory over an uninspired TCU team, and opinion the players are playing better is also no reason to award an interim coach with the daunting task of getting this program current. Kansas simply has squandered that luxury.

I think any new coach, even if it's Clint will get a contract that's heavy on incentive s and there's nothing wrong with that. It will also motivate the players to play their hearts out for him. Hey he's gonna get at least three times what he's making now befi re incentive s most likely. And if he accepts what is offered we should not make a peep. All we would be doing then is stirring things up.