Saturday's senior sendoff figures to be special for KU football

As you all surely know by now, Saturday will mark the final home football game in the careers of several Jayhawks. And while the task at hand seems daunting — TCU enters ranked No. 5 in the nation and favored by 28 points — there are plenty of ways Saturday will be memorable for these guys, win or lose.

In all, there will be a total of 20 seniors honored before Saturday's 2 p.m. kickoff with No. 5 TCU.

The aforementioned notes are the result of a personal decision for each player and are not related to Bourbon and Cox's pending eligibility. That has not been determined yet.

Here's a quick look at the seniors who will be honored on Saturday along with a few seniors who KU is pushing for postseason honors: 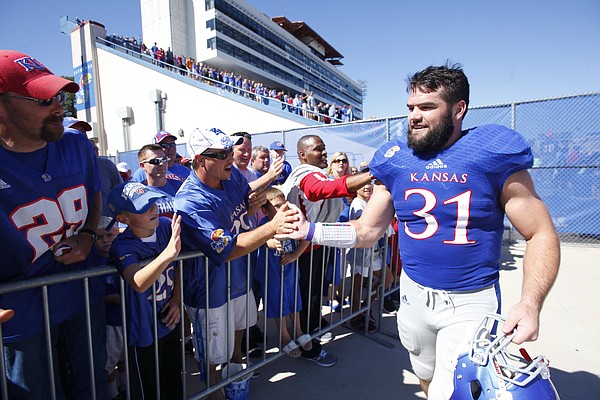 Kansas linebacker Ben Heeney celebrates with fans after the Jayhawks' 13-10 win over Louisiana Tech on a walk-off fieldgoal from kicker Matthew Wyman, Saturday, Sept. 21, 2013 at Memorial Stadium. by Nick Krug

• Heeney has led the Jayhawks in tackles in seven of their nine games on the year, posting double-digit efforts in six of those contests.

• His 17 solo stops vs. Tech were the second most in Big 12 history and are the most in the NCAA in a single game since Tyler Matakevich of Temple recorded 19 solos agains Idaho on Sept. 28, 2013. 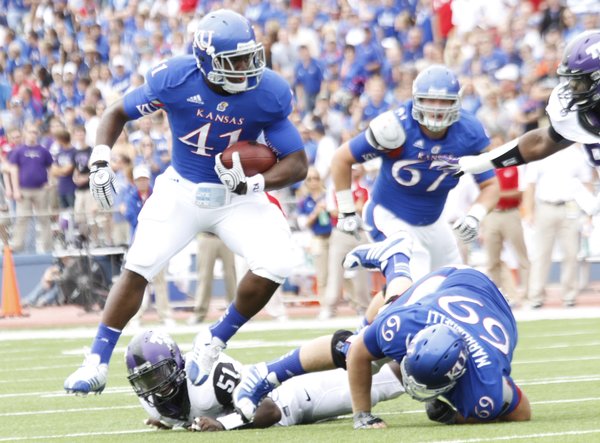 • Ranks first in the Big 12 and eighth in the NCAA in receiving yards by a tight end with 400 yards on 33 receptions.

• His 33 receptions rank tied for third among 'Power 5' tight ends, while his 400 receiving yards are the fourth-best.

• Has recorded five or more grabs in four games with 24 of his 33 receptions resulting in a first down. 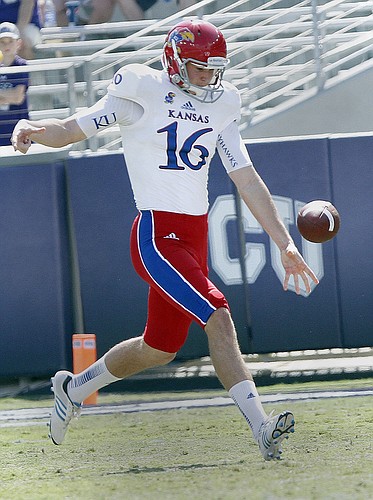 • Leads the Big 12 Conference and ranks 13th in the NCAA in punting average at 44.8 yards per punt.

• Has dropped 33.3 percent of his punts inside the 20-yard line, while 13 of his punts have been fair caught.

Thank you to all of the Senior's for your dedication to the Jayhawk football program. We fans know it's been a tough road for you all. But, we still salute you and thank you all for your commitment and dedication to the Jayhawk Football Program. Hopefully, you all will start a tradition to come back and enjoy future Jayhawk football games. Former Players / Alumni are just as much a key to this program as future / incoming players.

Interesting Clint Bowen story to read as well. Here's a Jayhawk who knows he has nothing to lose and everything to gain. ROCK CHALK!