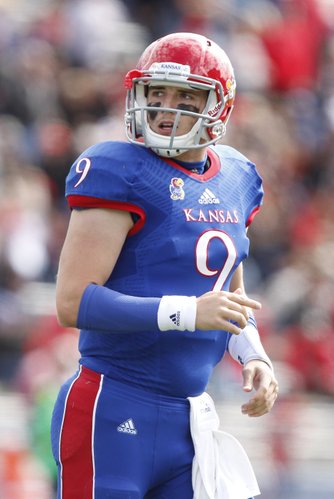 Kansas quarterback Jake Heaps looks at the scoreboard after coming off the field against Texas Tech during the third quarter on Saturday, Oct. 5, 2013 at Memorial Stadium. by Nick Krug

With rumors and speculation that Kansas University quarterback Jake Heaps is looking to transfer still unsolved, I thought I'd take a quick stab at clearing up a couple of things while we wait to see what happens.

First of all, it definitely seems possible that Heaps could transfer. It was the first thing that crossed my mind when KU named sophomore Montell Cozart the starter at the end of spring practices and seems logical for him to at least consider it.

But there probably is more to the decision facing Heaps than just Cozart being named the starter.

As you might have guessed, I've talked to KU coach Charlie Weis a lot during the past few years about transfers — both in and out — and the one thing he's always said about the topic is that players typically transfer for one of two reasons.

If the writing on the wall (or the depth chart) shows that playing time could be tough to come by, some guys look around for better opportunities and other places to play. That seems to be what Heaps is doing now and is the same thing he did when he left BYU to come to Kansas a couple of years ago. It doesn't mean he wasn't good enough to play at BYU or that he's not good enough to play here, just that the situation has changed to give others in front of him the first shot.

But transferring is not always that simple and it's not always about football or whether these guys are good enough to play at their current schools. A lot of good players transfer every year at all levels. But rarely do those types of guys leave because of football.

They leave programs because of philosophical changes, coaching changes or situations in their personal lives that make a change of scenery desired and even necessary. All of that could be contributing to Heaps' decision at the moment. But current KU wide receiver Nick Harwell is a perfect example of one such player.

Harwell left Miami (Ohio) prior to last season not because he wasn't good enough to play there — they surely would have loved to have his talent around for one more season — but because he was looking for a fresh start. He got it with Weis and Kansas and now is poised to be the top receiving option on a team that plays in a better conference and in front of many more eyes of NFL scouts on a weekly basis. That can only help Harwell's professional future and, from all accounts, the move to Kansas has done wonders personally for Harwell, who has been a model teammate, student, leader and hard worker since he arrived.

Heaps is going to do what he believes is best for him, as well he should. That may mean moving on and that may mean sticking around to close out his college career with a bunch of guys he's gotten close with and bled and cried and sweat with during the past couple of seasons.

According to a couple of people I've talked with about the Heaps situation, the whole thing could be over quickly or could drag on into the summer. I haven't talked with Jake about it — players are pretty much off limits in the summer — but I'm sure he's not taking this decision lightly and I'm sure the reason it has gone on this long is because he's doing his homework and thinking long and hard about what he wants to do and what the right thing is for him. Only he can make that decision.

But I think it's important to remember, even if Heaps does leave, that it's not because he wasn't good enough to play here or wasn't welcome. He might not be the starter, but seeing how KU has played multiple quarterbacks during three of the four post-Todd Reesing era seasons, such designation does not exactly mean he's not playing either.

We'll keep an eye on what happens and surely have more as the story continues to unfold.

It appears as if the primary motivator for going with Cozart over Heaps has been Cozart's mobility. Last year's offensive line was a shadow of what KU has had in prior years, and they couldn't give Heaps the time he needed to get the ball out of his hands. Cozart moves well, but often throws the ball on the run, or takes off and makes plays on his own. The problem there is going to be Cozart's exposure to injury when he's running with the ball. Heaps may very well find himself with plenty of opportunities to play week in and week out if he sticks with Kansas.

I will respect his decision. He's got one year left and I'm sure he wants to play. God bless.

Isn't JHeaps entering his fifth year of college? Between BYU and KU, could he graduate this Spring / Summer and be eligble in the Fall at another school?

I was wondering the same thing. Has he graduated yet?

I've been told he has a couple of classes to finish up this summer in order to graduate, so, yes, the senior transfer option is very much in play. If it weren't, I don't think he'd even be considering a transfer.

I want Heaps to stay the course. Cozart can scramble but he has shown no ability to hit a target. Heaps hit his targets many times last season and the receivers dropped the ball. Heaps may have a chance this year.

Can see that being possible, but if he feels that he should start then I can see why he wants to leave.

Heaps started last season very confident and positive looking. But after three games of hitting almost every receiver between the numbers, only to have almost every pass dropped, he understandably lost that spring in his step. By the time the Big 12 season rolled around he was running for his life more than anything else.

Having lived in salt lake and watched Heaps play for byu, jake fit in to the mold of pocket passer that weis prefers. Unfortunately in the big 12 conference, that, with a few exveptions, does not work. Also, jakes yds per completion at byu was really low, something that charlie weis has had a problem with. Transfer is better for heaps, because charlies arrogant attitude in dismissing 'transfers' as not good players and not saying a word about heaps speaks volumes about who weis is.

Well, you certainly don't sound arrogant! I think Jake should stay and eventually use his relationship with Weis to get into coaching.

I'm not even sure how we can formulate an opinion on Heaps. I mean as has been pointed out his receivers couldn't catch a cold last year. Countless catchable balls dropped. The line was bad much of the season. He wasn't named the backup because Cozart is the better QB but more that Cozart can run. I know we have Harwell coming in but sadly I think he'll just be doubled and our passing game will be anemic once again. I hope I'm wrong. Maybe Coleman will step up now that he has a year in D1 and is a junior. I am much more concerned about the big boys up front protecting the QB. If Jake decides to transfer I wish him the best. He was a good teammate but he's gotta do what's best for him. I don't see anything beyond college other than in a coaching role so maybe that will make him stay.