Most Crucial Jayhawks: A look at 25 impact players for KU this fall; No. 25 - LB Jake Love 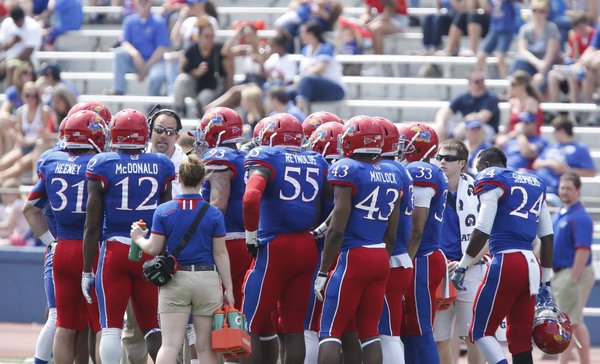 Blue Team coach John Reagan directs his players in the huddle during a break in the first half of the Kansas Spring Game on Saturday, April 12, 2014 at Memorial Stadium. Nick Krug/Journal-World Photo by Nick Krug

This is not a list of the 25 best players on this year's team. That would be much easier to pinpoint and, while still key, would not exactly demonstrate the full value that each player has in regard to the upcoming season.

This is a list of the 25 players who need to have strong seasons in order for the Jayhawks to have a chance to crack the four-win mark for the first time since 2009.

Because it's the summer and we've got nothing but time, we'll unveil this list one player at a time each weekday in reverse order. So today we'll start with No. 25 on the list and countdown during the next five weeks to the No. 1 most crucial player on KU's roster for the 2014 season.

Tom Keegan and I came up with the list by each making our own list of 25 and then combining the results. He's going to handle the blurbs on the odd-numbered players and I'll handle the even-numbered Jayhawks.

Remember, this is not an exercise designed to identify KU's best players but instead an attempt at pinpointing which players, with great seasons, could have the biggest impact for Kansas this fall. 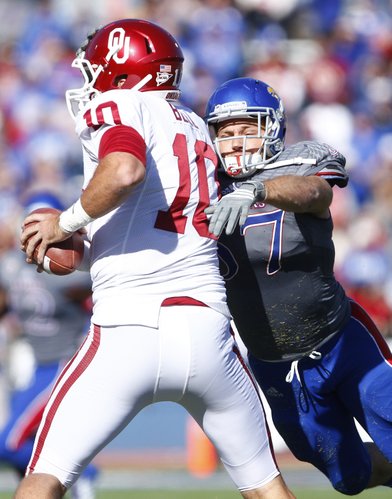 Kansas linebacker Jake Love wraps up Oklahoma quarterback Blake Bell out of the pocket during the second quarter on Saturday, Oct. 19, 2013 at Memorial Stadium. by Nick Krug

Undersized at 6-foot and 220 pounds, Love never has let that stop him from acting as if he’s the biggest dog in the fight. Athletic, he turns his body into an air-borne missile to make plays, playing with a fearless mentality perfect for the linebacker position.

Sounds a little like Ben Heeney, doesn’t he? They do have similarities, although Heeney is bigger, faster and even a little crazier.

It’s tough to look athletic playing next to Heeney, which could be one reason Love doesn’t always get the credit he deserves for his physical gifts. A four-year letterman in wrestling, track, baseball and football at Tonkawa (Oklahoma) High, Love as a senior rushed for 1,761 yards and 28 touchdowns and had 122 tackles and four interceptions.

Hes’ primed for a big season and depth is a touch on the shy side at linebacker so a healthy season from Love would go far.

"he turns his body into an air-borne missile to make plays, playing with a fearless mentality perfect for the linebacker position"

I guarantee you, by the end of this Top 25 Impact Series, every kool-aid drinker out there (Erich Hartmann, Jim Jackson, Jim Stauffer) will be predicting a Big 12 Championship and a trip to the Orange Bowl.

I'm guessing you're wrong on that. Seems like the fan base — even the die-hards and the most optimistic of the bunch — have reached the point where they want to see good results before predicting them.

And who could blame them?

This series isn't designed to overhype anybody. In fact, it's vastly different from that in that it tries to identify the hierarchy of Jayhawks who must deliver this fall.... or else run the risk of the team falling into the same old sad story.

Thanks for checking it out, though.

Orange Bowl? Who are you trying to kid, we want a spot in the College Football Playoff!

And possibly the Super Bowl!

Great idea to get us through until camp starts.

I would think if we lacked depth at the position his ranking would be higher. Instead I think 25 is about right.

The way our defense is set up we’ve been interchanging nickel, OLB and BUCK a lot, so I think we have more depth than the roster indicates. Courtney Arnick can play OLB as can Victor Simmons. Victor has played NB and is slated to play BUCK, so you know he could play OLB. Marcus Jenkins-Moore was all set to be the savior alongside Heeney before the injury. Now he’s at BUCK also. I don’t doubt for a minute he could slide back and resume OLB duties.

It may not even matter though, because one of KU’s best recruits in a long time happens to play OLB. By all reports Kyron Watson might just step in and take the spot. Who knows?

Last year Jake lost his job to Samson Faifili until he got injured, and that was even w/o MJM. As you mention, there are even more options this year. Makes me wonder if he'll have any impact at all, though in his favor is that he is a known commodity, and there are so many other unknowns.

These articles will be enjoyed by this sunshine pumper, even though Cramer will be miserable during this time.

the day is still young