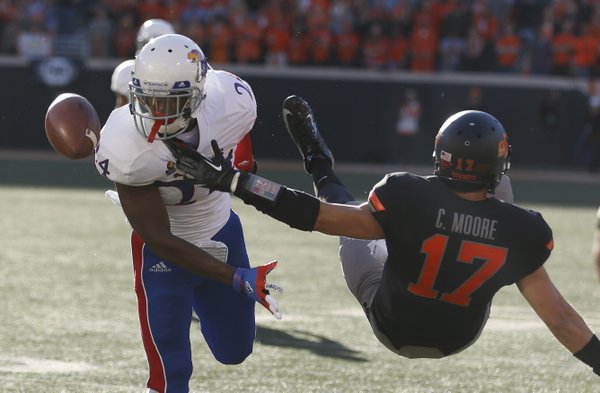 Kansas cornerback JaCorey Shepherd knocks away a pass to Oklahoma State receiver Charlie Moore as Moore falls to the turf during the first quarter on Saturday, Nov. 9, 2013 at Boone Pickens Stadium in Stillwater, Oklahoma. by Nick Krug

You won't find me running out of good things to say about Shepherd any time soon. And I'm not even just talking about his prowess as a football player.

Shepherd is one of the best dudes on KU's roster and although that means a lot in all other walks of life, it doesn't win football games. Luckily for the Jayhawks, Shepherd has the switch required to flip into competitor mode and rarely shows anything but all-out intensity on the field.

Last year was Shepherd's breakthrough year. He was tested time after time as opposing offenses tried to stay away from CB Dexter McDonald on the other side of the field and Shepherd passed almost every time. Two years ago, Shepherd was there athletically but still was learning how to be an instinctual corner. Last year, he took major steps forward in that department but there's no question that he still has room to improve.

I'll be dead honest: Shepherd's a little lower on this list than some might have guessed because he delivered so many times last season. If his ability as a cornerback was still a question mark, he'd probably be in the Top 10 here because the uncertainty around how he would perform would make his season incredibly critical for KU. He'd also be higher on this list if the secondary was not such a position of strength for this year's squad.

But I don't think there's any need to question whether Shepherd will perform or even how well he'll play in 2014. However, because he holds down one of the most demanding and difficult positions in the Big 12 and because KU has almost no margin for error at any position on the field, the senior from Mesquite, Texas, is still going to have to back up all of the praise he's earned and bring his best year yet if the Jayhawks hope to win more games than they've been used to of late.

Luckily for the Jayhawks, Shepherd — with his driven mindset and confident demeanor — is exactly the kind of guy you want in that position.

JaCorey Shepherd should be higher on the list in my opinion because he is also a threat as a returner, and field position is HUGE for the Jayhawks. By virtue of the fact that this list is being compiled on the basis of players' having to have good years in key positions, JaCorey has a large spotlight on him. He did very well in the Oklahoma game but got chewed up against Baylor. He still has room to improve, but Shepherd is really key for Kansas. He's gotta be higher than 18...

I agree with you Joe. But both sides of our secondary got chewed up, especially within the red zone, because we where playing "shield the receiver" rather than looking back at the ball.

Hey Matt, I had a question or two. 1. Is the team still going to go with combination uniforms with the Jayhawk on the helmet? Also, 2. Has there been any talk about revamping a newer version of the Jayhawk, kind of a mix between the new and the '41 hawk? You know.....kind of give it a meaner look?

Part of the reason JaCorey would be less impactful, besides the depth at DB is the fact that he got beat out by Kevin Short for the CB opposite Dexter and is now the nickel. That speaks volumes to the DB depth as well.

There is no guarantee he’ll even be the starting nickel, but I do agree that if he DOES have a great season, he would merit a higher spot on this list.

Man is this list getting me fired up. Thanks

JaCorey needed to stay at WR. We needed his skill set at that position the past couple of seasons.