Another weekday has arrived... Here's the latest installment in our series that examines the Jayhawks who stand to have the biggest impact for KU football this fall. 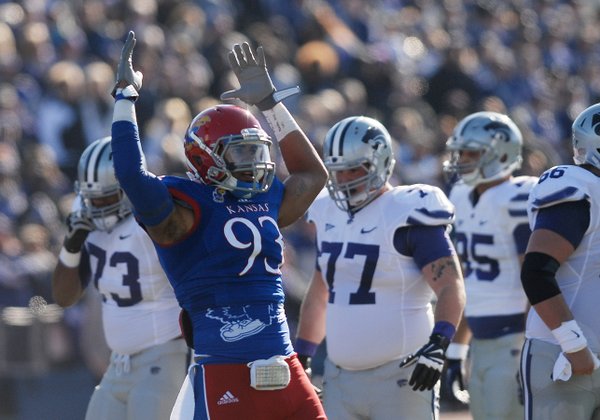 Goodman has long been one of my favorite KU players, as much for his personality, good sense of humor and big heart as his enormous potential.

A true program guy who has slowly but steadily developed and taken steps forward each year at Kansas, it's time for the big man from Beaumont, Texas, to turn in his best season yet.

He has shown flashes of being a pass-rushing menace but never done it consistently well over a long stretch of time. It's in there, though and now that he's reached veteran status it could be time to see Goodman's game reach a new level.

At one point in his career, after KU lost former five-star stud Chris Martin to off-the-field trouble prior to last summer, several Jayhawks voiced their belief that the loss was not catastrophic because Goodman's enormous potential. Goodman followed that up with the best season of his career, tallying 34 tackles, 7.5 for loss, 3 sacks, 2 QB hurries and an interception.

As those number suggest, the 6-foot-3, 250-pound lineman is plenty athletic, has good size and strength and entered the offseason known for his high-revving motor. If he improved any of those areas between the last time we saw him and now, there's a chance that Goodman's best could be right around the corner. If that's the case, so could the KU defense's.

A move to the interior of the D-Line (from the Buck position he played last season) should give Goodman a chance to find some mismatches and use his quickness even better. The big question there will be if he can hold up under the pounding he's sure to take from bigger offensive linemen game in and game out.

Thanks to a recruiting haul that included all kinds of pass rushers, the Jayhawks figure to have options for getting to the quarterback this season. If Goodman isn't cutting it, it's possible that someone else will get his shot. Goodman has the experience, the understanding of the scheme, the hunger and the opportunity. The time for him to become a game-changing player is now.

Sounds to me like the coaches plan on using Goodman as a 3rd down pass rush specialist.

In order for that to be an effective position change that would have to mean that we either have a nice lead or we are consistently putting people in 3rd and long. I hope either one of those situations comes with some regularity.