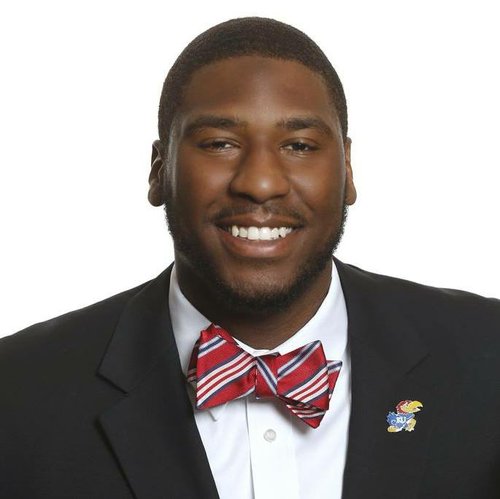 A few weeks ago, Fondal would have been much higher on this list. As one of the few returning linemen with starting experience at left tackle, the former junior-college transfer likely would have entered the season as the man to beat out for the first spot at one of the game's most important positions.

But then Weis lured Iowa Western big man Larry Mazyck to join the Jayhawks and, Boom!, just like that Fondal became more of a luxury than a necessity.

Nothing has been handed to Mazyck, who stands 6-foot-8, 340 pounds (though I've heard from a couple of places that he's even bigger than that), but there are plenty of people who believe he might be the answer for the Jayhawks at left tackle.

If he is, that frees up Fondal (6-5, 295) to become a very valuable back-up at both tackle spots. It's this kind of movement that leads me to believe the KU coaching staff really has upgraded this roster. During the past couple of years, a guy like Fondal would've been an easy starter on the offensive line because of his size and athleticism alone. But now those types of players are being shifted to the second unit because Weis and company are landing better first-team talent to put ahead of them.

That's by no means a knock on Fondal. His role on this team remains important and his ability to fill in behind Mazyck or in place of Damon Martin at right tackle makes it so fellow offensive tackles Pat Lewandowski (still new to the position) and Brian Beckmann (still new to college football) don't have to be counted on quite as heavily right away.

If there's one thing I'm looking to see from Fondal this season it's mental maturity and toughness. He struggled with the mental side of the game during his first season with the Jayhawks in 2013, particularly when he was taken out of games or replaced in the starting lineup. Stuff happens. And if he figured out this offseason how to respond to that “stuff” by working harder and improving instead of getting down on himself, I think he'll have a valuable place within this year's offense.

Hmmm, more important than the starting DB? It must really factor in the greater depth at DB and greater importance of LT that a project 2nd stringer would be in front.