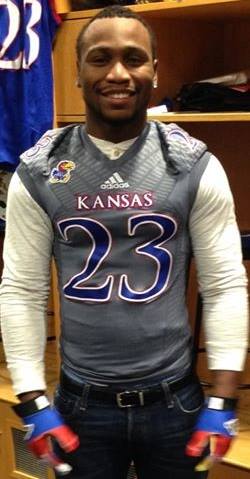 New KU running back De'Andre Mann on his official visit to Kansas. by Matt Tait

There's a good chance that many of you don't know a whole lot about De'Andre Mann. You should change that. Because there's a real chance that the 6-foot, 200-pound junior-college transfer from Hartnell College could lead the Jayhawks in both rushing yards and exciting plays this season.

Mann, the player KU coach Charlie Weis had no desire to sign until he saw him play, owns a solid combination of size, speed, power and elusiveness. He's big enough to run through tacklers, fast enough to run around them and determined enough to come in and compete for carries immediately. He would not have picked Kansas if he didn't think he could be a factor here.

That's not a knock on seniors Brandon Bourbon and Taylor Cox, freshman Corey Avery or any of the other players that will make up KU's backfield this season. It's more a sign of Mann's extreme confidence. The guy's here to make some noise and his focus is on playing football and helping the team win, nothing more, nothing less.

Bourbon will get the first and best chance to prove he's worthy of being the top dog and he might win the job and be huge for the Jayhawks this fall. But remember, even with James Sims operating as the lead back during the past four seasons, there was room for guys like Darrian Miller and Taylor Cox to put their stamp on the KU ground game. With Miller gone and Cox trying to bounce back from multiple injuries, Mann could be in great shape to inherit that type of role and never look back.

If he can, that will do wonders for the entire KU offense. Not only would it help ease the burden on Bourbon, but it also would be huge for sophomore quarterback Montell Cozart, who likely will need help from all areas of the offense to settle in and become comfortable running the show. The talent's there for Cozart to be solid, but without the backs being reliable, the receivers and tight ends getting open and making plays and the line giving him time to think, his talent might not matter.

Mann's will. Even if he's not the leading rusher by season's end and even if he shares carries with a talented group that could even include senior Tony Pierson toting the rock a couple of times per game, I believe that Mann's skills and build will allow him to stand out on a regular basis.

If Bourbon is going to be the starting RB, I can't see how any other RB is rated higher than him barring the classification of Tony Pierson who at this point we should just label as athlete.

Yeah, I’m a little confused with this one. But hey, it’s not my list.

Basically Matt T. is predicting that Mann will beat Bourbon as starter on the depth chart.

Not exactly. I think Bourbon could easily be the starter all season but Mann could have a more important role, both in the way that he could prevent Bourbon from being overworked and in the way that he has a chance to be a solid back.

Given Bourbon's injury history, Mann being the starting back at some point this year isn't a big stretch. RB is the one skill position where you can never have too much depth simply because of the wear and tear on the body of that position.

This guy will be a HUGE part of the offense... mark my words