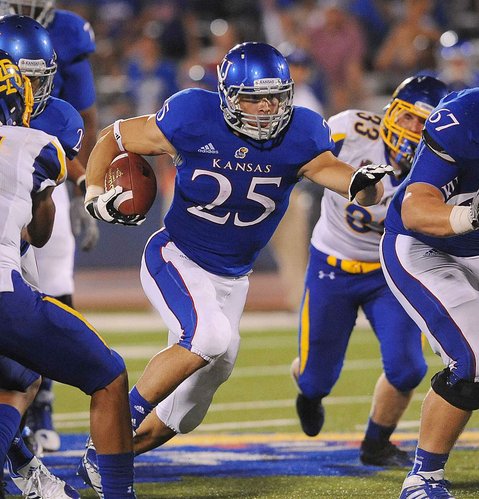 Kansas University running back Brandon Bourbon (25) rushes against South Dakota State on Sept. 1, 2012, at Memorial Stadium. Bourbon, a fourth-year junior, says he feels better than ever after an injury-riddled start to his KU career. by Richard Gwin

It's been a long road for Brandon Bourbon to reach the top of the depth chart.

Between injuries, which he's endured during most of his seasons at KU, and James Sims getting carries ahead of him, Bourbon, the former four-star prospect who at one time had committed to Stanford, has logged just 63 carries during his first four seasons in town and had a tough time finding any kind of rhythm amidst his sporadic playing time.

While outside factors have contributed to that in the past, Bourbon will have no one to blame but himself if things don't change in 2014.

He enters fall camp as the team's top back, largely because — of all things — he was the healthiest returning running back from last year's team. Winning the starting job and becoming a factor in KU's new-look offense will not be easy, but Bourbon seems more at peace with life and football today than he has in the past four years and does not seem to be threatened by the presence of a stable of talented and hungry backs at his position.

Taylor Cox, De'Andre Mann and Corey Avery — and maybe more — figure to be Bourbon's main competition for carries this season, but if Bourbon were to hold them off for the lead dog role played by Sims during the past four seasons, it would do wonders for this team's diversity on offense.

With each back in the system being a little bit different, having one horse to handle the tough carries and be a consistent force could keep the others fresh and allow first-year offensive coordinator John Reagan to get creative in how he uses them.

Provided he stays healthy, Bourbon is fully capable of handling such a role. His blend of size, power and speed gives him great potential, and his career, to this point, has been highlighted by his big-play prowess.

I talked to Bourbon this spring about the opportunity ahead of him and, although he loved Sims and bonded with him like a brother, he said he was thrilled he was gone because, for the first time in his career, he really felt like there was an opportunity for him to be the guy.

We'll see how it plays out, but Bourbon taking the reins from his good buddy would be a big boost for the KU offense.

Would love to see this guy EXPLODE this season. Lets go Brandon !

Tait, any info on Fondal still being on the team? Short's eligibility?

Heard some rumblings about Short and I'm looking into it... Haven't heard much about Fondal, but I'll do the same there ASAP.

Would be a pretty big blow if something prevents Short from being out there again this year.

Interesting that Wrench is not mentioned in the list of RB competition.

Were there whispers that he has eligibility issues?

Either way, it would be awesome if Brandon could have a Cornishian season / finish to his collegiate career.

Yeah. I wouldn't count on Wrench being here if I were you. Could happen, but very easily could not from what I'm hearing. We'll know fairly soon.

This team is falling apart.

There's approximately 85 players on the team; some won't make it.

Brandon Bourbon is a smooth running back. He needs to grind out chunks of real estate for this team to be successful.