Here's this week's final installment in our series that examines the Jayhawks who stand to have the biggest impact for KU football this fall. Look for Nos. 15-11 next week, beginning on Monday. 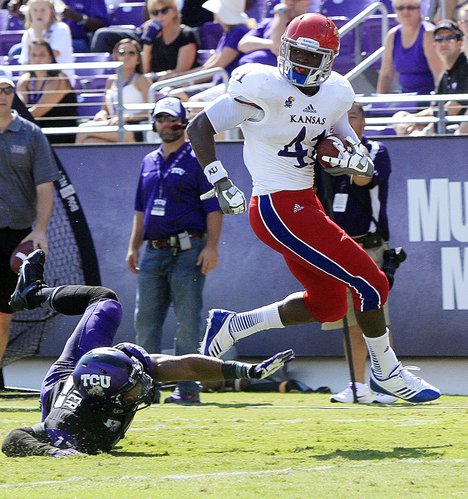 Voted second-team preseason all-Big 12 by several publications that cover the Big 12, Mudine will be the first to tell you that finishing there would be a disappointment.

The senior leader from Denison, Texas, has been labeled with tremendous potential since he arrived in Lawrence and now, with his final season of college football right around the corner — and pro football aspirations still present in his mind — Mundine is hellbent on proving that he's been worth the talk.

The presence of wide receivers Nick Harwell, Tony Pierson and Rodriguez Coleman, as well as mobile quarterback Montell Cozart, should spread the field as much as possible and give Mundine all kinds of room to work in the middle. Provided he can put the drops that plagued him in 2013 behind him — and there's no doubt in my mind that he will — Mundine could be in for a monster season.

He'll need help, of course. The offensive line will have to hold up long enough to give Cozart time. And Cozart, still a rook in a lot of ways, will have to show he can both get the ball to Mundine where he needs, wants and likes it and have enough command of the offense to put pressure on opposing defenses and take advantage of making them have to cover the entire field.

With his big body, strong base and good athleticism, Mundine is a potential match-up nightmare for opponents, too big for corners to cover and more athletic than many expect. Even with all of the drops and losses during the past couple of seasons, Mundine always maintained that his never was a confidence issue. He didn't get down on himself too much and instead chose to focus on the next play, the next game, the next chance to make a key grab. That mentality should serve him well this season, when he'll likely hit the field with a nothing-to-lose mindset.

Mundine's a hard worker with a great attitude and strong drive. Winning and succeeding mean a lot to him. Senior urgency can be overplayed at times, but, in this case, I think it's a potential gold mine for the KU offense.

He’ll also need to block a lot more. Under Reagan, I’m sure they’ll have plenty of designed runs for Cozart and Mundine will need to be effective springing him to the next level.

A tight end is often a security blanket for a young quarterback. It will be very interesting to see how both Cozart and Mundine grow this season.