Here's the second installment in our series that examines the Jayhawks who stand to have the biggest impact for KU football this fall. 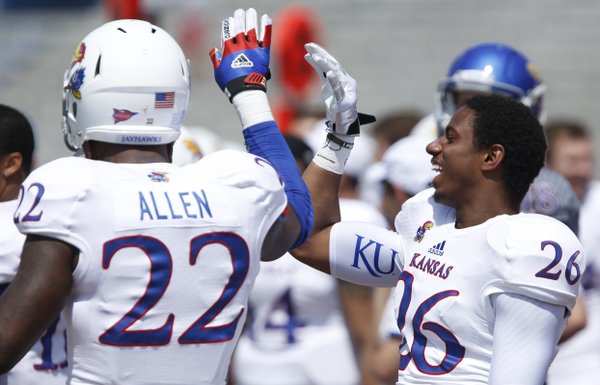 White Team defenders Greg Allen and Brandon Hollomon celebrate a stop by the White Team during the first half of the Kansas Spring Game on Saturday, April 12, 2014 at Memorial Stadium. Nick Krug/Journal-World Photo by Nick Krug

Last spring was breakout time for Allen, who has played very little during his first three years in Lawrence but finally stopped thinking so much and began playing on instincts.

If what he showed in March and April carries over into the 2014 season, that's good news for the KU secondary, which already features some of the team's top talent but would stand to gain some serious depth if Allen can become a player.

After jumping back and forth between cornerback and safety during his first few seasons in town, Allen spent most of his time this spring playing nickel back, which seems to be the perfect spot for a guy with his blend of size, speed, athleticism and power.

Simply put, Allen is the type of athlete that most of the other rosters in the Big 12 are full of. He has yet to make that count during his time as a Jayhawk, but the New Orleans native who went to high school in Houston seems finally to be ready mentally to not only play a big role but also prove he can play at this level.

Allen's development is a luxury for the Jayhawks. They don't absolutely need him to pan out, but doing so would tighten up the defensive backfield, which has a real chance to be one of the best secondaries in the Big 12 this fall.

KU coach Charlie Weis said at the end of spring ball that Allen had played so well that he was pushing senior JaCorey Shepherd for reps with the first string at nickel. If that holds, Allen would create depth at nickel and also allow Weis and company to use Shepherd as a back-up at either cornerback spot should the need arise.

Credit defensive coordinator Clint Bowen, as well as DB coaches Dave Campo and Scott Vestal for creating a defensive scheme that allows Allen to use his natural abilities and just play.

It's probably either this year or never for Allen and the signs from the spring point to him finally putting his stamp on the KU program.

Greg Allen has only been here two years. He will be a redshirt sophomore this coming season.

I expected a little more after his redshirt season, but what Campo has done with the secondary has made it tougher to crack 1st string. I’m guessing that his spring performance is no fluke though, and that we have indeed added quality depth to a talented group.

"Chance to be the best secondary in the Big 12". That might be a little bit of a stretch don't ya think ? Remember from last year our defense finished the season ranked around 100.

You are correct that other Big 12 teams have rosters that are full of athletes like Allen. But they also have much higher caliber of athlete within the roster as well.

Despite the lack of overall defense we had last year, I did see improvement in the secondary, which is likely a credit to Campo vs. Bowen.

Unfortunately, because we lack talent on the defensive line, it's difficult to see the full potential of the secondary, because opposing QBs get to lounge in the pocket for 8-10 seconds with no risk of a pass rush.

After losing a lot of experience on the line last season, and replacing with less experience and no obvious increase in talent, I suspect the D-line will again be a major weakness.

I don’t know about losing a LOT of experience on the line. Young only played DL for a season and a half and Tavai played two seasons of Big 12 football. We’re returning a defensive captain and best lineman in Stowers, along with Tedarian Johnson. Numbers 98 and 99 are going to anchor that line this year. Tyler Holmes should be much improved after a couple years in the program and Andrew Bolton could be a beast, we just don’t know yet.

I think we have the ability to be better on the Dline this year, my real worries for that unit rest in 2015.

Matt, is there an updated depth chart coming soon? Seems like there usually is after Spring practice... thanks.

I'm recalling that KU FB did release a Spring practice depth chart, and there was even an article about it, but link here is obviously old.

In some regards, it is meaningless tho, because we should have plenty of 1st year starters that weren't here for the spring.