The Day After: Texas 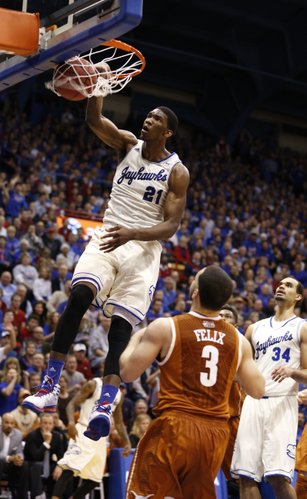 I don't know about you, but I definitely did not see a 31-point Kansas victory over Texas coming when I walked into Allen Fieldhouse on Saturday evening for what was billed as a key Big 12 Conference clash with potential title implications.

After watching Texas manhandle Kansas inside in the first meeting in Austin while guard Isaiah Taylor did whatever he wanted whenever he wanted to, I figured the Jayhawks would have their hands full again with a tough and underrated Texas team.

Don't get me wrong, I expected KU (21-6 overall, 12-2 Big 12) to prevail, but I thought it would be a nip-and-tuck, hard-fought, character-building victory. Instead, it turned out to be a celebration of the highlight and appeared to be a rather enjoyable evening for everyone in crimson and blue.

A big reason for that was the performance of the Kansas defense, which stifled Taylor and held the Longhorns' offense 23 points below its season average.

An impressive victory all the way around, one that set up the opportunity to clinch at least a share of consecutive Big 12 title No. 10 on Monday night against Oklahoma.

Whether it was pride, revenge, what was at stake in the Big 12 race or a combination of all of the above, the Jayhawks played one of their most impressive games of the season and did it with the kind of bounce and confidence that makes them tough for anyone to beat anywhere at any time. Although KU's defense played a big part in the victory, the game was basically a never-ending highlight reel of Kansas dunks and frenzy-inducing transition plays that buried the Longhorns before they even knew what hit them. Let's not forget that this was a ranked Texas team that absolutely owned Kansas a few weeks ago in Austin, and KU made them look like a bad mid-major team. The scoring was balanced, the defense was stifling and KU's three stud freshman were sensational, all without a single player having to play 30 minutes or more. This one had the feel of a victory that could help a team turn the final corner and serve as a key moment of clarity for what it takes to make a serious run when it counts the most.

1 – Kansas has a killer instinct and they weren't afraid to use it. Embarrassed in Austin, just three weeks earlier, the Jayhawks made this one personal and came out with every intent of one-upping the Longhorn domination they suffered in Austin in front of a frenzied home crowd that had been waiting a while for this one. After a semi-slow start, KU flipped the switch and went into attack mode the rest of the night.

2 – The Jayhawks' 26-0 dominating performance in fast-break points shows that the Jayhawks are starting to understand that tougher defense leads to easier offense. The 26 fast-break points scored against Texas were the second most for the Jayhawks this season — KU outscored Towson 29-8 in a 30-point victory in December — and it marked just the third time all season that KU has held an opponent to zero transition buckets. This becomes all the more important considering KU scored zero fast-break points itself in a one-point victory in Lubbock, Texas, just four days earlier. What's even more impressive is that KU has tallied single digits in fast-break points 17 times this season and Saturday's 26-point open-court explosion more than tripled KU's average heading into Saturday. 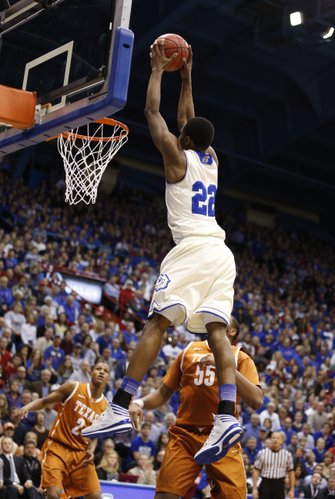 Kansas guard Andrew Wiggins catches a pass well above the rim for a dunk against Texas during the first half on Saturday, Feb. 22, 2014 at Allen Fieldhouse. by Nick Krug

3 – Andrew Wiggins, man. The KU freshman was so good in getting the KU offense going in this one that he simply could not catch and shoot the ball quick enough during one stretch in the first half when he appeared to be in the zone and feeling it perhaps as much as at any point this entire season. His numbers were good — 21 points and 6 rebounds on 7-of-12 shooting, 3-of-5 from three-point range — his defense was great and the whole package moved Wiggins higher on some pretty impressive freshman lists at KU. He now has 442 points this season, which puts him two points behind Brandon Rush for fourth place on the all-time freshman scoring list. With at least six games remaining and potentially as many as 13 more, expect Wiggins to continue to climb that list. He already owns the top spot for KU freshmen in free throws made (128), free throws attempted (169) and freshman scoring average at 16.4 points per game.

1 – Let's let out a big sigh of amazement for the night Tarik Black turned in, including a Blake-Griffin-esque throw-down over UT's Cameron Ridley and a monster finish of an alley-oop pass from Jamari Traylor. Black finished with 9 points, 5 rebounds and a steal in 15 minutes and has really carved out a nice role on this team. Something Tom Keegan and I talked about after the game was how interesting it would be to see Black play with Joel Embiid a little more. Maybe that's coming. Maybe it's not. Either way, it certainly appears that Black is playing with as much confidence as he's had all season. 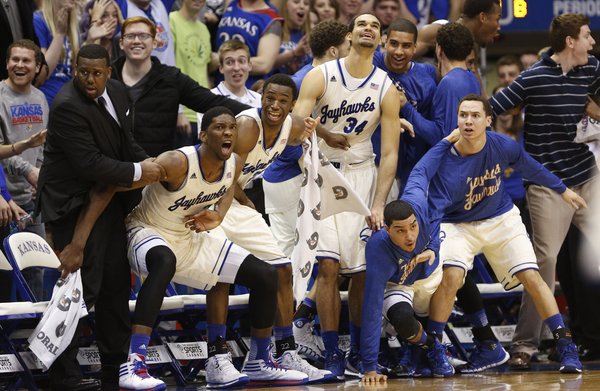 The Kansas bench reacts with disbelief after a dunk by forward Tarik Black sent the fieldhouse into a frenzy during the second half on Saturday, Feb. 22, 2014 at Allen Fieldhouse. by Nick Krug

2 – It hardly mattered in the grand scheme of things, but the Jayhawks opened both halves of this one with pretty sloppy play. UT's Jonathan Holmes scored six of the Longhorns first eight points and got them with ease. He also opened the second half with a mini-run, scoring five points in the first few minutes of the final frame while Kansas struggled to get into rhythm on offense and turned it over a couple of times. Neither sluggish stretch lasted long and, perhaps most impressive, Holmes only scored six points during the rest of the game.

3 – Naadir Tharpe's shot all of a sudden just won't go in. Although Tharpe did what was needed and then some on defense and added five assists, the junior point guard scored just 2 points on 1-of-9 shooting, including an 0-for-5 clip from three-point land. Most, if not all, of his shots were smart shots and looked good in the air, they just didn't fall. If you think about it, this could actually be a reason to smile, too, as the Jayhawks rolled and put up 85 without one of their top five scorers doing anything to put points on the board. Still, if KU is going to have much success in March, Tharpe is going to have to regain his stroke at some point in the next couple of weeks. In his last three games, the KU PG has made just 2-of-19 shot attempts, a number that improves only slightly — to 10-of-39 — during the past five outings.

Kansas guard Naadir Tharpe defends against a drive by Texas guard Isaiah Taylor during the second half on Saturday, Feb. 22, 2014 at Allen Fieldhouse. by Nick Krug

The Jayhawks' rout of Texas:

• Improved them to 21-6 on the season, against the nation’s most difficult strength of schedule.

The Jayhawks will jump back into action at 8 p.m. Monday at Allen Fieldhouse, where they will face Oklahoma for the second time this season. KU kicked off its Big 12 schedule with a 90-83 victory at Oklahoma on Jan. 8, when Wayne Selden went off for 24 points and drained 5-of-10 three-point shots. 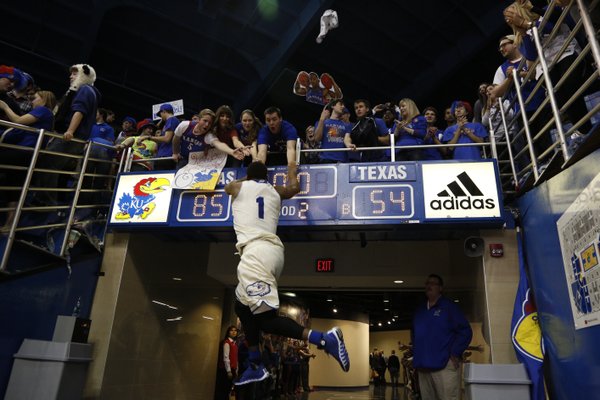 Kansas guard Wayne Selden jumps to slap hands with a row of Jayhawk fans after defeating Texas 85-54 on Saturday, Feb. 22, 2014 at Allen Fieldhouse. by Nick Krug

Here are a few highlights, in case you missed any of them or just want to see them again...

Matt, enjoy your "day after" takes. Where did you come up with "Tale of the Tait"? I think that is very clever. Would love to here that story!

Thanks. They've been pretty well received. Nothing ground breaking (most of the time) but a nice place to revisit the game that was with a collection of highlights and links all in one convenient place. Glad you enjoy it.

As for the blog name, there's no great story, unfortunately. A few years back, when we were trying to come up with blog names, a former colleague (Eric Sorrentino) and I were brainstorming ideas on the way over to the Big 12 tournament and I spit out one for his (formerly Conference Chatter) and he spit out one for mine (Tale of the Tait).

Like I said, not a great story behind the name, but there it is.

When you give us football "teaser" articles (which I love), maybe that could be Tait's Bait.

Conference Chatter was a good blog.

Tale of the Tait is a good blog name. Though it would make sense maybe for you and Benton to switch and you provide the "tale of the tape" comparisons for each opponent and whether KU or the opponent has the advantage, then Benton could give the recap, since that's kind what he does with the Eyes on KU and the NBA blogs...

I remember you're unveiling of Tale of the Tait, obviously you were football beat writer and you came up with the Blog right around Combine time. Was that in 2010 when Meier and Reesing were set to graduate and Briscoe was leaving, too? Weren't you going to try to put together an NFL combine competition with the KU Sports staff?

That was the time... Crazy to think back to how big of a draft that was for KU football.

As for the combine thing, I did one of my own where I trained with Kayl Anderson (former KU long snapper) one day and almost died in the process. Put up the video and everything. Loved it!

Thanks for sharing that! Keep up the great work, Matt!

Matt, I thought Selden's 7 asst was another reason to smile. He didn't score much, but he didn't need to. He used to run a team, and I really enjoy the way he feeds the team, he's capable of doing that, his passes sometimes look fancy but they are fast and hard for the opponent to steal.

Definitely agree. Selden was great. 8 points, 6 rebounds, 7 assists. He's really starting to assert himself more and more and I love the way he plays with such confidence on both ends.

Matt, You are becoming so good at what you do, I am beginning to worry about some large market stealing you. Can we sign you up to a long term deal with a huge buyout?