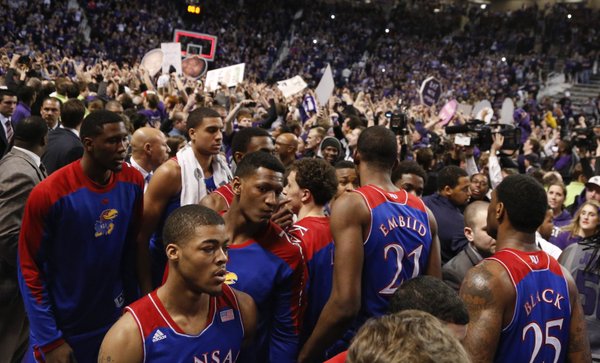 Kansas guard Frank Mason, front, and his teammates look for an exit from the court as the Kansas State student section celebrate following the Jayhawks' 85-82 overtime loss to Kansas State on Monday, Feb. 10, 2014 at Bramlage Coliseum. by Nick Krug

It was a wild night in Manhattan, with the home team — not to mention the atmosphere — winning out in an 85-82 overtime victory for Kansas State, just the fourth win for the Wildcats over Kansas in the past 52 games.

Despite 10 ties and 20 lead changes, K-State controlled things most of the way, taking advantage of poor Kansas defense and a cold shooting night from most of the Jayhawks' big guns.

KU never led by more than two points and only forced overtime because of a frantic stretch in the final two minutes. The Jayhawks opened the overtime with a Tarik Black layup to take a 71-69 lead, but Kansas State scored 11 of the next 15 points to take an 80-75 lead with 1:14 to play and then salted the game away at the free throw line.

There are a million stats you can point to that illustrate the reason Kansas came up on the short end of this one. The Jayhawks missed 11 free throws. They shot just 3-of-17 from three-point range (and one of the makes was a meaningless swish at the buzzer) and they allowed K-State to shoot 49.2 percent for the game, including 57.7 percent in the second half and 66.7 percent in OT. For my money, though, this one came down to the fact that the team that played harder and seemed hungrier came out on top. Credit the Wildcats and their coaching staff for that, along with the impact of the frenzied fans who filled Bramlage Coliseum. 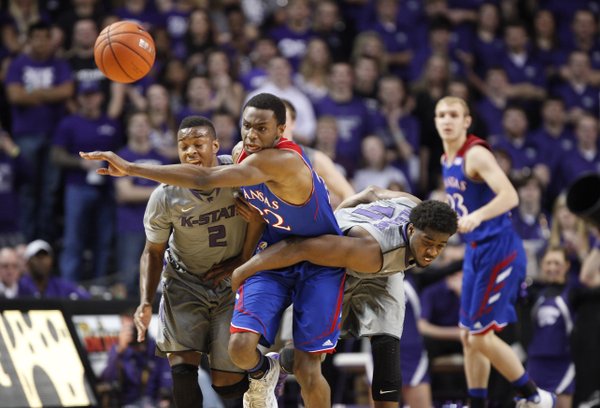 Kansas guard Andrew Wiggins tries to break through Kansas State players Marcus Foster, left, and Nino Williams for a loose ball during the first half on Monday, Feb. 10, 2014 at Bramlage Coliseum. by Nick Krug

1 – When you look at the aforementioned statistics and consider the way Kansas played out of sync all night, it's pretty wild to think they still almost came away with the victory. I don't think KU played all that well and I definitely think more than a few guys had really odd nights. But enough Jayhawks fought hard enough to force overtime and give KU a chance to win despite a pretty awful night on both ends of the floor. The fight shown by Andrew Wiggins, Naadir Tharpe, Perry Ellis, Tarik Black and Brannen Greene was the biggest reason.

2 – Speaking of Brannen Greene, he definitely made his case for more playing time if for no other reason than the heart he showed to help Kansas erase a nine-point deficit in the final 1:58. Greene's put-back dunk and steal and layup in a six-second stretch single-handedly gave KU hope. The freshman forward played just 15 of 45 minutes yet finished with 10 points, 5 rebounds and 3 steals. He leaves a little to be desired defensively and occasionally falls victim to mental lapses, but he's a gamer and he almost always carries himself with poise. I'm not saying start him, but it's cool to see him becoming more and more reliable. 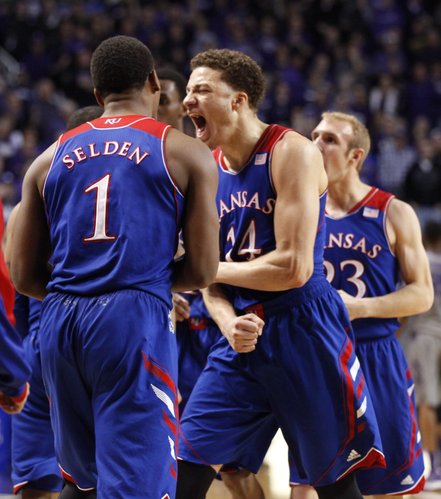 Kansas guard Brannen Greene (14) celebrates after the Jayhawks forced overtime against Kansas State at the end of the second half on Monday, Feb. 10, 2014 at Bramlage Coliseum. by Nick Krug

3 – After being virtually non-existent in the first half, Naadir Tharpe's second half was rock solid. His clutch buckets in the waning minutes kept KU breathing and took some of the pressure off of Wiggins having to do it all. Tharpe, who was scoreless in the first half, finished with 13 points and 10 assists in 38 minutes. He didn't shoot it that well (he was just 6-of-13 and 1-of-5 from downtown) but the ones he made came in tough spots.

1 – For the second time this season, the Wildcats exposed KU's half-court defense and scored a ton of points right at the rim. Forty percent of K-State's points (34 of 85) came on either dunks or layups, including 22 of 40 second-half points, good for 55 percent. A month ago, in Lawrence, the Wildcats had similar success (26 of 60 points at the rim for 43 percent) but it didn't matter because Kansas was great offensively and the Wildcats did not shoot the ball as well from outside the paint. In this one, though, it mattered a ton, as each KSU layup not only made it tougher for KU to crawl back into it but also appeared to deliver a significant mental blow. 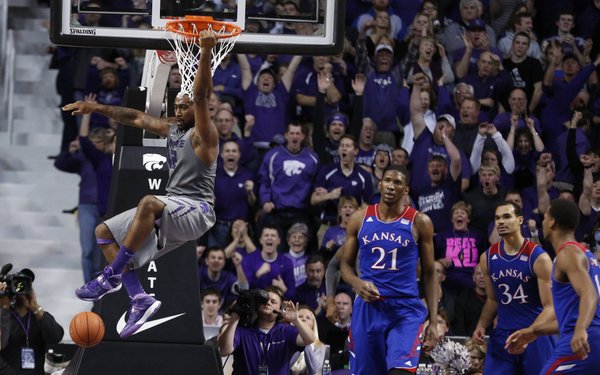 Kansas State forward Thomas Gipson comes down from a dunk before Kansas players Joel Embiid, left, Perry Ellis and Wayne Selden during the second half on Monday, Feb. 10, 2014 at Bramlage Coliseum. by Nick Krug

2 – It was another slow night for Joel Embiid, who contributed just 6 points and 6 rebounds in 18 injury-plagued minutes. It's not so much the production here that's a concern. It's the fact that Embiid is pretty banged up. KU coach Bill Self said after the game that the 7-foot center needed some time off and whether that means taking it easy in practice or perhaps even missing a game or two remains to be seen. Either way, it's definitely necessary because Embiid is not very effective right now and the team is suffering because of it.

3 – Although the details of his benching remain unclear, sophomore forward Jamari Traylor did enough to anger his coach and earn a permanent spot on the bench in this one. All kinds of rumors about how and why Traylor ticked Self off exist. They're irrelevant. What matters is that Traylor's poor judgement put his team in a bad spot, a fact of which he's very aware. After the game on Twitter, Traylor wrote to his followers: “I will never put myself in this position again...” On a night when Perry Ellis fouled out, Tarik Black reinjured his ankle and Embiid could only play 18 minutes, the athletic big man could have made a major impact for Kansas.

• Moved KU to 18-6 on the season, against the nation's most difficult strength of schedule.

The Jayhawks return home at 3 p.m. on Saturday to take on TCU, which currently is winless in Big 12 play. The Jayhawks rocked TCU 91-69 in Fort Worth, Texas, on Jan. 25 and will be looking to sweep the season series. 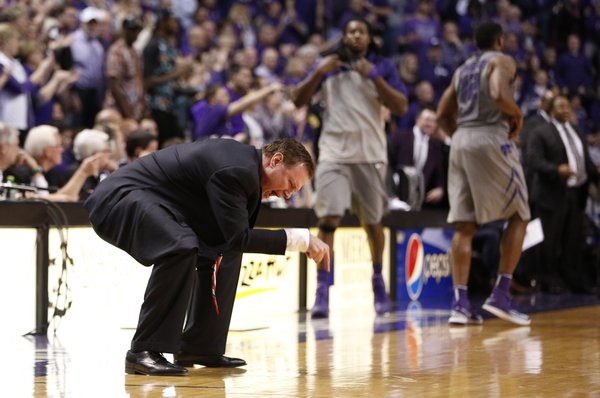 Kansas head coach Bill Self points to the floor while disputing a traveling call against forward Perry Ellis during the second half on Monday, Feb. 10, 2014 at Bramlage Coliseum. by Nick Krug

Id be lying if I said I didnt care about wins and losses, especially when the latter comes at the hands of Kansas State. But right now, Im much more concerned with the Jayhawks' level of play. We'll lose in the round of 32 playing like this. There are at least that many teams out there capable of showing Kansas the exit in March. Play has GOT to get better...

I have a feeling it is going to be a crazy NCAA tournament. I think every highly rated teams has flaws. KU is still in the driver's seat to win the conference. This is a young team and they should continue to progress.

Without Embiid and Wiggins playing well the Hawks are just average.

We were only a top 15 team before we snagged Wiggins.

It is all part of learning for this really young team.

KSU is probably about a top 30 team, especially on their own court.

I was also impressed by Conner. He made a fabulous read on his steal, and while he is still figuring out how to match up with the greater athleticism, he plays really reliable.

Was also a little concerned with Brannen in the one instance when the pass sailed right through his hands and out of bounds. Pretty sure that virtually an identical play happened earlier this year. Gotta value each possession, but he does bring a lot to the table.

I want to see Andrew White get some meaningful minutes...

...that boat has sailed. Spot minutes only. Too deep. Greene brings more, a 30s ranked recruit that has outplayed 50s ranked AW3. And, knowing Self, Greene may be outplaying AW3 in practice.

No question. Meant to tie that into No. 1 on the list, which discussed K-State's high percentage of layups and dunks. That was as much about poor defense on the perimeter as it was not having a presence in the paint.

2] Reinstate Jamari [but read him the riot act about a second offense].

3] Increase PT for Brannen and Conner [both showed a lot at KSU] and cut back on Selden.

4] Tell Naadir to defensively overplay on his man's weak side...he'll still get around Naadir but maybe be slowed enough to get switch off help.

5] Tell Wiggins to keep is eye on the rim and finish..and for God's sake keep shooting and driving.

6] Give Lucas some minutes in Jo Jo's absence.

Last time we talked about Coach cutting into Selden's minutes he exploded for 24 against OU, and 20 against KSU. I hope that the same happens again.

Wiggins, Selden, Greene, and Frankamp: none of them can afford to pass up a wide open shot. Tharpe needs them to release some of the pressure on him.

Tharpe should overplay his man to whichever direction the help defender will be coming, and should never switch a ball screen onto a player 10 inches taller than he is.