The Day After: Lapping Lafayette 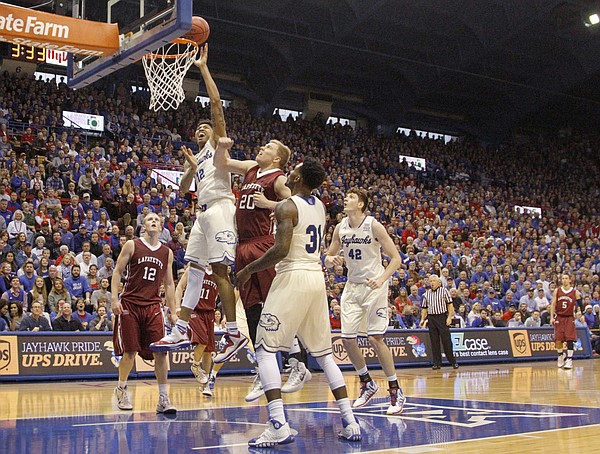 Following Saturday's 96-69 victory over Lafayette — a game that was actually a much tougher battle than the final score indicates — Kansas University men's basketball coach Bill Self explained that he no longer would divulge his starting lineups after Cliff Alexander and Brannen Greene both were held out of the starting five just one day after it was announced that Alexander would join the group for the first time this season.

Greene was late to weights on Friday, Alexander had what Self called a bad day of practice that same day and Landen Lucas and Kelly Oubre slid into their spots.

I get where Self's coming from on this, but, after what we saw on Saturday it might not matter whether he announces his starters or not. It might just be that obvious. If Oubre continues to make the progress he's making and plays at all like he played on Saturday, he'll be in there. No questions asked.

After that it'll come down to the fifth spot, where Landen Lucas, Jamari Traylor and Cliff Alexander look like the top three options. Lucas and Traylor have had their chances. And they've been serviceable. But Alexander's the best of the three and the odds are good that he'll figure out how to handle his business away from game night sooner rather than later.

If he does, the starting five is easy to pick out — Frank Mason, Wayne Selden, Kelly Oubre, Perry Ellis and Cliff Alexander — and KU fans won't need to wait for it to be announced by Self or anybody else.

There were plenty of good things and a few bad things about Saturday's victory, but the fact that this team can throw so many good shooters on the floor makes them tough to handle. KU has shot the ball well from the outside through the first 10 games of the season and Self said before the season that he thought this group would be the best three-point shooting team he's had in a while. He was right. Mason, Selden, Oubre, Greene and Sviatoslav Mykhailiuk all can knock down the three if given room and, with Perry Ellis and Cliff Alexander doing enough inside to occupy the paint, these guys are getting a lot of open looks and that should continue. KU is shooting just under 40 percent (62-for-157) from three-point range so far this season, and six different Jayhawks are shooting 34 percent or better from downtown. The Jayhawks were 12 of 23 from the outside against Lafayette and that clip helped keep the scrappy Leopards from creeping too close in the second half.

1 – We already mentioned Oubre's big game, but it's worth mentioning again. The guy scored 23 points on 9-of-15 shooting and grabbed 10 rebounds, blowing out of the water his previous career-highs in both areas. But it was not just the final numbers that made his day so impressive. It was the way he got them. Oubre was aggressive, smooth, confidence and cagey. And he picked up his big line in relatively easy fashion. In fact, a single play in the first half that delivered two of Oubre's six misses might have been one of his most impressive moments. After misfiring on a wide open three-pointer from the left wing, Oubre immediately followed the miss, caught the rebound in mid-air and went right back up for what looked like it would be an easy put-back. It wasn't, as Oubre's follow had a little too much behind it and the second shot came clanging off the rim. Rather than get discouraged, Oubre dug in, kept fighting and saw that mentality pay off. He seemed pretty matter-of-fact about the game afterwards and it should be interesting to see how he responds to the breakthrough on Monday night. 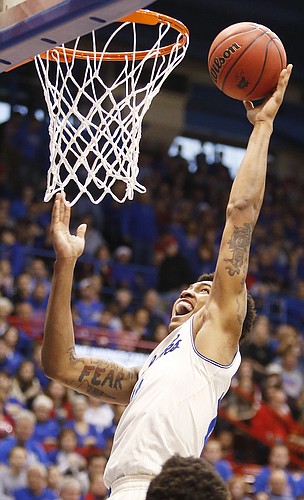 2 – Welcome back, Svi. After looking out of sorts during the past few games, Mykhailiuk regained his old form and again looked sharp on Saturday. He scored 11 points, made three three-pointers, played 22 minutes and appeared to be having fun again. He also dished two assists and picked up a steal and appeared to be thinking less and playing loose a lot more. There's no doubt that seeing his outside shot fall again lifted his confidence. 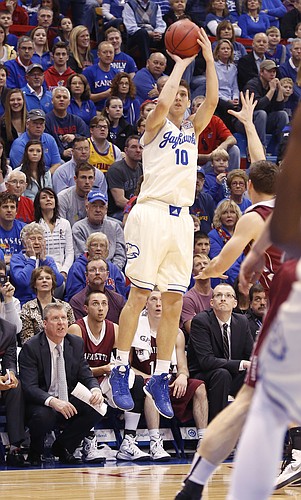 Kansas guard Sviatoslav Mykhailiuk (10) shoots in a three-point basket in the first-half against the Lafayette Leopards Saturday, Dec. 20, 2014 at Allen Fieldhouse.

3 – A lot of KU fans want to talk about this team's tendency to let big leads slip away, but I don't think that's cause for concern, or at least not too much concern. Teams are going to make runs. Opponents aren't going to quit. In fact, they're probably going to play even harder when facing a big, double-digit deficit. That's to be expected. And the mark of a quality team, at least in my mind, is when it can watch a big lead slip away and find a way to dig back in and build it back up in the minutes that follow. KU did that a couple of times against Lafayette and these Jayhawks appear to be comfortable operating that way.

1 – KU has looked pretty good defensively when the games have gone up and down this year, but the Jayhawks struggled to keep the Leopards from finding their rhythm behind the three-point line in this one. The only reason this is worth sighing about is that it should have come as no surprise that Lafayette was going to fire away from the outside. KU's latest opponent came into Allen Fieldhouse shooting 42 percent from three-point range and had nothing even close to resembling an inside presence. Still, Lafayette knocked down 12 of 26 three-pointers (46 percent) and used the long-range bomb to crawl back into the game after KU looked to have put things away by halftime. With KU's depth, length and athleticism, there should not be too many teams that get as many easy and open looks from the outside as the Leopards did on Saturday. 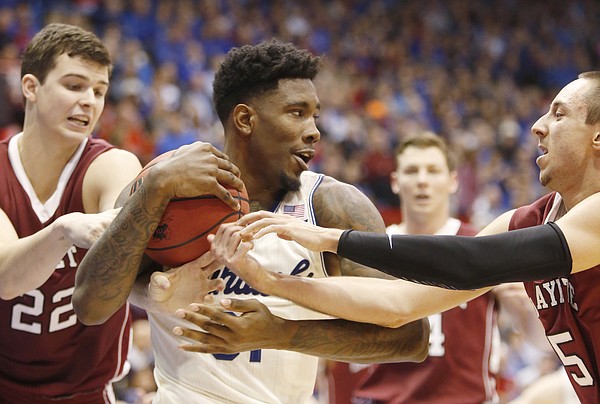 Kansas forward Jamari Traylor (31) gets wrapped up by Leopards defenders in KU's 96-69 win against Lafayette Saturday, Dec. 20, 2014 at Allen Fieldhouse.

2 – Landen Lucas may not only have lost his starting job, but he may also have lost a good chunk of his minutes. The big man who made a late start in place of Cliff Alexander played just six minutes and went from being in the starting lineup at the beginning of the day to being on the floor in the final two minutes when Tyler Self, Evan Manning, Josh Pollard and Christian Garrett were getting their time, as well. Lucas missed the only two shots he attempted, including a bad miss of a sweet dime from Selden, and grabbed just one rebound and picked up one foul. Self has said he'd like to play five perimeter guys — Mason, Selden, Greene, Svi and Oubre — and possibly four big men, with Ellis, Alexander and Traylor being locks. That leaves that final spot to a battle between Lucas and Hunter Mickelson. And I don't think you have to look any farther than Saturday to see who might be in the lead there. Oh, and that could quickly turn into six perimeter guys and three bigs if Devonte' Graham can come back healthy. 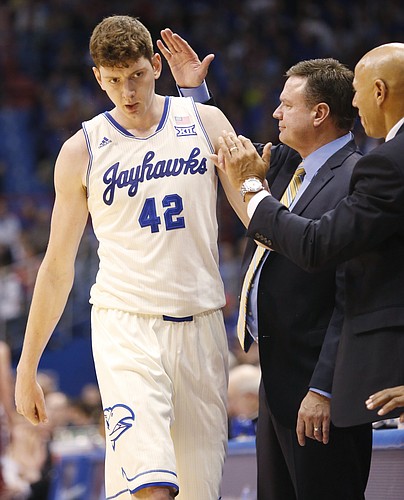 3 – It's a minor thing but I noticed it a few times during Saturday's victory. Jamari Traylor seems to have a hard time closing the door on the trap when the Jayhawks pick up with some full-court pressure. It's not something to be too concerned about given the fact that the other team's point guard should be quicker than Traylor and able to avoid getting trapped, but it just looked like Traylor struggled to execute when he was asked to do this. He didn't use the sideline to his advantage, got caught bouncing instead of closing out and put the Jayhawks at a numbers disadvantage by doing it.

KU's victory over the visiting Leopards on Saturday:

• Made the Jayhawks 9-1 or better for the second time in the past three seasons and the sixth time in Bill Self’s 12 seasons at KU.

• Pushed KU to 1-0 all-time versus Lafayette and 9-2 against current membership of the Patriot League.

• Made Kansas 4-0 in Allen Fieldhouse this season.

The Jayhawks will travel to Philadelphia for their final game before Christmas on Monday against Temple at the Wells Fargo Center. Tip-off is scheduled for 6 p.m. and the game will be shown on ESPN2. After that, KU will close out 2014 at Allen Fieldhouse on Dec. 30, when the Jayhawks welcome Kent State to town for a 7 p.m. game on Jayhawk TV. I must admit it is alot of fun being the team draining threes and not the team being drained on! I hope we keep it up this is a fun team to watch.

The last few years, we didn't recruit folks who could shoot from the perimeter in such a consistent basis. That has not only causes us issues (esp. against ISU & in the tournament). I believe we are better prepared for most types of teams now.