Mid-year signing day opens with a flurry for KU football 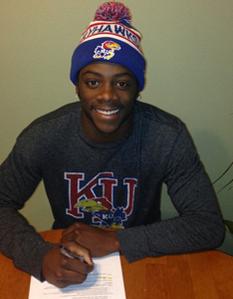 Defensive Back L.B. Bates, of Trinity Valley C.C., signed his official letter of intent with Kansas football early this morning. by Matt Tait

It looks like everything worked out with Blinn College offensive lineman Jayson Rhodes' transcripts because KU is now announcing him as a member of today's mid-year transfer haul.

Rhodes, who got in with KU late after offensive lineman Delonte' Murray changed his mind and signed with Cincinnati, is a 6-foot-4, 310-pound guard who had offers from Grambling State, Hampton, Louisiana-Lafayette, Louisiana-Monroe, Southern Miss and UT-San Antonio.

He'll arrive at KU in time for spring football and will have three years of eligibility remaining, which makes him a guy the KU coaching staff can bring along slowly if need be. That's not to say he'll need it, just that they'll have that flexibility.

The addition of Rhodes brings KU's total haul for the day to seven — 3 offensive linemen, 2 defensive backs, 1 defensive lineman and 1 running back.

Here's a quick look at Rhodes' film and bio.

RHODES BIO: Played one season at Blinn College under head coach Keith Thomas... Helped lead the Buccaneers to a 4-4 mark in 2014... Earned second team all-conference honors in 2014... Started the season on the defensive side of the ball, before moving to the offensive line... Sat out the 2013 season as a redshirt.

It's not quite the spectacle that national signing day in February brings, but it's important nonetheless. And it's already well under way for the Kansas University football program.

Mid-year transfer signing day offers those junior-college players who were able to graduate in December the chance to sign their national letters of intent early so they can report to their new schools in time for the spring semester, which begins in late January, and, more importantly, the start of spring practices.

Here's a quick list of the new Jayhawks who made it official this morning, starting with Kilgore College cornerback M.J. Mathis, who signed his letter at 8 a.m. in his hometown of Crosby, Texas, with a few close friends and family members present. 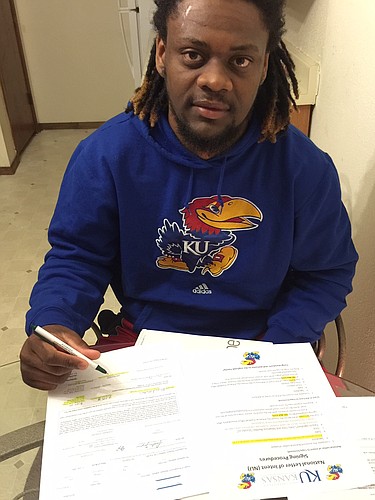 New KU cornerback Michael Mathis, from Kilgore College, was one of five players to make their commitments official this morning on mid-year transfer signing day. by Matt Tait

Mathis, a 6-foot-2, 210-pound corner with a good mix of physical presence and legit speed, said signing his letter was an amazing feeling because it put an official end to a couple of stressful months that came with waiting for KU to change coaches and signing day to arrive.

Here's a quick look at some Mathis highlights:

Other new Jayhawks who signed this morning include:

• Will Smith, a 6-foot-4, 315-pound, three-star offensive lineman from Butler Community College, who committed to KU in early June after an official visit.

SMITH BIO: Played two seasons on the offensive line for the nationally-ranked Grizzlies... Coached by Troy Morrell at BCC... Earned a three-star rating from Rivals.com and 247Sports.com... Saw action in 11 games for the Grizzlies, helping them earn an 8-3 overall record in 2014... Picked up all-conference and all-region honors in 2014... Helped lead the Grizzlies to the 2013 conference and region titles.

• Jacky Dezir, a 6-3, 305-pound, two-star defensive lineman from College of DuPage, who also committed to KU in early June after an official visit.

DEZIR BIO: Spent two seasons at the College of DuPage playing for head coach Matt Foster... Sat out the 2014 season as a redshirt... Played in 10 games for the Chaparrals, helping them earn a 7-4 record in 2013… Recorded two sacks in the 2013 Carrier Dome Bowl against ASA College… Recorded 24 total tackles during the 2013 season, including 13 solo tackles... Also credited with 3.0 TFLs.

BATES BIO: Spent two seasons at Trinity Valley Community College suiting up for head coach Brad Smiley… A three-star prospect according to Rivals.com, 247Sports.com and Scout.com... Played as a cornerback on the 2014 team that was a perfect 12-0 in 2014… Helped lead the Cardinals to the SWJCFC championship, the Region XIV championship and the Heart of Texas Bowl title in 2014... Recorded 26 total tackles, including 16 solo stops, as a sophomore in 2014... Led TVCC with four interceptions... Also had four pass breakups... Spent the 2013 season as a redshirt... Collected 11 tackles and one pass breakup for TVCC as a freshman in 2012.

BANKS BIO: Played two seasons at Trinity Valley Community College for head coach Brad Smiley… A three-star prospect according to Rivals.com... Saw action as an offensive guard on the 2014 team that went undefeated (12-0) in 2014… Helped lead the Cardinals to the SWJCFC championship, the Region XIV championship and the Heart of Texas Bowl title in both 2013 and 2014...Spent the 2012 season as a redshirt.

"Coach (David) Beaty is a great guy and has a plan for the program,” Banks said shortly after committing. “I want to be a part of it. The facilities are excellent and it feels like a tight-knit community."

• Ke'aun Kinner, a 5-10, 185-pound, three-star running back from Navarro Junior College, who committed to KU earlier this week and was named a first-team Juco All-American on Tuesday.

Does Dezir have two or three years of eligibility given he redshirted?

I would add, any word why Dezir redshirted his sophomore season?

Along those lines, the highlights are his freshman highlights, which is all the more impressive. Even there he looks like a big boy. Love that he pursues and makes the tackle on sweeps on the opposite side of the field from him.

Considering where we were left after the season with so many seniors leaving it is nice to see us bringing in this many mid year transfers. It only helps us to have more bodies and more competition at spring practice. I wish these videos were longer. The videos were awesome, but gave such a small sample.

My immediate reaction to these guys does not hold any weight, but Mathis looks aggressive and like a great tackler, but lacks some athleticism. He reminds me of Sendish. Smith looked very average. Nothing of note stood out in his small clip. Dezir appears to have a nice motor and great desire. He pursues really well. If he can get lean and stronger he could turn into a really nice interior lineman. Bates looked fantastic. Aggressive, smart, sure tackler, got his head around on deep passes, and good hands on a few interceptions. He might be seeing minutes this season. Nothing stood out physically for Banks, but he is a big nasty and finishes and thats always good. Kinner has legit speed. Thats all I can take from his video. I didn't get to see any broken tackles or ankle breaking jukes, but its nice that he had so many runs where those things were not needed because he was just that much faster. Looks like a good crop of kids. Hard to really tell with such short clips, but at least they have the ability to do some of great things. I'm really looking forward to seeing this class and coaching staff fill out and take some steps forward.

Not sure about all of the commits, but Kinner's tape on the Hudl site was long enough that I stopped watching and included plenty of nice moves though his OL gave him plenty of daylight as well. That's basically my go to site for visual info on players.

Thanks for the videos.

Fresh Prince is now a Jayhawk!

At least on paper, all of these guys address critical needs. That's a good start.

Any rumors about a conditioning coach? That seems to be the most important hire at the moment.

One of Bates' highlights (in the end zone, R sideline) was flagged. Appeared to be a blow to the head. The pass had already been broken up, so not as smart as apparently spectacular.