2015 Jayhawks have some talent but may lack depth

New KU football coach David Beaty on Monday made it clear that he understood the challenges he was stepping into by taking the job to lead the Jayhawks in 2015 and beyond.

Although the list is long and includes everything from production on the field to mending fences off of it, it seems one of the best places to get a clear look at Beaty's biggest challenge is by scanning the potential depth chart heading into the 2015 season.

Gone are 21 seniors, many of whom played key roles — especially on defense — on this year's team and during the past few seasons, as well. In some areas, there are obvious options to replace them. In others, the question of "Who's next?" is a little tougher to answer.

Several weeks ago, Tom Keegan looked at KU's Top 10 returning players but did so from a 1-through-10 perspective. All of those guys will be on the list you're about to read, as well, but instead of a Top 10, I'll give you a Top 22, as in an incredibly early look at a starting 11 on both sides of the ball for the 2015 season.

There's no doubt this will change between now and September. Heck, it'll probably change between now and February and again by the start of spring practice sometime in March. But it never hurts to look ahead and, in doing so, I think you'll see that Beaty is inheriting a team with some significant returning talent but an alarming lack of depth.

Most of this is based on the guys who have experience, which, for now, is as important a factor as anything. We'll get into the guys who could knock them off — think defensive lineman D.J. Williams, incoming cornerback Michael Mathis and a couple of other guys like that — in future blogs.

Also for the sake of this blog, we'll assume the Jayhawks are going to go with the same base defense they used this year. 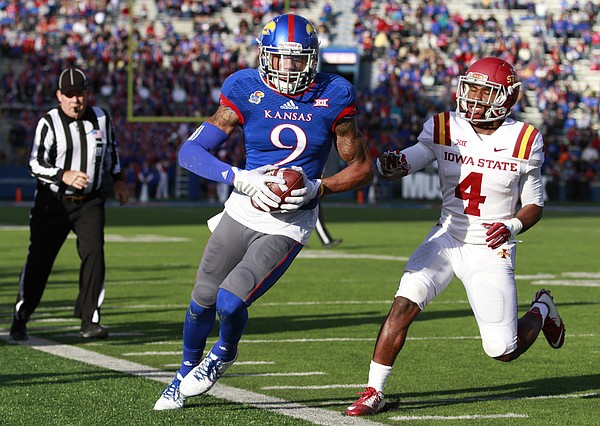 Kansas receiver Nigel King is forced out of bounds after a catch against Iowa State defensive back Sam Richardson during the second quarter on Saturday, Nov. 8, 2014. by Nick Krug

QB – Michael Cummings – Freshman-to-be Ryan Willis will be an intriguing option here, but Cummings earned the right to be the man to beat with his play this season.

RB – Corey Avery – De'Andre Mann is also back and both should be better than they were this season.

LT – Larry Mazyck – With another offseason to work on his skills and his body, the big man could be a nice option here.

LG – Joe Gibson – Filled in well at Center this season, but should be able to transition to guard with no problem.

C – Jacob Bragg – He doesn't have any experience, but guys kept mentioning his name.

RG – Junior Visinia – Picked up some incredibly valuable experience down the stretch and should only get better.

RT – Jordan Shelley-Smith – I really think this guy is going to be solid for a couple of years.

TE – Ben Johnson – Filled in nicely for Mundine from time to time and brings similar athleticism and good hands.

WR – Nigel King – The unquestioned No. 1 option on this team. His chemistry with Cummings should be a big advantage.

WR – Tre' Parmalee – It's possible one of the young guys beats Parmalee out, but he's a solid route runner and a reliable option who's been out there plenty.

WR – Kent Taylor – I always heard the transfer from Florida was best out wide and I don't think it's a stretch for him to transition to WR with Johnson holding down the TE spot.

BUCK – Ben Goodman – The move to the interior was not one that should stick. Time to put him back at his natural position.

NT – Andrew Bolton – After a slow start, he had some very good moments during the second half of the season.

DT – T.J. Semke – This is a prime spot where you could see an upgrade, but I guarantee you Semke's not going to give up the job easily.

SE – Kapil Fletcher - Damani Mosby and Anthony Olobia also could factor in here, but Fletcher was the only one of the trio who actually played in 2014.

WLB – Courtney Arnick – He quietly had a solid season and fits the mold of the modern-day Big 12 linebacker.

MLB – Jake Love – Filled in for Heeney whenever he needed to and, at times, was just as effective. Don't forget about Kyron Watson or Joe Dineen in these spots.

CB – Matthew Boateng – Thrown to the wolves as a true freshman, Boateng showed some good things early and should be ready for a bigger role.

CB – Michael Mathis – Ronnie Davis, Colin Spencer and a couple other guys could be options here, as well, but I've heard nothing but good things about Mathis and his spring semester arrival should make him ready to go by September.

FS – Isaiah Johnson – Back for a third season, he will be counted on to be more like the 2013 Johnson than the 2014 Johnson. 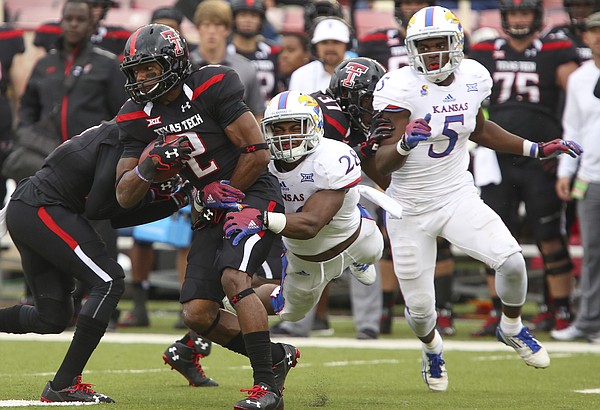 The cupboard is not bare. We will field a respectable team next year

A successful season would be two or more wins.

There's some decent front line guys next year, but as this article points out, a lot of unknowns after that. Personally, unless an incoming player earns a two deep spot, redshirt them and help future depth by doing that.

QB: Cummings is the man, the battle will be to be his back up. How mobile is Willis? Rivals calls him a pocket passer, so is he a statue in the pocket or someone who has enough mobility to make plays with his feet when necessary?

RB: Depth will still be an issue, but that could change overnight in recruiting since RB is a position where freshmen can contribute immediately.

WR: King could put up All-Big 12 numbers next season, beyond him there's not a lot of proven depth.

TE: One of the few positions where KU should be in decent shape.

OLine: I really like Junior Visinia and I think Mazyck should be better with another offseason of work.

DLine: Goodman has been solid when he's in and Semke is the toughest player on the team, but I think he'd be better at DE instead of DT. Lack of depth will hurt for the next 2-3 years though.

LB: I think this will be the strongest position group on the team next year.

DB: I think Boateng has a very bright future, but might be rough going next year. Which Isaiah Johnson shows up next year?

Cummings earned his time this year, but I'm not sleeping on Cozart for next year. New coach, new system... who knows. Cozart was good when he was good. But pretty bad when he was bad.

Whatever happened to Skylar Miles? Was supposed to be a 3-4 star linebacker...

Good question. I was wondering the same thing.

I just forgot about Miles. As long as he's healthy, he'll be in the mix for playing time because he's got some pretty decent experience. Injuries have derailed his career a little bit, but he's a guy worth keeping an eye on.

Are Cox and Bourbon still planning to be back? I thought so, but they are never mentioned.

I was going to ask the same question... I thought they each had one year left due to injury hardship... Any insight, Matt?

Those years aren't guaranteed. Each guy will have to apply to get another year and they're in the process of figuring all that out. My guess now is that one or the other could be back but not both. And I think Cox has a better shot of getting the waiver granted than Bourbon does.

I think Olobia and Mosby will challenge Goodman for the Buck while LaTrion Jones will back up Fletcher.

I'm definitely interested to see what Mosby and Olobia bring to the table. Hard to know since we didn't get a look at either guy last year. Long way to go before either becomes a factor, though. Should be interesting to follow their progress.

Whatever happened to the highly touted LB transfer from Florida?