With Manning moving on, Tulsa's next coach could be easy to find

While the news about Danny Manning being hired by Wake Forest obviously is a big deal for the former Kansas University star and assistant coach, it's also potentially huge news for another former Jayhawk.

Brett Ballard, a former KU player and assistant in his own right, now sits in the win-win position of either moving on with Manning to Wake Forest or gunning to become the next Tulsa head coach himself.

Ballard, 34, may be considered a longshot for the job given his lack of Div. I head coaching experience, but those who know him know that he is absolutely ready for this kind of challenge.

For Ballard, the chance to run his own program at this high of a level at this point in his career would be considered a major coup. But he should not be overlooked simply because of his age. He's one of the sharpest guys I know and has dedicated himself completely to every coaching position he's ever had. From his time as the KU video coordinator who used to hit up his friends for VCR help back in the VHS days to his two seasons as the head coach at Baker University, where he engineered a strong turnaround and brought a new kind of commitment, discipline and standard to the BU program, Ballard always has seemed to be on the right path to a coaching career.

Ballard also has proven his mettle in different roles along the way, most notably KU's director of basketball operations. And few young assistants have the kind of sterling resume that Ballard has, having played under Roy Williams and coached under Williams, Bill Self and now Manning. You don't spend as much time as Ballard has around those guys (and several top-flight assistants) without picking up a few tricks of the trade.

Look no further than former KU assistant and current Southern Illinois head coach Barry Hinson for proof of that.

“It’s a mini-Kansas,” said Hinson of Ballard's time at Baker during an interview with KUsports.com's Tom Keegan. “They’re running all of our stuff, and they’re running it great. Matter of fact, I’m sitting here thinking, ‘Gosh, some of the stuff they’re running better than we are.’ And, obviously, you can see he’s got a touch of coach Self in him because here we are with two minutes to go in the ballgame and the other team has 38 points.” 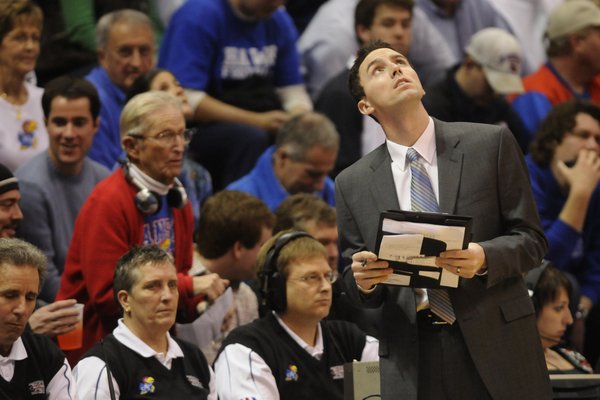 Former Jayhawk guard and director of basketball operations Brett Ballard checks the scoreboard during a timeout in this Dec. 20, 2008 file photo from Allen Fieldhouse. by Nick Krug

For Tulsa, hiring Ballard would be a gamble but it would give the Golden Hurricane an opportunity to obtain something they have struggled to find throughout the years — consistency and stability.

Known as a launching pad for some future big-time coaches — Manning very well may be en route to becoming the latest — hiring Ballard would give Tulsa the chance to lock up a young coach who likely would be very happy to stick around for several years while building both his own career and the program. It also would give TU the chance to keep alive the momentum that Manning created during the past two seasons and be a strong hire for the hope of keeping Tulsa's talented roster in tact.

What's more, Ballard probably could be had for relatively cheap, leaving room to hand out more money to top-notch assistants who have strong experience in Ballard's perceived areas of weakness.

Beyond that, it's not as if hiring guys around Ballard's age is at all unheard of. Current Florida coach Billy Donovan got his first Div. I coaching job at age 28 (Marshall), Shaka Smart was hired by VCU at 32, Richard Pitino was hired by Minnesota at age 30, Kevin O'Neill was hired by Marquette at age 32 in 1989 and that same school just recently announced the hiring of 37-year-old Steve Wojciechowski, who comes from Duke and has no head coaching experience.

Although it was Manning's name, vision and direction that engineered the Tulsa turnaround that led the Golden Hurricane back to the NCAA Tournament for the first time since 2003 in just the staff's second year, Ballard was his top aide from Day 1 and put in the kind of time and effort that made it abundantly clear that he not only was serious about his craft but also capable of making an impact at a big-time program.

The Tulsa opening is a great job and it will attract all kinds of fantastic candidates, both up-and-comers in the business and older, veteran-type guys who may be looking for one last stop to settle into. The TU administration will have several good choices as it seeks to fill the vacancy created by Manning's departure.

Even if he's not the guy they end up going with, Ballard should be one of the guys TU strongly considers. 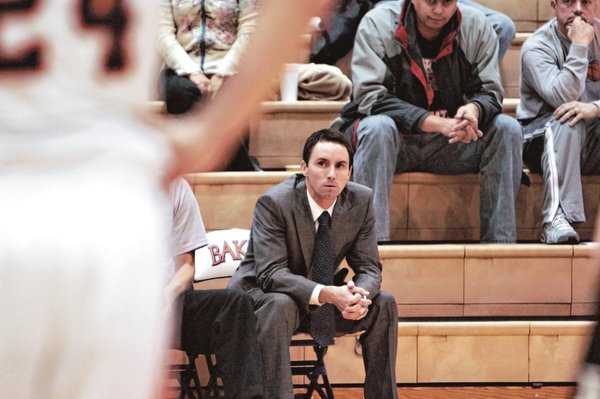 Baker University Head coach Brett Ballard Watches his team as it plays Evangel on Dec. 7 in Baldwin City. Ballard, a former Kansas University player and assistant for coach Bill Self, has coached Baker to a 9-3 start in his second year with the program. by Baker University Athletics

Matt, just curious. Has Ballard or anyone near him indicated that he'll be going after the Tulsa job? Or is this purely speculation on your part? I just wonder if he's been looking at coaching openings as they've come up, or if he's content to keep being Danny's top assistant for a while longer, particularly at a place like Wake Forest.

Good question. Brett is definitely interested in the job. I think he's very happy to be a part of Danny's staff and would gladly go with him to Wake Forest if Tulsa's not interested... But since he's also a competitor and wants to be a head coach someday, it only makes sense that he'd at least look into staying at Tulsa if they'd have him.

Great article, Matt. Brett would be a great pick. You failed to mention his father, Larry, though, one of the greatest basketball coaches of all time!

They interviewed Hinson, who reported that Ballard's Baker team was running "KU/Self plays, and even running it better than us (Hinson's team)"...by gawd, I'd like to see the University of KANSAS basketball team run Bill Self's stuff like they are supposed to! And play D like Bill Self coaches/wants it to be played. Best 5 start, come on! No favoritism to lackluster upperclassmen, please...