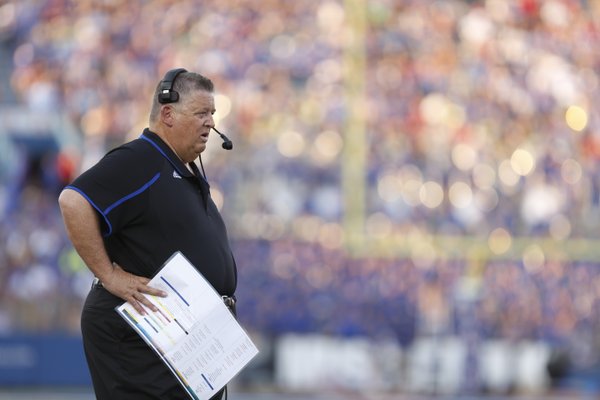 Kansas head coach Charlie Weis watches as a touchdown by Josh Ford is called back during the first quarter against South Dakota on Saturday, Sept. 7, 2013 at Memorial Stadium. by Nick Krug

As the season slipped by and his offense continued to encounter road blocks, Kansas University football coach Charlie Weis did everything he could think of to try to find a spark.

From changing personnel to tweaking schemes and everything in between, Weis spent countless hours — often late into the night on Saturdays following losses — trying to find a magic formula that would lead to more points and better efficiency.

While the second-year KU coach tried just about everything that crossed his mind before turning to true freshman quarterback Montell Cozart and watching the offense explode for 31 points in a victory over West Virginia last week, there also were a couple of things Weis didn't try.

Tuesday, he detailed one of them and explained why.

“I was thinking about going up and calling the game from the press box,” Weis said of calling the offensive plays from the bird's eye view enjoyed by most offensive coordinators. “Because every week I've been trying to figure out what can I do different to try to get the offense going. And I thought long and hard about it. But the real reason I didn't go up there was because I thought that people would say I'm just bringing attention to myself.”

As you surely know by now, Weis is one of those guys who attracts attention from all corners of the country for even the smallest things. It's been that way since he was the head coach at Notre Dame and even was true to a smaller extent while he was coordinating in the NFL prior to leading the Irish.

Contrary to popular belief, Weis does not prefer it this way. He'd rather the focus be on his players and his program and the young men who work their butts off because he tells them it will work. But because of his big personality, his honest nature and the spotlight that some of his previous jobs have put him under, Weis is a popular attraction, even at Kansas and even while battling through a hefty rebuilding project.

Earlier this season, I asked Weis if he had considered calling plays from the coaches box upstairs. The reason I asked was because I remembered him talking fondly about how much easier the job of an offensive coordinator was up there, away from the distractions of the sideline and in a setting controlled by you and only you, which included every detail from the temperature in the booth to the amount of light shining down and the bodies around you.

In addition to the more favorable environment, it's obvious that it's easier to see what opposing defenses are doing from high above the field as opposed to down the line of scrimmage.

At the time, Weis said the fact that his offense included so many new and inexperienced players was the reason for staying on the sideline.

“That's when you need to be on the field,” he said. “The time when it's easier to call the game from upstairs is when you have a more veteran team. You know, because now you're just relaying information to them. When there's a lot of moving parts, that's where you're better off being on the field.”

Weis continued to back up his point with an example from his days with the New England Patriots.

“Hey look, I was in the box for a good portion of my career and (New England quarterback Drew) Bledsoe got hurt, and (back up) Tommy (Brady) had to go in,” Weis said. “He wasn't really ready to go yet and I went down there (to the sideline). At the end of the year, we ended up winning it all, and (Patriots coach Bill) Belichick said you're staying on the field. There's different pros of being on the field now, but one of them is we have a bunch of guys going in and out (and) you get a better feel for what you can do and what you can't do.”

The other element that factors into the equation now that he's the head coach at Kansas is the fact that he's more than just the offensive coordinator. Instead of solely focusing in on calling the plays every other series and looking for ways to exploit the opposing defense, Weis is in charge of several other tasks on game days, from conversing with officials and disciplining his players to looking into the eyes of his quarterback and assistant coaches to get a feel for what's going on and who's capable of what. Weis likes that part of it as much as anything and, beyond that, he doesn't want to do anything out of the ordinary that might give the appearance that he's trying to do it just to be different or just for attention.

And it looks like that's where he'll be staying.

"But the real reason I didn't go up there was because I thought that people would say I'm just bringing attention to myself."

A couple things here. Weis didn't move up to the pressbox because he was afraid it would attract attention to himself. What I don't like about that is, he's thinking about how the public will perceive him, rather than just doing whatever he sees as best for the team. And honestly, I don't see how sitting in the box would be perceived as "bringing attention" to himself.

This is all solved if he hires an OC. Hire a guy this offseason, preferably a guy Weis knows well and trusts, and spend the spring getting on the same page with the new guy. Considering how crappy our offense is, it seems illogical to have the guy calling plays also involved in so many other aspects of the game. The offense needs one guy dedicating 100% of his effort towards it.

We've seen Weis swallow a lot of his pride this year and try new things. Hopefully he'll swallow what's left of it and get a good OC in for next year.

I agree Brett, I really hope that Charlie continues to hit the JUCOs for players. We need immediate impact players.

I like that he was able to install major elements of the Baylor offense in just a few days, and our kids were able to execute. Talk about a scheme change overnight! But spreading the offense all the way across the field opened up HUGE holes for Sims. Weis just showed us why Baylor is so successful with our cheap imitation of what they do. Imagine if we work on this for a few weeks straight.

Personally, I think many KU fans have Weis under a microscope, while actually we need to sit back and judge a block of games, or a season full of games. We are talking about moving the experience-bar for several newbies, and that doesnt get to the "next level" after 1 or 2 games. Self says to judge the basketball season in 10 game blocks (non conf, conf play, and post season tourney play).

The staff did an exceptional job of getting these plays ready for a schematic change and this is not an easy thing to do when you only have a few days to implement. Credit goes to both the players and coaches.

Hopefully we win these last 2 games.