For just the second time in our teacher vs. pupil challenge, we saw a perfect week during Week 7. And for the second time that prediction perfection belonged to Tom Keegan.

I know. Troubling. And I'm pretty sure that does not just go for me, it's probably true for the dozens of people on our plane down to Austin, Texas, who Tom told about his big week, too.

Oh well. Perfect is pretty so we'll give the guy all the time he wants to enjoy it.

After a rough Week 6, we both enjoyed bounce-back weeks in Week 7, but Keegan's zero-miss effort moved him into a two-game lead. With only one game different this week — Keegan picked Michigan State and I picked Michigan — Tom is guaranteed to hang onto that lead for at least another week.

At this point, I'm just hoping he doesn't add to it.

Here's a look at the rest of this week's picks, including similar scores in a Texas victory over Kansas.

Question: Now that the weather is starting to turn cooler and more resemble "football weather" what's your best weather-related football memory, be it as a participant, fan, reporter, whatever?

Answer: Although I have covered a bunch of great games in cold weather and been to plenty as a fan, the answer to this question is easy. The year was 1995, the fall of my senior year of high school, and with Lawrence High en route to another state football championship, one of the only major hurdles that remained was powerful Olathe North. North already had beaten LHS earlier in the season and had started to lay the groundwork for its incredible run of state titles that followed years of Lawrence High dominance. Now would be a good time to point out that I didn't play football in high school, but on this night I did. In the snow. While wearing shorts. Without using an actual ball. Stone sober, too. Anyway, hours before my buddies who were on the team showed up and knocked off the Eagles 32-7, me and those of us who weren't playing showed up for a little game of fake football on the snow-covered Haskell Stadium turf. We ran plays, made blocks, called penalties and even ran a dive play from the 1 yard line to win the game, which lasted so long that the O-North players actually waited for us to finish before they took the field for warm-ups. The shorts were worn (by a few of us) in honor of LHS assistant coach Jerry Skakal, who always wore shorts no matter what the weather conditions brought. The fake game was played because we were too young to know any better and plenty dumb enough to go through with it. What a good time, though. Thank goodness we won.

Answer: Since nobody wants to hear about me wearing a No. 5 jersey in my back yard, scrambling in the snow, avoiding would-be two-hand-touchers, keeping my eyes downfield the entire time, extending the play so that one of my two super-fast brothers (six boys, four girls in my family) could spring open, and then putting it right over his shoulder and softly into his hands, a good 10, 12 yards from where I threw it and watching him go …. all …. the …. way, I won't bore anybody with that story. So, my favorite weather-related memory has the snow falling at Arrowhead Stadium. Todd Reesing, looking like a certain No. 5 from a certain back yard some 40 years earlier, side-steps pressure and long after the play had broken, Kerry Meier breaks open, Reesing lofts a perfect touch pass to him and as Bob Davis put it, "TOUCHDOWN! TOUCHDOWN! TOUCHDOWN!" The No. 5 jersey worn in Rochester, N.Y. had Notre Dame on it back when Terry Hanratty was the quarterback. Reesing's said Kansas. Other than that, only the sharpest of football eyes would be able to differentiate the quarterbacks.

Runner-up: The year was 1970, the Los Angeles rain turned the field into a mess and Joe Theismann, trying to rally heavily favored and undefeated Notre Dame to victory, threw for 526 yards. But eight turnovers — four interceptions and four fumbles — undermined the Fighting Irish, who lost to the Trojans, 38-28. Fortunately, given the conditions, I watched this one from the comfort of the tiny den where we used to cramp as many as 10 people to watch games. Monte the Milkman sometimes joined us and occasionally ate one of our dog's milkbones, just to watch our jaws drop. But I digress. What was the question again? 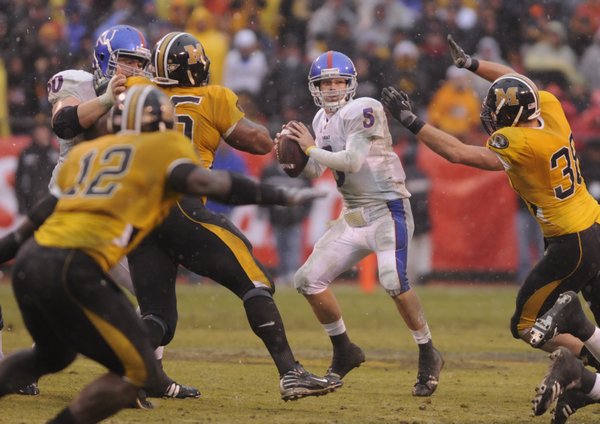 Kansas quarterback Todd Reesing looks to pass through the Missouri defense during the fourth quarter Saturday, Nov. 29, 2008 at Arrowhead Stadium. by Nick Krug

If you restart the clock to get back to the Reesing days then do you have to go through these last 4 years once more?

What a great question. I guess it comes down to do you believe in selling your soul to the devil for short-term pleasure. The right answer is no. The human answer?