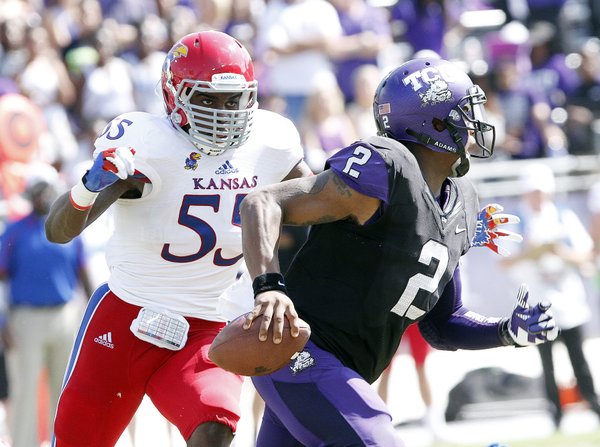 When it became clear during the offseason that junior-college transfer Chris Martin would not be around this fall to intimidate offenses, wreak havoc off the edge of the defensive line and give the Kansas University football team its first true pass rushing threat with double-digit sack potential, the focus shifted to fellow juco transfer Andrew Bolton.

No one really talked about Michael Reynolds.

And maybe that was a good thing. See, for years, we've talked about Reynolds as a natural pass rusher and called him one of the Jayhawks with the most potential, but during his first three seasons in Lawrence — the Wichita native red-shirted in 2010 — he didn't show much more than potential.

That isn't the case any more. With Martin gone and Bolton red-shirting while overcoming an injury, Reynolds has stepped into an important role for the Kansas defense and currently finds himself leading the team in sacks with 5.5.

The number is not one that will set the college football world on fire, but it's significant around here. And it's significant for a couple of reasons. For one, Kansas, as a team, managed just 12 sacks all of 2012. For two, it validates all of that talk about Reynolds being the kind of guy who could make a difference for a defense.

The pass-rush specialist did just that during KU's 42-6 loss at Oklahoma State last Saturday. His effort did not do much to keep KU in the game, but it did allow a pretty solid season to keep rolling. And it's indicative of what this whole defense is about right now — great effort, legitimate improvement, not much to show for it.

Reynolds' sack of OSU quarterback Clint Chelf in the third quarter gave him a sack in four of KU's past five games. During the rest of the game, Reynolds added another tackle, recorded a career-high two pass break-ups and consistently got close enough to Chelf to make him get rid of the ball just a tick earlier than he probably would have liked. That was reflected in his 19-of-37 passing numbers, which included several balls thrown prematurely that either missed the mark or were dropped by wide receivers not quite ready for them.

Like Ben Heeney finishing third in the Big 12 in tackles in 2012, Reynolds' strong season likely will be overlooked, perhaps even forgotten, because of all of the losing. And there's no doubt that Reynolds and the rest of the guys in that KU locker room would trade any and all of their individual statistics for a couple more tallies in the win column.

Until those start to come, though, efforts like the most recent one from the emerging Reynolds are all the Jayhawks have to celebrate.

Three games left to change that.

Charley, time is running out to just show some improvement, anything will do. Does someone have Mangino's cell number?

I see your Kansas State University Wildcats did quite well against Texas Tech!

Reynolds 5.5 sacks are good enough right now to put him fourth in the conference, and he does have the distinct disadvantage of not playing against Kansas. The Jayhawks are at 16 sacks total, the highest since 2009's 30, so I guess there's one category that has improved.

I agree that losing often trumps a lot of defensive statistics. I'm sure Jeremiah George and Jacques Washington would agree as well. Those two Cyclones are one and two in the conference with 102 and 85 tackles. Heeney dropped after missing those games, but he still is averaging nine a game. Just wish he didn't get so many opportunities!

This is another example of how the cupboard was not as bare as some of Charlie Weis's apologists would you to think. Reynolds was part of Turner Gill's only class he was able to recruit 'full time'. Reynolds, along with Heeney (part of the same class) have turned out to be very good defenders. Clearly on the defensive side of the ball, the coaching staff has done a good job of improving the defense. Granted, I think, the Big 12 is weaker this year, so it is hard to compare raw statistics, but the eye test says that the defense is better.

While I think Turner Gill was over his head as KU football coach, he did recruit some good players. I always thought that Weis would put together an offense that would get into shoot-outs with some teams, but, of course, that hasn't happened which is a huge disappointment.

I am sure that Art Briles, or Kliff Kingsbury, or Mike Gundy or Bob Stoops or Bill Snyder could take our current offensive talent and be much more competitive.

How about this: Gill didnt know what to do with the talent he did sign, either schematically or player developmentally, or in managing academics/off field issues...While Weis has had problems adjusting his offense ideas and experience to the college level, of course hampered by poor quality at several positions (WR, Oline), and steep learning curve/bad execution. It could be that only 4-5 star talent, that is also upperclassmen-physically developed and experienced in his "pro-style" system will be able to execute it effectively and efficiently. We have seen NFL teams struggle with their own pro-style offenses, so nothing is guaranteed. I do know that next season is a make/break year for Weis. Cox, Harwell, Short, Bolton, and 5 frosh Olinemen beefing and learning right now...I know this year sucks (!!), as we had higher hopes. Injuries to Pierson + Heeney + Faifili havent helped either...

We are running college offenses now, but without much lineup continuity--so we are still struggling. Also, lets face it: go-to players like Pierson have to make plays, or we got nuthin', and Pierson let a long bomb go right thru his breadbasket on the opponents goal line...Gotta catch those, or it matters little what the Oline, QB, entire defense does. Cant win if you cant score.

Good assessment. My contention all along is that KU has made two bad head football coaching hires in a row. I would have much rather gotten a hot assistant who brings in freshmen who will be here for 4-5 years and start to build something. Instead Weis brings in transfers including two 5 star QBs implying he is going to be competitive right away. It hasn't happened and next year most of the JUCO class will be gone (some have redshirted) and recruiting so far for 2014 looks pretty anemic.

Where is Darrian Miller???? Injured??? I haven't heard a peep out of him.

From the cliff's notes of Weis's press conference today:

"Running back Darrian Miller has some personal issues he has to deal with that are more important than football. When they get resolved, he’ll be back. He is not in trouble with school or with the football team."