What caught my eye at Tuesday's practice: April 2 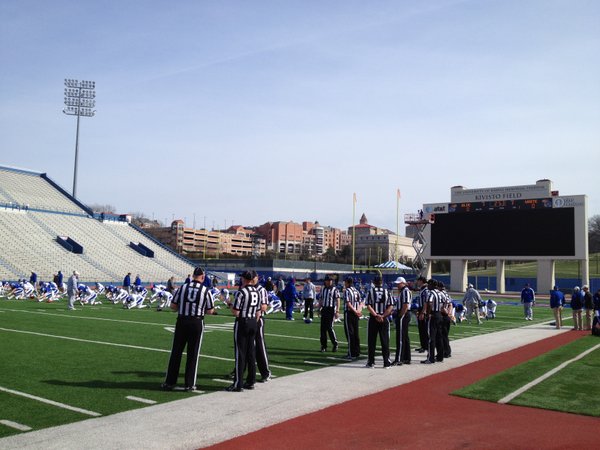 Tuesday's KU football practice was open to the media for the first time this spring. by Matt Tait

Tuesday marked the first practice of the spring that was open to the media and instead of the usual 20 minutes of stretching and warm-ups, KU coach Charlie Weis opened the door and pulled back the curtain for the entire hour-and-40-minute session.

A good chunk near the end was spent on special teams, but, with this team, even that was an area worth watching.

With that in mind, here's the first (and maybe only) edition of “What Caught My Eye” from spring drills. Grab a chair and get comfortable.

• New year, new leaders. In addition to the bounce in their step and hope in the air (none of that was there during the final few weeks of the 2012 season), it's always interesting to see what a new team looks like during spring drills. Who steps up and leads. Who is most vocal? Who leads by example? All of that and more is easy to spot during an open practice. But the easiest way to find out who the leaders are is to watch the stretching lines. Usually the guys closest to coach Holsopple are the biggest leaders and, on Tuesday at least, that seemed to hold true. The first line included quarterback Jake Heaps, linebacker Ben Heeney and running back James Sims. A couple of surprises on the first line included Keba Agostinho, Randall Dent, Dexter Linton, Jacorey Shepherd and Ron Doherty. A few of those guys are seniors, but a few are not. Nothing earth-shattering there but it was the first thing that jumped out.

• The Coach Weis song of the day seems to be back, at least for now, and today, the practice DJ stacked a Bruce Springsteen song on top of a Bon Jovi song. Talk about buttering up the head coach.

• Darius Willis, who now wears No. 52, looks substantially bigger than I ever remember him being. Willis, whom Weis said recently is pushing Heeney for first-string reps at middle linebacker, looks mobile, physical and ready for a bigger role again. In short, he's everything I thought he would be when he first arrived from Buffalo.

• One of my favorite drills of the day was a drill in which five receivers ran different routes on the same play, with each one receiving a ball at the same moment. The drill was made possible by the fact that all three KU quarterbacks — Heaps, Michael Cummings and Blake Jablonski — along with QB coach Ron Powlus and one of the managers dropped back and threw to a designated guy. While this unfolded for nearly 10 minutes, Coach Weis sat in a golf cart in the end zone and coached both the receivers and the quarterbacks. The way the receivers and running backs ran routes at different depths reminded me of the fountains at the Belagio in Las Vegas dancing to the music.

• Speaking of routes, I thought it was very cool to see the different ways Tony Pierson was used. I don't think for a second that we saw even one-fifth of what KU will ask of Pierson this season, but what we did see was the dynamic junior speed back running routes all over the field. Short. Long. Seam. Post. Corner. If he and Heaps can develop some chemistry, he'll be a nightmare for opposing defenses this fall. 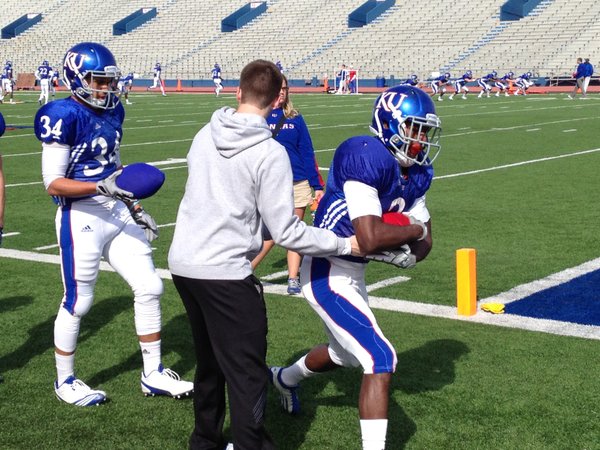 • Another dude we've heard about who truly has gotten bigger is red-shirt freshman tight end Jordan Smith. The guy's lower body looks like a tank. Didn't watch him a ton in route-running and pass-catching drills, but he's bulked up, no question about it.

• We didn't get to see much of the offensive or defensive lines during live action, so I'll stick with the linebackers and secondary. The first string looked like this: Courtney Arnick, Heeney and Jake Love at linebacker, with Shepherd and Cassius Sendish at corner and Greg Allen and Dexter Linton at safety. When the team went to its nickel package, Dexter McDonald checked in at nickel back. When they went dime, Allen, Linton, Shepherd, McDonald, Sendish, Tevin Shaw, Willis and Heeney were all out there.

• Remember that talk of accountability that we heard from these guys at the start of spring drills? It's legit. I heard more guys calling out other guys today than I can remember all year last year. Nothing major and nothing nasty. Just guys yelling at other guys after a dropped pass or for jogging instead of sprinting. No bad blood, no whining, just players responding to a little push from another teammate. Pretty cool to see, really.

• One of the most exciting sessions of the day was the one-on-ones, where wideouts or running backs lined up against a defensive backs and ran routes. Overall, the offense seemed to get the better of the defense during this one. By my count, the offensive player got the best of the defense 19 out of 31 times. That included nine of the first 10, though, so the DBs made a decent comeback late in the drill.

• Got my first look at new defensive backs coach Scott Vestal in action. He's intense. The guy really has a motor and he has a set of lungs to match. Really like his style and passion.

• We saw some pretty extensive special teams work and, of all the return men, Tre' Parmalee and JaCorey Shepherd stood out as the most impressive. Both had multiple long returns and looked incredibly shifty no matter where they were on the field.

• Speaking of special teams, it was cool to see the punting and kickoff drills because that gave us a good look at new kicker Trevor Pardula. I know it was just one practice, but I'd be shocked if Pardula didn't have both jobs locked up already. He's solid and consistent on kickoffs — something that even teammates paid attention to and responded with, 'We need that,' — and he can really boom his punts. On a couple of occasions, Pardula's punts inspired Weis to say the following: “Woo Hoo Hoo Hoo.” Huge upgrade.

• As for field goal kicking, it appears there's still some work to be done there. Pardula was decent and veteran Ron Doherty had his moments, but nobody stood out the way Pardula did in the other aspects of the kicking game. That's not all bad news. Remember, Hutch Juco walk-on Michael Mesh is still coming this summer and he should have a good shot of winning the job.

• Pardula did deliver when it counted, connecting on a 38 yarder to close practice. Had he missed it, the team would have run. Instead, they celebrated. Want another sign of progress? Last year, this was the drill that Weis had his team do over again because it didn't celebrate the made kick properly. No such problem Tuesday.

Love the thought of integrating Tony into the GP that much more. Would be great to have him on the field with Sims, and creating lots of wrinkles as a result.

The FG's are the part of the ST that I was/am most about, though nice to know that everything seems to be an upgrade so far.

Our running back stable has to be one of the best in the league. Taylor Cox was excellent last year subbing for Pierson and Sims and the freshman from Dallas seems to be showing flashes of explosiveness.

I'm getting excited about waving the wheat more than a few times per game this year!

Matt, any idea what the deal is with the different colored footballs?

That is an interesting question. They are doing hand off drills, the blue and red look like sleeves to me, so my guess is that it makes the ball slicker or harder to handle which makes the running backs stronger with the ball. Like a doughnut on a bat in baseball.

The Belagio Drill. I've only seen that a few times though being able to watch it for 10 minutes sounds great while hearing Weis coach 'em up.

"Grab a chair and get comfortable." — made me smile. Love this stuff!