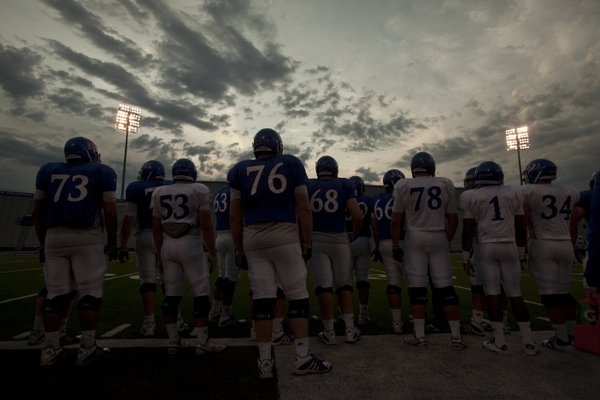 The media’s picks for preseason all-Big 12 honors were released today, and, probably to no one’s surprise, the first-team lists did not include any Jayhawks.

During the past couple of weeks, I thought long and hard about KU’s chances of getting a player on the first team. Each time, I concluded that it was not likely.

Not only are the Jayhawks devoid of top-tier talent — especially when comparing them to the rest of the Big 12 rosters — but they’re also coming off of two of the worst years in school and league history, something that surely that has stuck with the rest of the media members who cover the league.

There are guys who belong in the conversation. Offensive lineman Tanner Hawkinson is a legit talent with an NFL future who has carved out a nice career, but it’s not surprising that he was not named a first-teamer. I would say Hawkinson, who once again will hold down his familiar spot at left tackle during his senior season, had a better shot of being a first-teamer on the postseason awards than he did the preseason lists.

Another guy who constantly crosses my mind when it comes to these types of lists is senior wide receiver and kick returner D.J. Beshears. Last year, I included Beshears on my preseason ballot but KU’s special teams as a whole — including Beshears — were a disaster last season and he did not sniff a mention on the postseason squad.

While I like all of those guys and think they are among KU’s best players, I don’t think they’ve proven that they belong on this list just yet. Opurum and McDougald are still relatively new to defense and their numbers have not necessarily made them stand out in the minds of people outside of Lawrence.

As for Beshears, he may have another stellar year in the return game like he did as a sophomore, but, even at that, it’s hard to justify putting him ahead of Kansas State’s Tyler Lockett on this list.

Today’s news might have come as a disappointment for some KU fans, but it should not have come as a surprsie. Based on what we know about KU’s roster and how certain players stack up against the league’s top players at each position, it seems more than fair to leave the Jayhawks off of this list and make them earn their way onto the postseason squad. Whether any will or not remains to be seen.

For the record, neither Tom Keegan, Jesse Newell or myself included a single KU player on our ballots.

Here’s a look at the media's picks for the preseason all-Big 12 first-team offense and defense:

That doesn't make any sense. Were the voters aware that the players' names will be on the jerseys this year? As I understand things from reading comments here, that was the biggest reason that the team struggled the last two years.

It wasn't the names, it was taking the red stripe off the helmet, and I don't think those are coming back.

Matt, what about Duane Zlatnik? How does he stack up in your opinion?

He could be KU's best pro prospect on the offensive line and he seems to be in line for a huge year... However, he's still a relatively unknown name around the league and, therefore, won't get a lot of love on these types of lists.

Matt, these are totally understandable preseason results, and I would think that Weis is very happy with them. Despite that assessment, it still qualifies as Major bulletin board material for the guys. Exceed Expectations!

Interesting point. Seems as if you're starting to catch on to Charlie Weis' way of thinking!

I'm sorry I still do not see Toben as anything more than an average defensive player. I have never caught on to the hype about him on the defensive side of the ball. Do his stats say differently? I hope he proves me wrong this year.

You're not alone. I don't think it's his stats, but maybe his potential, that have caused some to talk about him in this manner. Of course, he's only got one year left to prove it, so we'll see what happens.

IMO, It's because he hasn't played the same position two years in a row yet. He's a fullback. No, he's a linebacker. No wait, he's a pass rushing LB/DE hybrid. This will be the first year he comes in being able to use his past experience to build on. And his body has been steadily filling the mold too. Can't wait to see him this year!

I get the rankings, and I am disappointed about being the only Big XII team left out, but it shows how low our program is and why there need to be a change.

I'm all for giving WV some credit, but I'm not sold on their QB coming from such a weak conference.

As much as the offenses are high flying in the Big XII they also have some good defenses. I think there are a few bigger names in the Big XII as it goes for QBs and the newcomer shouldn't be at the top right now.

I hear what you're saying, but have you watched this guy much? He's crazy good and should have a fantastic year. It would be interesting to see how the voting went at that position. With Collin Klein and Landry Jones both in the conference still, I gotta think things were spread out a little bit.

I thought he was on the Timex watch list.

Probably, but well below Geno Smith and Landry Jones.

December teams are all that matters.

"While I like all of those guys and think they are among KU’s best players at their positions...."

Yes, the starting punter could possibly be the best punter on this year's roster!

Who cares about pre-season, it is all about post-season!!!

At least we were not the only team to not be represented on the 1st or 2nd team. Only 9 teams got players on the team so at least KU and 2 other members of the Big 12 got shut out.

Maybe you're just kidding. BUT ... do you know how many teams are in the Big XII?

What about all of Kus corners? they were so good last yeat

Matt, I am probably in no man's territory on this, but I think Kansas has a decent shot at 6-6 this season.

All signs would say otherwise, but if Charlie can just get the Hawks to play with few turnovers, hold down the big plays and push the time of possession up, I think we can sneak up on some people based on the results of the last three seasons.

You know much better than me, but I just feel it's more fun to go into a season with hopes of real improvement, while still maintaining realistic expectations in the back of my mind.

I would put the over/under for KU wins at 4.5 with the key game being at NIU. If they win that, I think they could win 5 games (2 conference games). If they lose, they will be fortunate to win four games.

I hope people realize the scheduling advantage that Mangino had do not exist today. The conference is tough. There are no years where you can avoid playing OU or UT, and not having four non-conference games makes it much more difficult to become bowl eligible.

Any idea what Vegas has as the over/under for KU wins? I would be curious to see if they are as high as 4.5. Optimistically, I hope for 6; realistically, I think 5.

KU football is horrible! KSU will win again! Turner Gill was the best thing you had going for you .... maybe if KU could get "good" people to play football there they wouldn't need a 9pm curfew .... horrible outlook for years to come ....Pleeeeeeee

guess we shouldnt even play k-state for the next decade....Weis will make synder retire within 3-5 years once the power swings back to the east side of the state. why is brown eligible? shouldnt all miami players be suspended till they say otherwise, guess im use to the NCAA hating on us.

When u are bad u bad .... KU might as well quit their football program and play sissy basketball all year ....

KSU: Where the women are men and the sheep are nervous.

... one would think that a school, like K-Straight, with such a great football program would have its own blog.

Here's a quick break-down of KU's opponents schedules & how to get to 6 wins:

TCU: Possible national audience. TCU will be on the road for their 2nd game of the season after opening the previous week with a "practice" vs Grambling. KU will be in their 3rd game and at home. Weis should be ready!!

@ K-State: Both teams coming off of a bye-week. In Manhattan. Coach Weis has stuck his neck out regarding 1 team in Kansas winning 10 games and not the other. Showdown!!

If we win @ West Virginia, Weis will be Coach of the Year. Love the enthusiasm though!