What caught my eye at Day 4 of Fall Practice 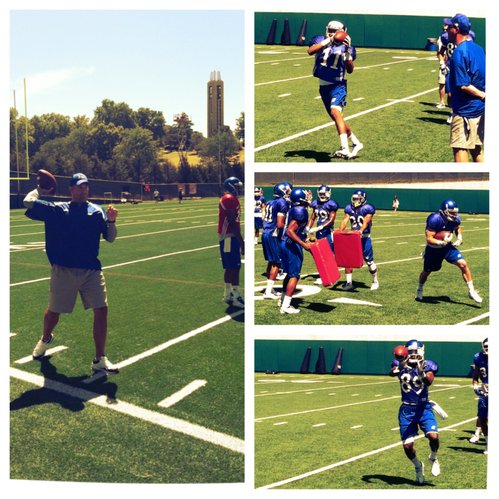 Sunday was the second day of practice in shoulder pads for the Kansas University football team and, with it, came a little different look at this year’s squad.

I’ve heard from football coaches for years that guys who look great in shorts and helmets don’t always necessarily transfer that over when they’re suited up in pads. Although we won’t see full pads until Monday — because of NCAA practice rules — we can tell a little something by looking at them with shoulder pads on.

So that was the theme of what I tried to keep an eye on today — especially with the newcomers. Obviously, we’ve all seen what Daymond Patterson, D.J. Beshears and Tony Pierson can do in pads. But what about some of the new guys, both on offense and defense?

Here’s what I saw:

• Freshman cornerback Greg Allen looks like he could be a beast. For starters, he’s incredibly athletic, but he also has great size. At 5-11, 204, that should be big enough to compete with most receivers in the Big 12 right away. Especially at cornerback. Putting on shoulder pads only made his frame stand out more.

• Same story for freshman safety Tevin Shaw. Both of these guys have great size for true freshmen. And several of the coaches already have talked about how they are physically ready to compete. You figured they would have to be to land on the depth chart before even putting on a uniform.

• Another newcomer who looked good in pads was freshman wide receiver Tre Parmalee. His name came up earlier in the day when wide receivers coach Rob Ianello talked with the media about his group and Parmalee, who was the top receiver in the Kansas City area last season at Bishop Miege, looks every bit as athletic and quick in shoulder pads as he does without. That position is so deep and there is so much competition there that it’s hard to tell if Parmalee can crack the lineup right away. If he doesn’t, though, it won’t be because he’s not ready.

• Speaking of receivers, I mentioned Saturday that D.J. Beshears was riding the bike at the beginning of practice. He jumped into things full speed on Sunday and looked fine.

• As I stationed myself between the DBs and WRs for most of today’s session, I noticed something that I thought was pretty cool. We all know that these two groups like to talk trash on one another when they’re battling it out, but did you know that it extends to drills, too? Shortly after senior safety Bradley McDougald finished an interception drill on the south end of the fields, he shouted toward the receivers on his way back to the safeties line. It’s possible that his words could have been those of encouragement, but the tone with which they were said and the history between the two positions suggest that McDougald was trying to light a fire under his team’s wideouts.

• Finally, another quick note on the music that kicks off each practice. Other than remaining as loud as can be, I learned a little something about the order of the songs that are played. At every practice the second song of the day belongs to head coach Charlie Weis. He doesn’t necessarily pick it, but the crew that is in charge of the music knows his favorites and they make sure to sprinkle one in early in the day. Based on the first four days of practice, it appears that Weis’ top two favorites are Bon Jovi and Bruce Springsteen. Big surprise, right? Sunday’s tune: Bon Jovi’s “Bad Medicine.” Good stuff.

• One more quick music note: I was particularly entertained when senior tight end Mike Ragone did his best American Idol audition to the Jay-Z and Kayne West song that we'll just call, "Ball So Hard."

• Finally, I should pass along this statement from Charlie Weis regarding the passing of Garrett Reid, the son of Philadelphia Eagles head coach Andy Reid:

“I just heard the tragic news of the passing of Garrett Reid. Andy has been a close friend of mine for many years and my thoughts and prayers go out to Andy, Tammy and the kids.” 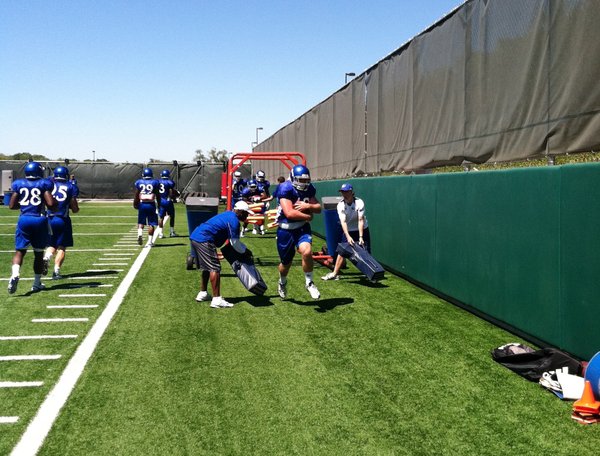 KU's running backs run the gauntlet during the opening portion of Sunday's practice. by Matt Tait

Love an update in the afternoon! Great work!

Great stuff as always Matt, and these pics. . . .better be careful Nick doesn't think your stepping on his toes. LOL Thanks for the updates.

Love the updates. Like to see our defensive unit really stand out and surprise some teams. That would make my day if that happens!

I know what McDougald told the receivers...

"YOU HAVE BEEN McDOUGALD"

Thanks. Figured that was safe!

Why would Matt say that a CB would dominate a CB? Hint - he didn't.

He did say that Allen (a CB) would COMPETE with WR, especially as a CB (vs. a S where he would be on the shorter and lighter side). A 204 lb CB is good sized.