What caught my eye at Day 1 of Fall Practice 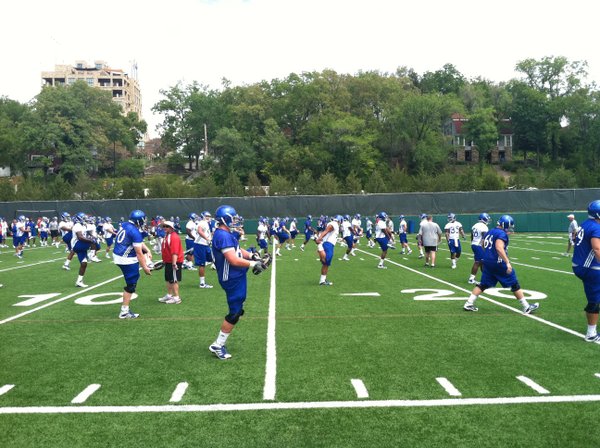 The first official of the 2012 season kicked off Thursday afternoon. by Matt Tait

It began with conditioning tests at 6 a.m. this morning and was followed by team and position meetings not long after.

But now, in the 100-plus degree heat on a sunny August afternoon, the 2012 Jayhawks are on the field.

The first official practice of the season began around 2:30 p.m. today, and will continue until the temperatures finally start to climb down.

As has been the case during the past few seasons, the media was invited out to the first 20 minutes of practice, and, although that’s not long enough to make solid conclusions about anything we see, it’s plenty long enough to snag a couple of first impressions.

• Juco offensive lineman Aslam Sterling was at practice, though not participating because he just arrived today. Didn’t matter. Seeing him out of pads gave me a chance to see just how big this guy is. He’s huge. In fact, at one point during the practice, KU coach Charlie Weis strolled my way and said, ‘Did I tell ya he was a big boy or what?’ He is. In terms of upper body, Sterling has the typical look of an offensive lineman Where he stands out, however, is closer to the ground. His legs are build like tree trunks, from the floor to his waist. This guy’s going to be a huge factor in the KU offense.

• It may seem silly, and maybe it’s a little unnecessary to point out, but even in the warm-up session, where the team does something between a sprint and a job for 10-20 yards, the players looked leaner and lighter on their feet. We’ve heard over and over that the offseason conditioning program went well, but I now can confirm it with my own eyes.

• Keep an eye on freshman offensive lineman Sean Connolly. He’s a big kid, but he’s way more athletic looking than I expected him to be. Impressive.

• As we mentioned during spring drills, the Jayhawks now begin their practices to music. Different mixes of rap and rock n’ roll fill the air and add to the envirnoment. But what we saw in the spring was like a cello concert compared to what was out there today. Somewhere along the line, a brand new — and rather enormous — sound system was placed on the practice fields and watching these guys go through warm-ups was like being at a live concert. I literally had to shout so the guy next to me could hear what I was saying.

• Short and sweet: Nebraska transfer Josh Williams looks like the real deal. He’s much taller than I expected and thick, too. He’ll be a force.

• The first string offense and defense were reflective of the depth chart that was released yesterday. No surprise there, but you never know, you know?

• Rookie safety Tevin Shaw looks pretty well put together, but he’s a little smaller than I expected. He kind of looks like KU running back Tony Pierson, except he has braids popping out of the back of his helmet. Makes sense considering Pierson is listed at 5-10.5, 170 and Shaw at 5-11, 185.

• Junior linebacker Huldon Tharp led most of the linebacker drills. Senior transfer Mike Ragone led most of the tight end drills. Speaking of linebackers, Schyler Miles looks like he belongs, Anthony McDonald looks exactly the way you would expect a fifth-year senior transfer from Notre Dame to look and freshman Courtney Arnick, who is known for his wheels, looks a little smaller than the rest and probably is a pretty safe red-shirt candidate.

I’ll be out there for the first 20 minutes of most of the next couple of weeks worth of practices, so keep an eye out for this feature in my blog.

"The first official practice of the 2011 Kansas football season kicked off Thursday afternoon. by Matt Tait"

Uhhhh, yep. No idea how that happened. Trying to post it too quickly, I guess. My bad. Thanks for the catch. It's fixed now.

I am trying to forget that the 2011 season ever happened as well.

Instead of correcting the year, can we just go back in time with this team and coaching staff and do-over the entire 2011 season of football?

Matt, dorky uniform question: From your picture it looks like the helmets are solid blue with nothing on them. Is that the case?

Didn't even notice, to be honest... but I'm guessing that won't be the case when the season rolls around. A lot of times the helmet decals and whatnot are put on later, and, sometimes, even every week.

Interesting stuff! Thanks to you both.

Thanks for the update. Question. How many players were out there today? No we know how many are on scholarship and how many walk-ons?

take advantage of the branding with one of the most recognizable mascots in all of sports. return the JAYHAWK to the helmet. RCJH

Someboy on here had an avatar that was a football helmet with a gian Jayhawk wrapped around it. I thought it was extremely cool!

I'm really excited about Aslam Sterling, especially after hearing a first hand report of how he's looking without pads.

I'm anxious to get Matt's impressions of the new Juco transfer running back, Cox. I've seen video clips and he looks like he may be pretty special. I wonder if he'll look that good against D1 guys?

Jordan Tavai's last JUCO class doesn't end until August 5 (JUCO's mess up, it was supposed to end on July 29th) and he's expected about August 8 to report for practice.

Matt, excellent work as usual. I enjoy getting to keep up with all the happenings from Montana. And I hate to be the pedant, but in your second impression I think "job" should be jog: "something between a sprint and a job for 10-20 yards."