Another look back at Thursday's early-morning KU football practice 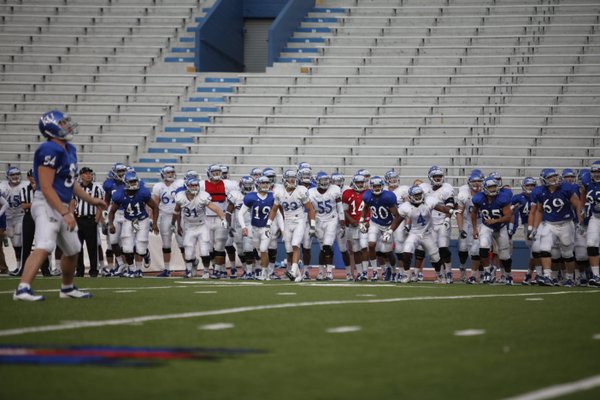 The Jayhawks rush the field as they watch a field goal from kicker Ron Doherty to end practice on Thursday, April 19, 2012 at Memorial Stadium. by Nick Krug

Yesterday, you were treated to an inside look at the way in which Kansas University football coach Charlie Weis conducts himself during a typical practice.

Weis was equal parts intense, funny and genuine and did not seem to hold anything back just because he let the media in for the entire on-the-field practice.

We spent a lot of time yesterday focusing on what Weis looked, sounded and acted like during Thursday’s early-morning practice, but we didn’t give you much of a look at the players themselves.

In order to fulfill the football fix aspect of our day at practice, here are a couple of things that stood out to me: 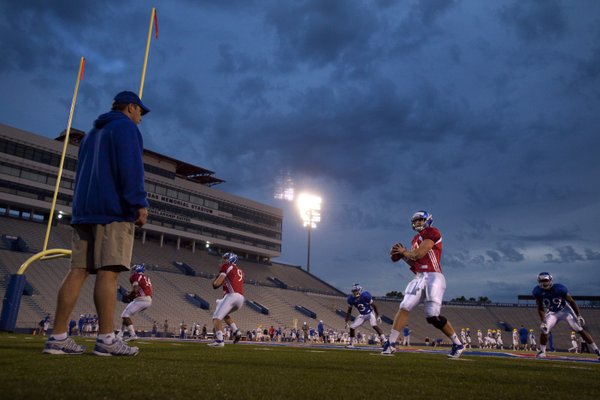 Dayne Crist, front right, and the quarterbacks work on handoff drills with running backs during a morning practice on Thursday, April 19, 2012 at Memorial Stadium. by Nick Krug

• Quarterbacks Dayne Crist and Jake Heaps might as well have been playing HORSE out there. It was just a small portion of Thursday’s practice and it was more of a showcase for the wide receivers and defensive backs, but still, Crist and Heaps stole at least some of the show. Both have such strong arms and such tall and powerful deliveries that it was a joy to watch them just flick the ball downfield for the receivers and DBs to make a play on it. Tom Keegan spent more time watching this than I did and he said that every deep ball that Crist threw was right on the money. That’s encouraging. What’s not is the number of those deep balls that were dropped. No need to worry too much there, though. For one thing, the wide receiver position is deep and there are plenty of guys who will be given a shot to step up. Two, there’s still plenty of time to practice and work on that stuff, including the entire summer, a time that’s known for helping QBs and pass catchers develop a connection.

• This coaching staff is not messing around with special teams. Clint Bowen is a great special teams coordinator — he had offers to coach that unit in the NFL but turned them down — and he takes a lot of pride in making sure all of the special teams are well drilled and mistake-free. You could see that in the way the entire coaching staff rode the players during special teams drills on Thursday. They expect this to be an area where KU has an advantage every game. What’s more, it looks like they’ll be more than comfortable using first-string guys from the offense and the defense to play key roles on special teams if needed.

• It really is a thing of beauty to watch Tim Grunhard coach the offensive line. There’s just something about a guy that big who played that position at such a high level teaching these young guys how to do it. Very little of what I saw from Grunhard on Thursday was technical stuff — though we have seen some of that during the early portion of other practices we’ve been to — but it was still cool to watch him stalking the linemen he coaches like a predator waiting to pounce on them if they make a mistake. And, in this case, a mistake could be something as simple as not getting your knees up high enough while warming up. Look, if Ringo Starr came up to me and said I was hitting the snare drum a little too hard, I’d probably pull back. Same kind of deal here. 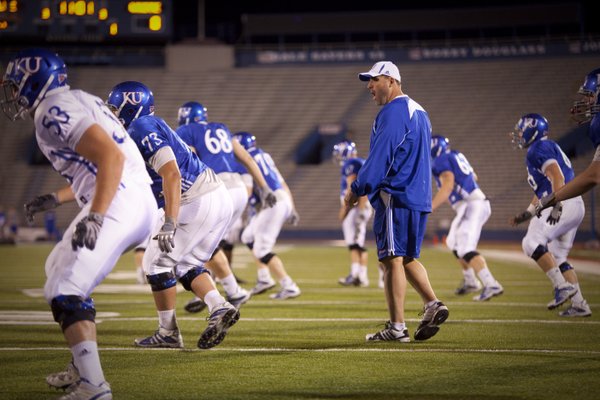 Offensive line coach Tim Grunhard works with his players during a morning practice on Thursday, April 19, 2012 at Memorial Stadium. by Nick Krug

• This coaching staff is not lacking for energy, but Dave Campo and DeMontie Cross might be the two most energized coaches out there. Clint Bowen and Rob Ianello are right behind them, but it’s tough to beat Campo’s pep and Cross’ bounce.

• The kicking game needs work. Both place kickers, Alex Mueller and Ron Doherty, struggled to make mid-range kicks with very little rush and next to no pressure. That’s not a huge surprise, as neither guy was able to prove he was the clear-cut man for the job last season, but you can bet that this will be an area Weis and company pay close attention to during the offseason. I don’t think they’re interested in giving points away.

• One other thing that stands out when watching this coaching staff in action? Brutal honesty. There were times, after guys did a drill wrong or missed an assignment, where the coaches just flat out said, “Hey, man, you won’t play if you do it like that.” And they’re not afraid to get after guys with some harsh language — as it should be; it’s football — but they don’t ever do it in a way that makes you feel like they’re trying to show anyone up. That’s a good thing in my opinion and can be the difference between guys wanting to bleed and sweat for you or wanting to tune you out. These coaches are hard on these guys but they’re hard on them because they want them to improve not because they enjoy being jerks.

We get one more look at this team on Tuesday (albeit a brief 20-minute look) and then it’s on to the spring game next Saturday.

In case you missed it, here’s the format for the spring game, which figures to be one of the most competitive — and most attended — spring games in years.

Really enjoyed the rundown, Matt. I say that even though I came her looking for a hint on when we will hear about McCay.

Good deal... No hints yet, man. Sorry. Just a lot of waiting.

Love the differentiation, Some posters seem to not be able to grasp the difference (between MM and now).

I don't think JaCorey Shepherd will have any trouble getting getting deep quickly, and Kale Pick is already really good at deep outs. Tony Pierson on a bubble screen sounds like a ton of fun.

Ragone only had like 11 catches in his entire ND career, so I'm not to sure he's the answer as a pass catching TE. At around 270 pounds he's a blocker all the way.

Mundine and a couple of these kids coming in the summer should fill a pretty important role for this offense in the passing sense. I even saw that they switched the big WR from Arkansas, 6'7" Neal Barlow, to TE. Barlow is one of two basketball playing TEs coming in.

ND69 - There is also the UWash (WSU?) game frm around the same time when they blocked a kick that was scooped by a DB-type that motored down the sideline. Again, Ragone ran him down from the opposite side of the field. There is also an article on ESPN about the depth that ND has at TE this year.

Definitely agree with the comment about Dayne having an established repor with him. Should be lots of plays!

Thanks, Matt, for the football column! Really enjoyed it.

"Look, if Ringo Starr came up to me and said I was hitting the snare drum a little too hard, I’d probably pull back. Same kind of deal here."

not sure if this is really the best analogy, unless matt is actually trying to say that grunhard was just an above average lineman. don't get me wrong, i love me some beatles, but ringo isn't exactly known as being the best drummer in the world. on-top-of-the-world famous, yes... best drummer, ummmmm no.

by the way, i should add that i really enjoyed the column as well... thanks, matt!

You could get banned for such comments. :-)

Ringo was not the flashiest drummer in the world, and, therefore, is not often regarded as one of the best.... But if you want a guy to hold down a groove for you (any groove, mind you) without having to worry for one second if he'll be able to stay on it then Ringo's your guy.

To each his own, I guess. I also hold the drummers you mentioned in high regard, along with John Densmore, Mitch Mitchell and Ginger Baker.

Glad you enjoyed the blog! Thanks for the comments and for checking it out.

Matt's right. Ringo, despite his persona as the silly Beatle, was known among drummers of the 60's and 70's as one of the best. His druming doesn't call attention to itself, the way Moon's did, but listen to the drumming on Sarg. Pepper. The dude can play.

How about the "Thunder God" Rick Allen (Def Leppard)...even more impressive since he uses only one arm.

Where can we find the footage of the Oklahoma drill ?

You are clearly positive about what you've been seeing with the staff (and some of the players). I hope that's "real" and not just the wishful thinking that we all go through with a new staff.

For two years I've been trying to put into words why some yelling from coaches is acceptable and some is not. Thank you, Matt, for expressing the difference so well. And thanks for the awesome football articles. We are so excited for the upcoming season!

Love that Charlie thinks we're going to win around here.