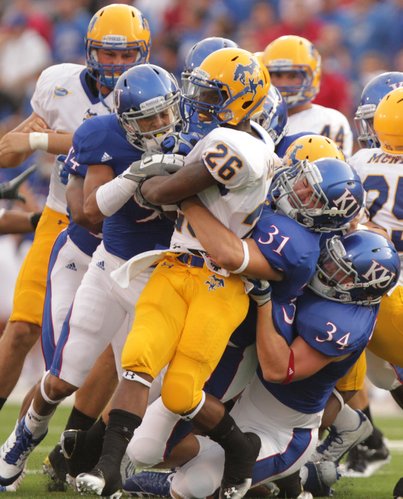 By now, you’ve heard all of the notable stats: 301 yards rushing, 55 attempts, five plays of 20 yards of more, three for TDs. Combine that with all of those exciting moments from the newcomers and it’s easy to see why opening night was a rousing success for the Kansas University offense last Saturday.

But a closer look at how the Jayhawks picked up the 42-24 victory over McNeese State reveals a couple of major differences in this year’s team compared to last year’s squad.

For starters, the Jayhawks played fast offensively. There was a lot of no-huddle, quick tempo throughout the game and KU coach Turner Gill said all offseason that he wanted his team to get in and out of plays faster than they did a year ago. Part of that has to do with getting the calls to the field. Another part has to do with comprehension and execution from the players. Both seemed to be wildly successful Saturday night, as the Jayhawks pushed the pace all night.

While Gill said he was pleased with the tempo, he also said he’d like to see his team play even faster in the coming weeks. Doing so, not only gives them a chance to develop a rhythm but also helps keep the defense off balance. Some might say that controlling the clock with the running game and playing fast are contradictory, but, in this case, playing fast has nothing to do with the time coming off the clock and everything to do with getting in and out of plays quickly, getting set at the line of scrimmage and giving the defense minimal or no time to adjust. If KU can master this, it will increase their chances of winning every game.

To nobody’s surprise, the running game dominated the offense Saturday night. Heck, even KU quarterback Jordan Webb had a decent night on the ground, rushing for 39 yards and a TD on eight carries.

James Sims finished with 100+ yards on 19 carries, freshman Darrian Miller added 63 yards on 13 carries and fellow freshman Tony Pierson picked up 73 yards and a TD on five carries. So where was red-shirt freshman Brandon Bourbon in all of this? Good question. While also playing on the kickoff return team, Bourbon tallied three carries and 19 yards. Remember, though, this was Bourbon’s first game, too, and this whole running back by committee thing is going to be an ongoing feeling out process.

All we learned from Saturday’s game about the way the coaching staff will handle the approach is that they’ll feed the hot hand and continue to rely on Sims.

“James Sims is our guy,” Gill said Sunday night. “And then after that, we’ll see how it goes. In this last ballgame, we had Miller in there a little more but we have different packages for different guys, Pierson and Bourbon. With it being Brandon’s first ballgame, we were just trying to get a feel for what he could do in a game. It just kind of worked out that way that he only got (three) carries but you never know how it’s gonna work out each ballgame.”

One other interesting note was that sophomore wide receiver Christian Matthews got an extended look in the Wildcat package, one that we’ve now learned Gill and company call “Jayhawk.”

Most of Matthews’ time in the Jayhawk package was spent handing off, but he did manage one carry for six yards on a nice read that he took up the middle.

“I thought he executed pretty good there,” Gill said. “We had a couple good runs out of it and took care of the football.”

Defensively, Week 1 was not quite as feel-good. The pass defense struggled all night and had particular trouble covering McNeese State’s screen passes. The run defense was solid and was led by the stellar play of Steven Johnson (15 tackles) and Toben Opurum (11 tackles).

Overall, the defense looked much faster and a little like the KU offense in that the KU D is full of playmakers. Opurum and juco transfer Tunde Bakare were active all night. The coaches also dialed up a lot more blitzes than we saw at any point last year.

As for the 3-4 look, KU really didn’t show it that much. Opurum spent a lot of the night in the defensive end position, with his hand on the ground and the interior lineman seemed to line up more in the gaps than in the spots reserved for the traditional 3-4. The guess here is that KU held a little back knowing that the games will get increasingly more difficult from here on out.

All in all, a pretty solid effort for an opener. Gill said the mistakes his team made on defense were all correctable and had to do with individual breakdowns and adjusting to new calls from a new defensive coordinator. As the games go on, those things will smooth out a little bit.

Offensive Player of the Game: Sophomore RB James Sims. I know there were more highlights from the newcomers, but Sims set the tone early with a 30-yard burst and then carried the load the rest of the way, finishing with 104 yards and a TD on 19 carries. Tony Pierson, Darrian Miller and JaCorey Shepherd were all sensational. But Sims was super consistent.

Defensive Player of the Game: Senior LB Steven Johnson. Hard to go with anyone else here, though Opurum certainly had a nice game and Tyler Patmon did some good things, as well. Johnson finished with a game-high 15 tackles and seemed to be closing in for at least a dozen more. He looked like the savvy veteran he is out there and played with great tenacity.

Special Teams Player of the Game: Freshman long snapper Tanner Gibas. I know the Jayhawks punted just twice, but Ron Doherty averaged 46 yards per kick. Give his leg a little of the credit for that. Give the rest to the snaps from Gibas. This was a major weakness last season and it appears, in one game, that Gibas has fixed it. Great start.

Stat of the Game: After going three-and-out on their first series of the season, KU scored touchdowns on its next three possessions, went into halftime with a comfortable lead and then scored a TD on its opening drive of the second half.

Up Next: KU will play host to Northern Illinois at 6 p.m. Saturday at Memorial Stadium.

Great article, Matt. I really enjoy the insight you bring. There is plenty of confusion among fans about running the ball, establishing a quick tempo, and taking time off the clock. You explained it very well with the primary focus of a quick tempo on not allowing the defense time to adjust. This also minimizes the defense's ability to make substitutions. You can only imagine trying to shuffle in 300 pound plus defense lineman in and out before we snap the ball. But of course we know when we are going to snap the ball so we can give our offensive lineman some rest if we let the play clock wind down to near zero.

Yes I agree. I played QB in high school for Holton and we ran the wishbone. We also ran no huddle. Just because you are a run-heavy team doesn't mean you have to go with a slow tempo. Holton has been very successful with this style and if you know anything about Kansas high school football you know that Holton is a contender for the a 4A state championship each year. I like the idea of Kansas being a no huddle run-heavy offense. I believe its going to work out very nicely for the Hawks.

Am I first? Ampersand must be spending Labor Day welcoming people at WalMart.

Love the speed and talent of the freshman skilled players and Sims. Just remember kids, the yellow brick road of college is littered with numerous examples of guys showing great potential in their first game only to lose interest in attending classes and football, spend too much time boozing and chasing skirts, or making too many late night runs to Taco Johns or any combination of the previously mentioned. How about taking a different path and create a Sayers, Hadl, or Riggins legacy?

The team was much more organized than last year. The only deer in the headlight moment was when we went to the Jayhawk formation for the first time after a timeout and got a delay of game penalty and then had to call timeout again, only to score on the next play. Go figure.

Defense looks like they are playing with 10 guys sometimes which means we’re out of position more than we should be.

HCTG plan to speed up the game with a run oriented offense is a great idea if you move the chains. Otherwise, your defense will spend way too much time on the field, which is not our strength.

Some Big 12/10/9/8 teams struggled in their opener so maybe our schedule isn’t as tough everyone was thinking. I’ll be happy if we are still in the game in the 4th quarter with a chance to win if we play smart.

Thank you also for clarifying the tempo from the standpoint of the ability of the coaches to get the plays into the huddle in a timely manner. There was one sequence where we called a TO (2?) because the play clock was winding down, which drew some (unwarranted IMO) criticism. If we are playing up tempo tho, there is not an overall concern with timely play calling.

Matt, Enjoy the Cliffsnotes version. Is there anything in the works regarding video highlights other than the previous posting?

Props to Steven Johnson. He's come a long way in his career, and should be congratulated for his efforts and hard work, which certainly paid off on the field Saturday evening.

The thing I like about Sims is his toughness and attitude. You can see it on the Ch. 6 highlights when he goes in for a short TD he just keeps plowing away at a defender even though he is already in the end zone. He is not going to give the defender the satisfaction of getting him on the ground. He is going to rip off some long ones too this year.

We'll need some noise to beat NIU this week, get out to the game.

Great article Matt... I'm anxious to see if the items with the defense are as correctable as Turner mentioned. There certainaly is more speed on that side of the ball.

I liked this article too. It helps to attach strategy to the stats we see. I was fascinated by how we seemed to spend 10 minutes less on offense than they did, and this helped explain it....thanks again Matt.