NBA Draft 2011: It's time for another trip to the Big Apple 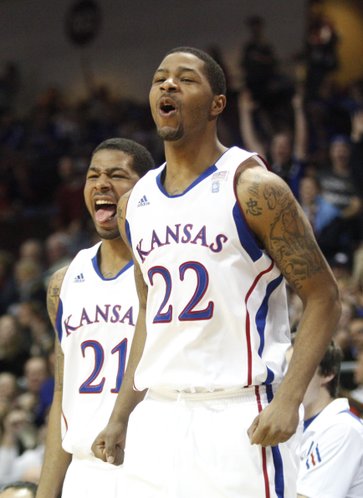 Kansas forwards Markieff Morris (21) and Marcus Morris (22) react to a dunk by teammate Elijah Johnson during the second half against Ohio, Friday, Nov. 26, 2010 at the Orleans Arena. by Nick Krug

A year ago, I traveled to New York City to cover the NBA Draft and watched as former Jayhawks Cole Aldrich and Xavier Henry became lottery picks.

Are we in for a repeat this year? I’ll do my part.

For the second year in a row, I’ll be making the trek to the Big Apple to follow the draft goings on of Marcus Morris, Markieff Morris and Josh Selby, the three former Kansas University players eligible for this year’s draft.

Whether two of those three — perhaps more? — will be tapped as lottery picks remains to be seen. But I’ll be on the ground every step of the way bringing you the latest updates, videos and photos from New York.

I’ll spend a good chunk of Wednesday following the twins as they bounce around the big city and prepare for the night that will change their lives. As I do, you can follow their progress by logging on to KUsports.com for updates throughout the day. You also can track what’s happening all week by following me on Twitter.

In addition to providing an up-close-and-personal look at what’s up with the former Jayhawks about to become pros, I’ll provide all kinds of other interesting updates — about all of this year’s draft class — from Draft headquarters in Times Square both Wednesday and Thursday. In addition, I’ll be live blogging the draft beginning at 6 p.m. CST Thursday from the Prudential Center in New Jersey, while the rest of the KUsports.com crew holds down the fort back here.

With only a few days remaining before the draft, be sure to check out our 2011 KUsports.com NBA Draft contest.

To enter, make sure you’re signed up for a KUSports.com account and ENTER THE CONTEST for a chance to win a $100 in KU gear.

There’s a lot more where this came from, but, for now, we just wanted to make sure that those of you who love to follow your Jayhawks beyond Allen Fieldhouse and the streets of Lawrence were aware that we’ll have someone in New York for all of your 2011 NBA Draft needs.

Check back later in the week, as I’ll unveil my predictions for where the twins and Selby will be picked.

Don’t worry, I’m not eligible to win the contest.

I am a little surprised that Selby has not shown up on most if any "mock drafts" in the first round, unless I missed it. But what really surprised me was that, in about half the drafts I looked at, he didn't show up in the second round either.

Am I just not looking at the more valid drafts or did something happen to devaluate Josh's status?

He hasn't shown up as a lottery pick but he has consistently shown up in the first round.

After a great start, Selby had a couple of bad workouts and when that happens word spreads like wild fire... He simply hasn't had enough time/opportunity to recover from those.

I'm still guessing he could be late first-round, but by no means is anything guaranteed now.

Another factor: Because he has a history of injuries, there could be something brewing there, too.

I have heard he has under-impressed at a couple of the team workouts. That is only hearsay however as I can not find clear information to back that up, only a reference here and there. However this article sums his current position up pretty well I think.

What about our hard working guards..Morningstar and Reed, where are they going to play ???? Stay in the states or overseas??

Actually, Tyrel recently signed with an agent and will be pursuing overseas opportunities. He wants to play until he can't play any more and there should be plenty of opportunities for him to do so in Europe.

Looks like your rec team will have to move to Plan B.

Is Coach Self going to be there this year?

I know Coach Self tried to arrange his schedule to make it work, but I don't think he's going to be able to make it. Too bad.

If you and the twins are looking for some good BBQ in NYC... try Virgils. It's just off Times Square and it is surprisingly good for New--York--City.

Have fun out there and good luck to Marc, Keiff and Josh !!

Matt- Thank you for the info, and I look forward to checking you out here on the big day!