What caught my eye from Day 7 of spring drills 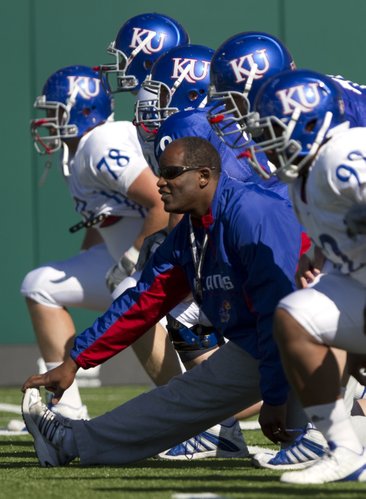 Kansas head coach Turner Gill stretches out with his players during practice on Monday, April 11, 2011 at the practice fields near Memorial Stadium. by Nick Krug

For the third time this spring, the media was invited to the practice fields at Kansas University to check out 15-20 minutes of the KU football team’s practice.

Today’s practice was the first after last Saturday’s scrimmage, in which newcomers Darrian Miller (4 TDs) and Julius Green (several tackles for loss) were said to have stood out.

Instead of relying on the word of those who saw the scrimmage, I was allowed to make my own observations at today’s practice. Here’s a quick look at what I came up with:

Wildcat offense looks to be in the KU arsenal: After wondering in vain throughout 2010 if the Jayhawks would install the ‘Wildcat’ offense that incorporates a direct snap to a running back or wide receiver, it looks as if that will be part of the package this year. Monday, the Jayhawks called out “Jayhawk” several times — a play-call that’s done both verbally and by flapping one’s “wings” — and the team lined up quickly and without confusion each time it was called. The first few times they ran “Jayhawk” it was sophomore wide receiver Christian Matthews who took the snaps. Later, junior wideout Kale Pick took his turn. It should be fun to watch how that one unfolds this season.

Linebackers look bigger, faster: Thanks to the return of sophomore Huldon Tharp and the presence of transfer Darrius Willis, the KU linebacking corps, which includes returning starter Steven Johnson playing on the outside with Tharp, looks a lot faster, a lot more explosive and even a little bigger. Johnson (95 tackles and 2 sacks in 2010) seems to have added a little bulk this year and Tharp and Willis both look fast. While those three made up the first team, they were backed up by sophomore Steve Mestan (MLB), junior transfer Malcolm Walker (OLB) and sophomore Prinz Kande (OLB), a former safety who moved to linebacker during the offseason.

Brown bulks up: He played his best football of the season down the stretch last year and it looks as if that success continued into the offseason, as junior cornerback Greg Brown looks to have added around 10 pounds of muscle during the offseason. Brown, who played in all 12 games a season ago, appears to be a likely candidate to start at one cornerback position when the season kicks off in September.

Not all sunshine and rainbows: Maybe it was just a case of the Mondays, but even during drills run at half-speed, several members of both the first-team offense and the scout-team defense jumped offsides or took an early step during the Jayhawks’ pre-practice routine on Monday. The intensity seemed to be up a dozen notches by the end of practice, so, again, maybe it was just a slow start.

Injury update: Senior wide receiver Daymond Patterson (foot) was held out of practice again, sophomore defensive tackle Kevin Young received attention on-and-off during Monday’s practice, though he did participate, and junior running back Rell Lewis, who is attempting to come back from an ACL injury that kept him out all of last season, was seen wearing a brace on his injured knee and limping slightly. 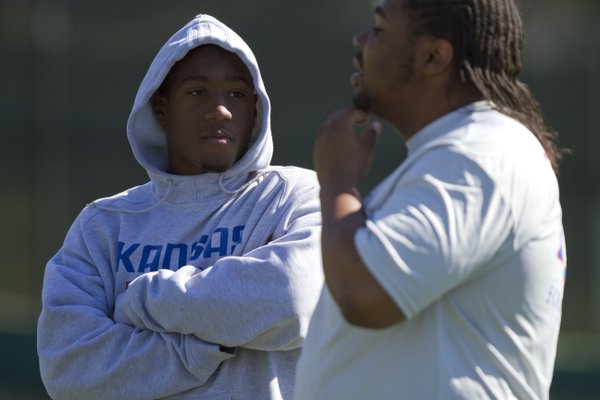 Matt: What about the quarterback position? Do Webb and Mecham look bigger, faster?

I'll have a story in tomorrow's paper (and online) about the quarterback race. Neither player looks much bigger or faster, but both look a lot more comfortable and confident. Be sure to check out the update tomorrow...

always look forward to these - thanks, Matt!

Great insight to whats going on Matt, thank you.

While adding to our wish list of, "What about this position", what about the D-line?

Nice review of DE & DT positions heading into Spring over at www.rockchalktalk.com.

That's still a big question mark, but it's not for lack of bodies. There are plenty of guys there, which should only increase the odds of them finding a few that can play.

Pat Dorsey, Kevin Young and Richard Johnson look like your best options inside, with Keba Agostinho and John Williams also factoring in.

And Toben Opurum, Julius Green and Tyrone Sellers should get a lot of the reps on the outside, with incoming freshman Michael Reynolds also getting a chance to make an impact.

I've got this on my list of positions to investigate, but, right now, I don't know if the coaching staff really knows what it's got here. That said, Green has gotten off to a good start.

I've been hounding the Prinz Kande move for a week. That seems like a pretty big move. What's up?

Kande is a highly rated "football player" with a nose for the ball. He could be instrumental to TGs speedy defense. I believe Torbush will utilize his cover skills and physical nature to help shape a top Big 12/10 defense.

This linebacking corps will be the most improved area of 2011.

Agree with the Kande comments, and improvement of the LBs.

It sounds like Kande will be used in the nickel, and as a reserve OLB.

I seem to recall Beshears lining up in a wildcat formation several times in 2010. In fact, if memory serves there was a game where KU ended up with Beshears as the only option at QB for several plays in a row due to injuries.

I'm sure they will run Beshears in it some this year too but Matthews and Pick give that extra element to it since they were both recruited as QBs. Surely they will do some rollout run/pass options.

The LB corps will also add a lot of speed and hitting power when/if Tunde Bakare makes it to campus this fall. It will definitely be nice to see some solid athletes at the LB and DB positions. I agree that the DL/pass rush is very important but so is the need for "athletes" at the athletic/skill positions. Our LBs were decent last year but it was painfully obvious they did not have Big 12 speed. Teams just spread them out and ran WR screen passes all day long.

What about the linebacker from the JUCO? I think his name is Tunde? Or something? How is he doing???

Tunde Bakare is who you're thinking of and he won't be here until this summer... He's still at Highland CC and he has to graduate from there before he can come down.

He'll definitely be one to watch, though...

Tait... Thanks for the great work. I have not heard #35 mentioned. The running back, linebacker, defensive end? What 's up with him this spring?

Funny you mention that. I just caught up with Toben yesterday and will have something on him sometime soon.

He seems very comfortable at D-End. He likes the spot and he said he also liked knowing what position he would be playing and staying there. All that moving around made it feel like he was always playing catch-up...

I'd expect a strong year from him. His speed should be a major weapon and should make up for his lack of DL size...