Pick the right choice at QB for KU

The choice did not come without thought. Weeks of evaluation by Gill and his coaching staff — particularly offensive coordinator Chuck Long — led to the decision to name Pick the starter.

Now that he’s done so, Gill and the Jayhawks can move on and start preparing for the season opener Sept. 4.

Let the fun begin. Every day from here on out will be different for the Jayhawks. Pick is now their unquestioned leader. Although seniors Sal Capra, Chris Harris, Jake Laptad, Angus Quigley and Justin Springer officially were named captains on Wednesday, Pick’s leadership ability will go the furthest in determining how the Jayhawks fare this season.

That’s good news for Kansas fans because that’s the main reason Pick won the job. Throughout the weeks that he battled with red-shirt freshman Jordan Webb, Pick carried himself with more confidence and, in many ways, seemed to be a natural leader.

I spent quite a lot of time around both guys during those weeks and, although I grew to like Webb a lot — classy, kind, down-to-earth, a genuine joy to talk with — I always came away feeling as if Pick was right guy for the job.

Call it the it factor, call it whatever you want, but Pick has it. It just seems as if he was born to inherit this job, be it at Kansas or on some other college campus. 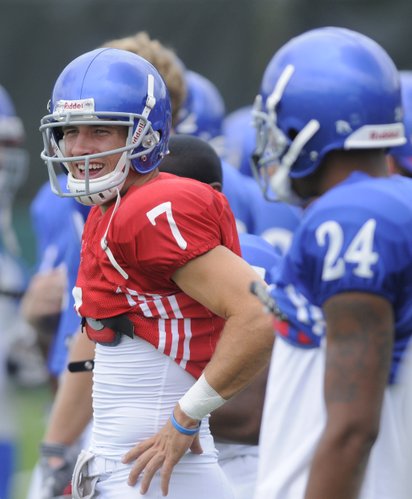 Kansas quarterback Kale Pick (7) cracks a smile as he and his teammates run through drills during practice on Tuesday at KU’s practice fields. KU coach Turner Gill declared Pick the starting quarterback on Thursday. by Nick Krug

Make no mistake, though, Pick did not simply inherit the job. He earned it. And he earned it by winning a battle against a very capable opponent.

It’s no secret by now that Webb has the better arm of the two. High school highlight videos reveal that Webb also has the ability to improvise when plays break down, sort of the same thing that Todd Reesing brought to the table, albeit in a less effective manner thus far. Webb also used his intelligence and desire to soak up the offense like a sponge to benefit him in the competition.

That’s what makes Pick’s victory all the more impressive. The coaches never said it (nor would they), but you almost got the sense that, because of his arm strength, they wanted to give Webb every opportunity to win the quarterback job. Play-calling becomes a lot easier when you’ve got a guy who can stretch the field with a flick of his wrist.

That’s why the battle went into the third week of preseason camp. Ultimately, though, Pick’s skillset — he’s very good at a little bit of everything — and his demeanor won him the job. As I mentioned before, it just seems as if the guy was born to be a college quarterback. He’s got the look, he’s got the name (if Kale Pick weren’t good enough already Johnny Quarterback would suffice), he’s got the confidence and he’s got the ability. 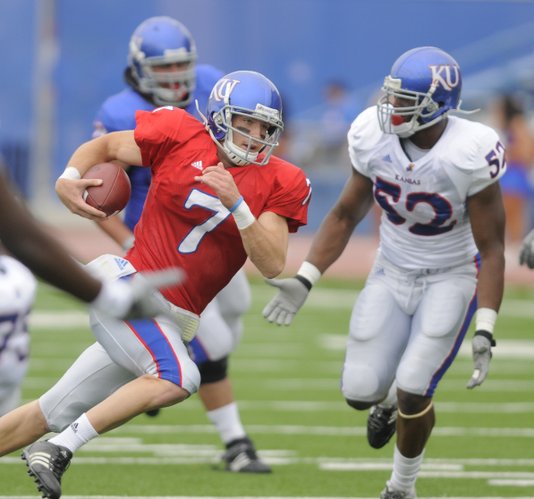 Blue Team quarterback Kale Pick takes off on a run past White Team linebacker Steven Johnson during the first half of the Spring Game Saturday, April 24, 2010 at Memorial Stadium. by Nick Krug

Now he just needs to show it in games. And there’s no doubt in my mind that he will. With a plethora of capable running backs and dangerous wideouts — not to mention tight end Tim Biere — surrounding him, Pick will have his, well, pick of options on just about every play. And because his physical attributes — strong and decisive in the pocket, good arm, good instincts and willingness to scoot forward for positive yardage with his feet — will allow him to find ways to get the ball in the right hands, he should do very well in running KU’s offense into the new era.

I asked Pick on Thursday if he saw himself in the same mold as Trent Dilfer or Brad Johnson, former NFL quarterbacks known as “game managers,” who led their respective teams to Super Bowl titles.

Pick’s answer shows exactly why he was chosen to be the KU leader.

“I wouldn’t put myself in the same category as those quarterbacks,” he said. “Probably more than that.”

Asked further if he expected the job to be a breeze because of all of the capable bodies around him, Pick gave a nod to his teammates.

“I don’t know about easy, it’s pretty tough playing quarterback,” he said. “But it helps. We have good weapons out here, for sure, and they do make it easier on me. If I throw a short pass to Daymond (Patterson) and he takes it to the house for about 50 yards, that’s definitely easy. We have a lot of talent and it does help me out.”

Now, with the guessing and speculating done, the Jayhawks have 15 days to put that talent together in a manner that will win games.

In the top picture with Pick smiling, he looks like a young Joe Montana.

Matt- Thanks for the positive spin on the results of a summer long competition. The right way to determine the depth chart. The Operum situation will work itself out. I do not believe MM left the cupboard bare and game coaching will make or break this season and any shot at a bowl.

Totally agree, look at how solid the '08 and '09 recruiting classes were. Those guys are now going to start contributing with a year or two of college coaching and strength and conditioning under their belts. I understand not being favorites in the Big XII North but I really feel people are underestimating us. If Coach Gill can motivate and coach like I think he can we will be pretty solid. I can not wait to watch this team this year!

Matt, I have to agree. I think Pick is the right choice, but I'm also very grateful that we have such an outstanding talent at #2. As we all know, football is a very physical sport, and it's such a luxury to have two capable players at such a key position. And what a blessing that they are both so young! Webb, in particular, is just a redshirt freshman. There's a lot of growth and improvement of his game that still lay ahead, if he uses this situation as motivation.

Didn't Houston Nutt, while at Arkansas, originally get an oral commitment from Pick? Nutt is a good coach and good judge of talent.... glad Pick is a Jayhawk!

For several reasons, Pick was my "pick" all along. He looks the part, he thinks the part, he feels the part. And, he had two full years to grasp the inspiration a QB (ala Reesing) can and must bring to the huddle.

That said, Webb isn't just "the other guy." He's a hell of a talent, eager and willing to develop himself into what the team needs in a backup; or to step in and do what's needed when needed.

Very fortunate to have them both busting butts to improve on every down of every day.

If memory serves, wasn't it just a few years ago when a guy who looked the part and was born to play college quarterback got injured, only to be replaced by a scrappy, innovative qb? Seemed to work out pretty well for both of them in the end.

You never know until a guy plays when it counts. The coaching staff knows what they are doing, they've watched these guys for hours and hours. But game time is show time......we'll see.

523-- I totally agree with you. I think we are so underrated in the Big 12 North. I understand we haven't proved anything but when the games begin, especially the Conference games, time will tell---just like you, can't wait!

To steal a phrase that was brought up on ESPN.com a while ago (in reference to college basketball)- The season needs to hurry up and get here. Now.

"With a plethora of capable running backs and dangerous wideouts — not to mention tight end Tim Biere — surrounding him, Pick will have his, well, pick of options on just about every play."

Plethora - yes, but especially at RB there is a definite lack of experience, especially with Opurum switching and Lewis injured (ACL? Out for the season?).

I'm still super excited about the season, and then even more so to see the recruits asking to join in.

I agree with the others who say KU's underrated this year. It's understandable that with so much talent having left, outsiders wouldn't pay much attention to this year's team. But I think people who really know about what we have left can still see that there's a lot there. Combine that with the fact that the players will actually have positive motivation to play for their coach and this team is capable of a very solid year. I think 8-4 is a realistic possibility.