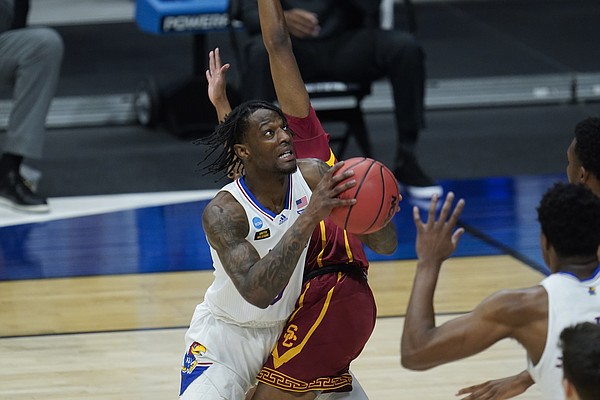 Kansas guard Marcus Garrett (0) tries to shoot around a USC defender during the first half of a men's college basketball game in the second round of the NCAA tournament at Hinkle Fieldhouse in Indianapolis, Monday, March 22, 2021. (AP Photo/Paul Sancya) by Associated Press

The way the Jayhawks struggled to score inside this season, Kansas was going to need some good fortune in terms of March Madness matchups to make any kind of deep run in 2021.

In the NCAA Tournament’s 68-team field, there might not have been any team more perfectly suited to knock out Kansas than USC.

Considering how often the Jayhawks (21-9) had issues converting around the rim throughout the season, it was going to take an out of character or out of body experience Monday night in Indianapolis for them to turn a weakness into a strength.

So, of course, missed shots inside cost them in a second-round drubbing at the hands — attached to long, distracting, shot-altering arms — of the Trojans.

Bill Self knows this team better than anybody, and shortly after KU’s season ended a round shy of the Sweet 16, Self said during his postgame video press conference late Monday night that he knew USC was not an ideal matchup for the Jayhawks.

“I would never say this to our team, but I wouldn't have been disappointed if Drake had won the game against SC,” Self said of the first-round game that determined KU’s second-round opponent, “not because Drake is not good, just because it's hard for us to match up with length and athletic ability. That's been the downfall of our team all year long. I think that was probably as evident tonight as it has been in a long time.”

While 16 teams remain in the hunt for the 2021 NCAA championship, the Jayhawks’ season ended with them converting just five of their 13 layup attempts against a USC defense that Self had said the day before the loss reminded him a lot of the long arms of the Texas Longhorns, who swept KU in the regular season.

It’s hard to build momentum in a high stakes March Madness game when you struggle to score right around the hoop, and before long USC was sprinting away to the next round, as the Jayhawks became more discouraged about their inability to go find easy baskets inside.

The Jayhawks’ issues finishing at a high rate inside were prevalent throughout the season. But it proved difficult to solve the problem. As Self said several times during the past few months, KU lacked “guys that play above the rim.”

Self said after USC exposed KU’s weaknesses that he hoped to address the team’s glaring need for length and athleticism through recruiting. This year’s roster had some solid players, but none of them would be considered strong finishers at the rim.

According to hoop-math.com, senior guard Marcus Garrett ended up leading KU in made baskets at the rim, with 73, just ahead of junior big man David McCormack’s 70. Garrett scored 58.9% of the time at the rim, while McCormack was only slightly better, at 60.9%. Among KU’s rotation players, senior Mitch Lightfoot had the best percentage, 66.7%. But as a reserve playing limited minutes, Lightfoot only contributed 20 buckets from point-blank range during the course of the year.

KU’s 58.1% field goal percentage around the rim was uncharacteristic of Self’s teams. In seven of the past 10 seasons, the Jayhawks have shot 64% or better around the rim.

With this KU roster, it was going to take a stellar defensive performance as well as a solid, if not spectacular, night from beyond the arc for the Jayhawks to give USC a fight. And the Jayhawks got neither.

(Player with most made shots at rim listed) 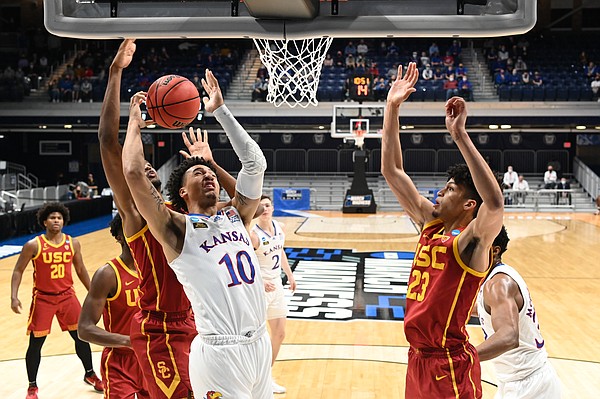