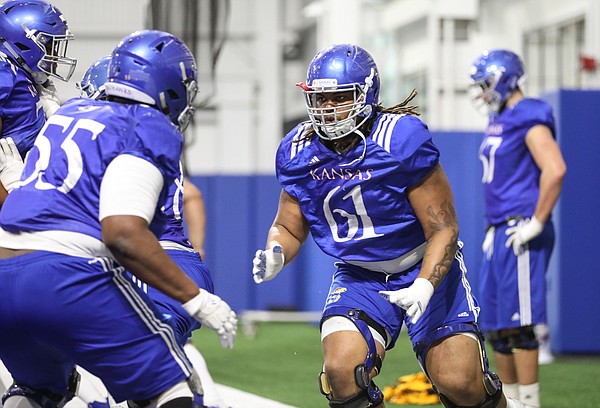 I know what you’re thinking.

“Wait a minute. Two players for one spot on the countdown? Isn’t that kind of cheating?”

You make some great points here. But, ultimately, this is a list that I decided to put together. So I’m just going to break the rules. This is tyranny at its worst. (Not really. It’s just a football list. You’ll get over it.)

Besides, it’s hard to think about either Malik Clark at left guard or Hakeem Adeniji at left tackle without picturing them in tandem.

Both started throughout the 2018 season and now they head into Year 1 of the Les Miles Era at KU as the two O-linemen most likely to succeed.

Adeniji has singled out Clark as one of the most improved players in their position group over the course of the offseason. Clark, meanwhile, doesn’t want to take much personal credit for that.

“I think it’s just the chemistry me and Hakeem have,” Clark said of a major factor in his development. “Like on our double teams, our communication and all of that, that’s making us better.”

Clark, now a 6-foot-4, 315-pound junior, and Adeniji, a 6-5, 300-pound senior, actually arrived at KU in the same class, ahead of the 2016 season, before Clark took a redshirt in 2017. The two were roommates their first two years in the program, which contributed to how well they work together now.

“We used to have long talks,” Clark shared, “about where our heart is with football, where we’ve got to get at and how we’ve got to turn this program around. I’d say that’s how he helped me. Just having a heart to heart conversation with him. And us being close.”

However, Clark hesitates to lump himself in with Adeniji when it comes to who is setting the tone for the group of blockers up front.

“I’d say Hakeem and Api (Mane, a center) are like the voices of the O-line,” Clark said. “I’m just the guy in the back that just follows directions. That’s all.” 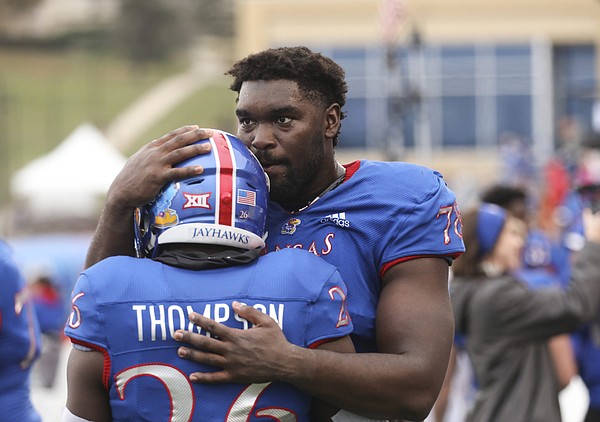 Miles, who has often complimented the O-line as a group, called Adeniji one of the top tackle prospects in the Big 12, and said Clark is “going to be a big, strong man” for the KU offense.

“There’s some talented, talented guys there,” the head coach added.

Their position coach, Luke Meadows, thinks highly of both Clark and Adeniji, as well. Meadows said Clark has shown significant growth just since the spring.

According to Clark, a New Orleans native who played for KU running backs coach Tony Hull at Warren Easton High, he put in a lot of monotonous work in order to improve.

“My footwork, of course, and my hand placement,” Clark said of his areas of focus for the offseason. “And keeping my eyes in my gap. You know, just the little things I wasn’t doing as good until (Meadows) came here.”

Adeniji hasn’t missed a game — or a start — since joining the program in 2016. The left tackle from Garland, Texas, wants to make sure this season is memorable.

“It’s my last year. I want to go out with a bang, on a personal level but more on a team level,” Adeniji said. “I think we have the right pieces, the right coaches and everything to do that. So I’m very excited.”