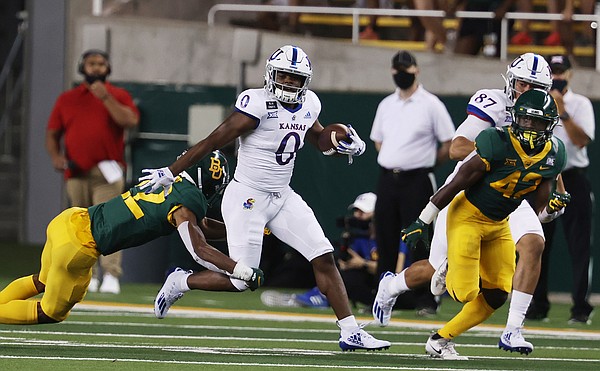 While various sports books and websites have continued this summer to roll out some exceedingly long odds for KU football, some new over/under bets posted this week by SportsBettingDime.com figure to be more compelling for those who follow the Jayhawks.

First of all, SBD, which posted regular season statistical over/unders for every Power Five program, landed on 1.0 wins for KU football’s over/under total in 2021. Basically, the Jayhawks are expected to open the Leipold era with a victory over South Dakota on Sept. 3, but play the familiar role of underdog in every other game on the schedule.

Do you think KU can pull off an upset on the road at Coastal Carolina or Duke early in the season? Or beat — just one of — any of the other nine Big 12 programs? If you do, well, you may consider this over/under a source of some easy money.

The most eye-grabbing portion of SBD’s over/under offerings, though, had to do with KU’s personnel. The site is essentially predicting that former North Texas starter Jason Bean will emerge as the Jayhawks’ starting quarterback for 2021.

The online sports book placed the over/under for Bean’s passing yards during his first season in a KU uniform at 1,415.5, and gave the incoming transfer QB an over/under passing touchdowns total of 12.5.

And if you really want to go crazy, SBD has odds for Bean winning the Heisman Trophy at +200,000.

In 2020, Bean was involved in a QB competition with the Mean Green throughout much of the season. Bean threw for 1,131 yards and 14 touchdowns in eight appearances. He went 79-for-145 through the air, with five interceptions and finished with a 54.5% completion percentage.

All of that being said, there’s also a chance Bean could end up as a backup QB for KU. Remember: the Jayhawks haven’t even practiced under Leipold yet, and the QB race truly will be determined during preseason camp, when Leipold and his staff finally get to evaluate all of the QBs live and in person.

The betting experts at SBD also have over/unders for KU’s potential leading rusher and receiver. The sports book zeroed in on No. 0, Velton Gardner, as the likely top runner. Gardner’s over/under for total rushing yards this fall was set at 650.5.

Headed into his third season with the Jayhawks, Gardner is coming off an injury-shortened sophomore campaign, during which the 5-foot-9, 195-pound back from Dallas played in six games but still led the team in rushing. Gardner ran for 325 yards and two TDs in 2020, when he averaged 4.5 yards per carry.

The running back room, though, appears to be crowded this year, with Daniel Hishaw Jr. and Amauri Pesek-Hickson returning and standout Lawrence High product Devin Neal joining the group.

Who will be the Jayhawks’ top passing target? If SBD’s projections are right, it will be the same man who led the receiving unit last year, Kwamie Lassiter II. A super-senior with more college game experience than the other wideouts in the group, Lassiter was given an over/under of 687.5 total receiving yards.

That number would be a new career high for Lassiter, who in eight starts and one appearance as a reserve in 2020 led KU with 458 receiving yards and 43 receptions.