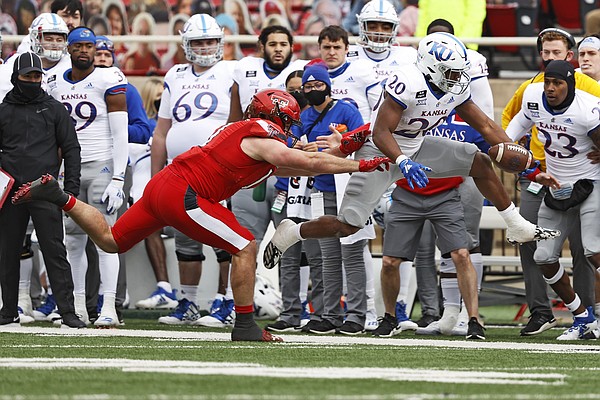 Assembling a conclusive list of all the factors that led to the Kansas football team going winless in 2020 would be time consuming. But one component that surged to the forefront was the staggering lack of continuity with the roster.

Back when this strange, pandemic shortened season began in September, with the Jayhawks taking on soon-to-be college football darling Coastal Carolina, KU’s starting lineup included quarterback Thomas MacVittie, running back Pooka Williams, linebackers Dru Prox and Denzel Feaster, safety Davon Ferguson, and offensive linemen Jacobi Lott and Chris Hughes. It only took a matter of weeks for some of them to become non-factors for KU, through injury or opt out or some other reason. And late in the season none of them were available to start anymore.

At receiver, a perceived strength for KU entering the season, Stephon Robinson Jr. started three games early on, but barely played in any of them while dealing with injury issues. And then Robinson had season-ending surgery.

Even though the Jayhawks had solid depth at the running back spot, after Williams opted out four games into the schedule, new No. 1 rusher Velton Gardner only got to play two more games before his year came to a premature conclusion due to an undisclosed injury. Then freshman back Daniel Hishaw Jr. had to miss a game due to COVID protocols and freshman Amauri Pesek-Hickson, the No. 4 running back when the season began, started a game.

KU’s defense didn’t have to deal with that extent of instability. But the loss of a playmaking linebacker in Prox to an opt out four games into the season proved to be brutal.

Injuries and opt outs proved to be issues for many college football programs in 2020. But such obstacles are even more challenging to navigate at a place like KU, where instability has been the norm for more than a decade now. Head coaches, position coaches and coordinators frequently coming and going has been one of the few consistent aspects of KU football since Mark Mangino was forced out following the 2009 season. Since then, administrators and KU football coaches alike have struggled to bring some semblance of stability to the program and its roster.

Maybe 2021 will be the year that begins to change. The Jayhawks definitely could’ve benefited from Parchment and Robinson returning for a bonus senior season. But the vast majority of the players you would put on a perfect world two-deep (where injuries weren’t an issue) at the end of the year could return. Along with all the freshmen, sophomores and juniors who played key roles during an albeit difficult year, KU might be able to bring back seniors such as receiver Lassiter, offensive linemen Clark, Hughes and Adagio Lopeti, and safeties Thomas and Betts. Linebacker Johnson and nose tackle Burt already have shared they plan to take advantage of the NCAA’s blanket waiver for an extra year of eligibility. And as long as we’re on the topic of ideal scenarios, some of those veterans could become key reserves instead of starters if KU’s coaches can develop the youngest players in the program.

Plus, of course, the Jayhawks will add the 2021 recruiting class, another group that could be comprised totally of high school recruits, just like Miles and his staff did with the 2020 class.

Some continuity might be coming to the KU football program in Miles’ third season in charge. And the Jayhawks need some of that first before they can start expecting to produce winning seasons again.