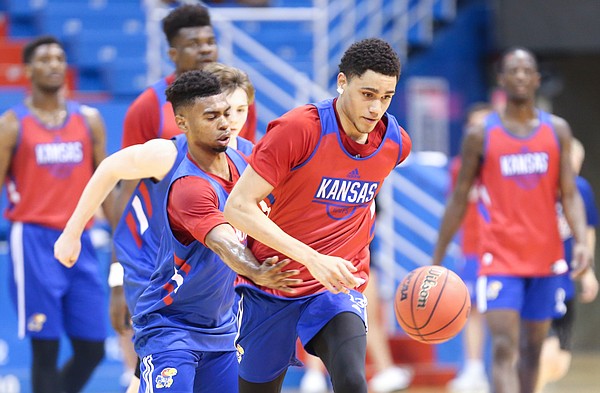 Kansas freshman Tristan Enaruna pushes the ball up the court as fellow freshman Isaac McBride defends during a scrimmage on Tuesday, June 11, 2019 at Allen Fieldhouse. by Nick Krug

Not one of the four four-star freshmen on the 2019-20 roster screams guaranteed NBA lottery pick at this point, the earliest stage, of each of their college basketball careers at the University of Kansas.

Yet not one of them has failed to impress their new teammates and coaches in one fashion or another during their brief time on KU’s campus.

The Jayhawks’ supposedly underwhelming — at least by the ridiculous standards of this particular program — freshman class is full of players Bill Self is convinced will contribute at some point in the future, even if the coach has not figured out quite yet how much KU will ask of forwards Jalen Wilson and Tristan Enaruna or guards Issac McBride and Christian Braun during their collective debut season.

For what the freshmen may — for now — lack in jawdropping talent or five-star power, it seems they are making up for it with the types of efforts that will earn them not only respect, but also playing time.

“They came in here ready to work,” sophomore David McCormack said Monday of what the youngest and newest players on the team have done to stand out so far. “They play hard. Definitely. The whole group of freshmen, they’re tough. They don’t take crap from no one when it comes to practice or games or anything.”

Perhaps that’s why Self thinks all four could end up factoring into KU’s rotation this coming season.

“I think they’re all good players,” Self said on more than one occasion of the freshmen on Monday. “I think we’ve got to figure out some things with the minutes standpoint, which may be a situation we didn’t think we would have to deal with. But, hey, they’ve all been good (on the court since arriving).” 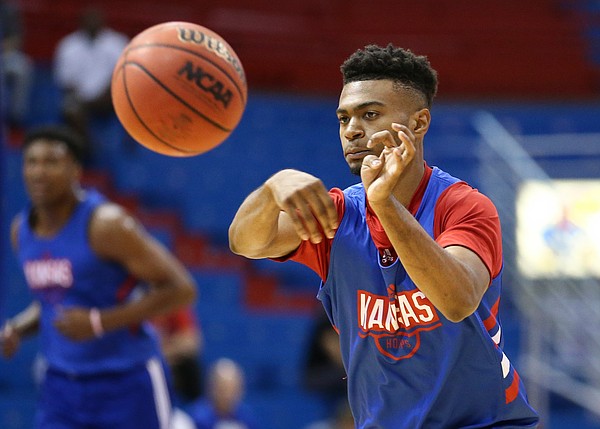 Kansas newcomer Isaac McBride throws a pass during a scrimmage on Tuesday, June 11, 2019 at Allen Fieldhouse. by Nick Krug

Ahead of his 17th season at KU, Self made it clear neither Wilson, Enaruna, McBride nor Braun will leave the type of footprints as freshmen that some of the more heralded recruits Self and his staff have landed through the years, citing the names Andrew Wiggins, Kelly Oubre Jr., Ben McLemore and Josh Jackson.

“But these guys are going to be really good college players,” Self predicted.

From what senior forward Mitch Lightfoot — he’s already a senior? — has witnessed from the freshmen during the summer, he thinks they can make a “huge” impact for the Jayhawks.

“The thing about these freshmen is they play so hard. They’re all willing to get better from what I’ve seen,” Lightfoot shared. “They like to learn. And then coach is obviously confident in them and he’s letting them know that. I think that’s important for them for their development.”

Wilson, who just committed to KU this past week, didn’t arrive in Lawrence until the weekend. On Monday afternoon, when he left KU’s locker room inside Allen Fieldhouse to head to a training session, he turned the wrong direction before Self redirected him toward the correct destination.

The coach and the 6-foot-8 forward who had previously planned to play at Michigan are just getting to know each other. At the moment Self was asked what Wilson will bring to KU’s lineup, the coach made sure to point out that he had only worked with the freshman once since Wilson enrolled.

“But he gives us size, he gives us toughness and he gives us skill,” Self said. “He’s not going to wow you like some people may think, like Josh (Jackson) could from an athletic standpoint and quick twitch standpoint. But he just knows how to play. He’s a winner. And I think his ability to shoot the ball is probably as good, close to as good as anybody on our team. And to have that as a guy that’s potentially a bad matchup four at least at times during the game, I think, is going to be real important to us.”

All four freshmen figure to prove themselves as vital components of a winning KU team next season. Wilson and the 6-8 Enaruna give the Jayhawks some flexibility and size on the wing whenever needed. McBride looks like an ideal backup point guard for Devon Dotson, and would also feel comfortable playing with Dotson. Braun could prove to be one of the Jayhawks’ better 3-point shooters.

None of them will be asked to carry more of a load than they can handle. And all of them just might end up too hardnosed and essential to keep out of a deep KU rotation.