Getting reacquainted with the Longhorns 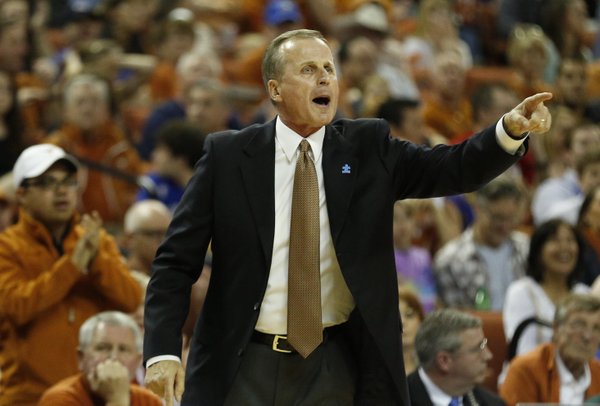 Texas head coach Rick Barnes calls a play during the first half on Saturday, Feb. 1, 2014 at Erwin Center in Austin, Texas. by Nick Krug

Three weeks ago, Rick Barnes' Texas basketball team handled Kansas in Austin, Texas, giving the Longhorns their fourth straight win over a top-25 team and catapulting them into the chase for the Big 12 championship.

The Horns' bigs gave the Jayhawks fits, and point guard Isaiah Taylor flew up and down the floor, rarely slowing down.

A pair of road setbacks since UT's defeat of Kansas on Feb. 1 kept the Longhorns from gaining any more ground on KU. Here is what Texas has done since knocking off the Jayhawks:

That leaves the top half of the Big 12 standings looking like this, heading into Saturday's marquee matchup between the top two teams in the conference:

If the Jayhawks earn some redemption for their 81-69 loss at Texas tonight, a 10th straight Big 12 championship becomes even more attainable. If the Longhorns pull off a sweep of KU, the next couple of weeks become very interesting in the Big 12 title chase.

Texas held KU to 38.5% shooting in the first meeting. In the Longhorns' nine conference wins this season, opponents have scored 66.1 points and shot 38.1% from the floor — plus a 29.2% mark from 3-point range.

In their four Big 12 losses, the Longhorns allowed an average of 83.5 points per game on 47.6% shooting.

Now, it's time to get reacquainted with the Longhorns who will try to duplicate that success in tonight's rematch. 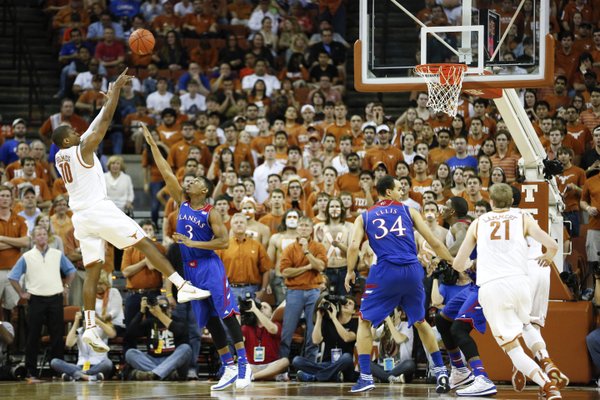 Texas forward Jonathan Holmes turns for a shot over Kansas guard Andrew White during the first half on Saturday, Feb. 1, 2014 at Erwin Center in Austin, Texas. by Nick Krug

The team's most experienced player and a certain leader, Holmes averages 13.1 points and 7.4 rebounds.

The one thing he doesn't do much of on offense is pass to set up someone else: 16 assists this season vs. 43 turnovers.

He hauled in a UT season-high 16 boards (including six on offense) in the Longhorns' win at TCU on Feb. 4.

Defensively, Holmes is one of three UT players in the top eight in the league in blocked shots. At 6-8, he's eighth, with 1.21 swats a game. 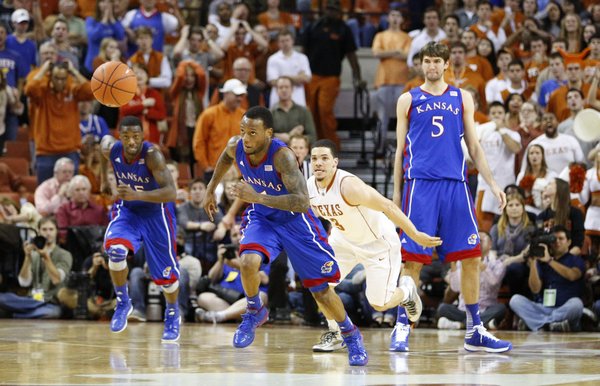 Kansas guard Naadir Tharpe chases down a loose ball past Texas guard Javan Felix late in the second half on Saturday, Jan. 19, 2013 at Frank Erwin Center in Austin, Texas. by Nick Krug

The undersized guard scored 16 points and nailed four 3-pointers for the second game in a row in UT's loss to Iowa State this week.

Felix leads UT with 44 3-pointers this season, and he attempts 5.3 a game, making 33%. He hit what proved to be a game-winner in the final seconds of overtime at Temple in December.

The speedy freshman was a highlight reel waiting to happen against Kansas in Austin, Texas.

Taylor averages 13.1 points and 3.7 assists on the season, but is coming off another breakout game at Iowa State, where he scored 26 points, and had eight assists, seven rebounds and one turnover.

Taylor has only taken 15 3-pointers this season, but uses his speed to create high-percentage opportunities, and shoots 41.7% from the floor.

In his last seven games, Taylor is averaging 19.1 points and shooting 45.3% from the floor. At the foul line in that stretch he has only missed three of his 50 free throws.

Texas center Cameron Ridley throws down a dunk before Kansas center Joel Embiid after being fouled during the second half on Saturday, Feb. 1, 2014 at Erwin Center in Austin, Texas. by Nick Krug

The ginormous center delivered one of the most impressive plays of the game against Kansas three weeks ago, nearly tearing down the rim on a dunk as he went past Joel Embiid.

Usually the last offensive option when he is on the floor, Holland still averages 7.8 points a game.

Still, as a guard he averages 5.0 rebounds and does enough little things that he leads UT in minutes a game this season: 31.12.

Though he comes off the bench, Lammert has scored in double figures four times this season.

The sixth man averages 5.7 points and is third on the team with 5.0 rebounds.

Overall from the floor, Lammert has made 49.6% of his shots. 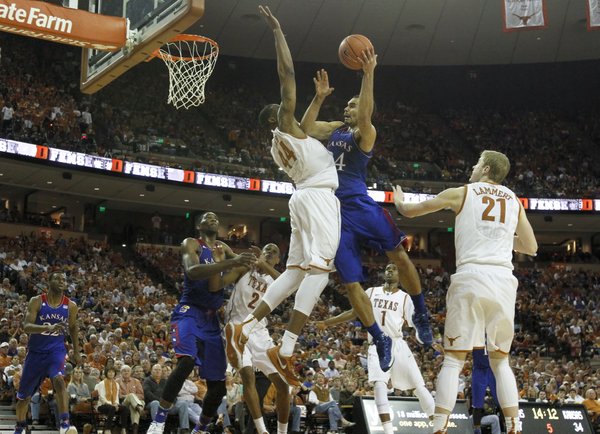 Kansas forward Perry Ellis turns for a shot against Texas center Prince Ibeh during the second half on Saturday, Feb. 1, 2014 at Erwin Center in Austin, Texas. by Nick Krug

Ibeh didn't play a ton against Kansas, but he proved to be as significant a deterrent to the Jayhawks' offense as anybody in burnt orange, swatting away four KU shot attempts.