The case for D.J. Eliot as KU’s interim head coach 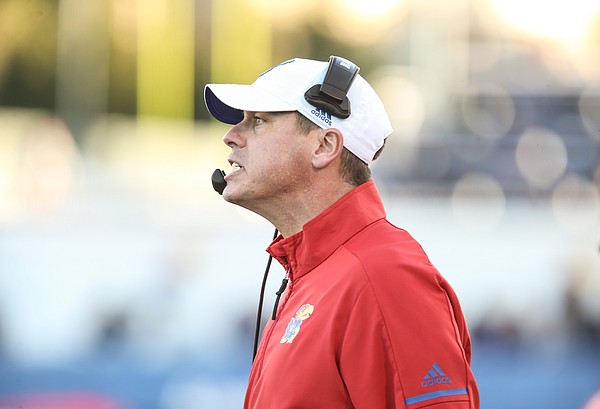 At some point in the next 24 to 48 hours, the Kansas football program is expected to at least have an interim head coach in place, even if that person ends up merely keeping the seat warm for a yet to be determined replacement for Les Miles.

As KU Athletic Director Jeff Long weighs his options for the present and future of the program, two current KU assistants seem to be the most obvious candidates for the job, either on an interim or permanent basis.

Among the current staff members, only receivers coach and passing game coordinator Emmett Jones and defensive coordinator and linebackers coach D.J. Eliot have played prominent roles for KU throughout the previous two-plus years.

Some of the reasons that Jones would be a sensible hire already have been highlighted by Matt Tait. So let’s also take a closer look at Eliot.

Obviously the Jayhawks’ third-year coordinator has more Power Five experience than anyone on the staff, having also led the defenses at both Colorado (2017-18) in the Pac-12 and Kentucky in the SEC (2013-16). And even before that, Eliot was coaching defensive ends at Florida State (2010-12) in the ACC.

One unique experience that Eliot brings to the table is his time at UK, where he was part of a Mark Stoops staff that turned a football program around at a basketball school. That’s the exact scenario KU’s administration is looking for. The Wildcats were 2-10 the year before Stoops took over. And when Eliot and other coaches joined him on the ground floor in 2013, UK went 2-10 again. But the Wildcats steadily improved from there — 5-7 in 2014, 5-7 in 2015 and 7-6 and a bowl berth in 2016, before Eliot left to work at Colorado.

Rebuilds take time, as KU football fans know all too well. And Eliot just a few years back helped orchestrate one in the SEC.

One major issue for KU since Mark Mangino left following the 2009 season, leading to the program began falling apart, has been the constant turnover throughout the coaching staff. Finding some stability by giving the interim — or permanent — job to someone such as Eliot and Jones could help avoid the Jayhawks taking too many steps backward (again) in this perpetual rebuild.

There’s no learning curve for Eliot or Jones at KU anymore. They’ve been here. They know the players. They know the challenges of coaching and recruiting at KU. The Jayhawks long have been in need of some continuity.

It certainly doesn’t hurt Eliot’s case, either, that entering the 2021 season, many of KU’s most promising young players are on defense. It was the play on that side of the ball that showed flashes of promise for the future in 2020, as Jayhawks such as safety Kenny Logan Jr., cornerback Karon Prunty and defensive linemen Marcus Harris and Da’Jon Terry emerged. Eliot, defensive backs coach Chevis Jackson, defensive line coach Kwahn Drake and safeties coach Jordan Peterson deserve some credit for helping the defense stand out for good reasons at times during a challenging 0-9 campaign.

Eliot came to KU in 2018 as one of Miles’ first few hires. And he took the job with the Jayhawks instead of going to work at a better program, Ole Miss, in the SEC. Following his first year at KU, Eliot turned down an assistant coaching job with the Arizona Cardinals in the NFL. So it seems like Eliot is fond of KU and Lawrence, and willing to see what can become of these young players.

Whomever ends up getting the job, it will take someone invested in the program and serious about rebuilding it the right way — with year after year of high school signing classes — for KU football to finally turn a corner. Eliot and Jones sure look like candidates who would check those boxes.