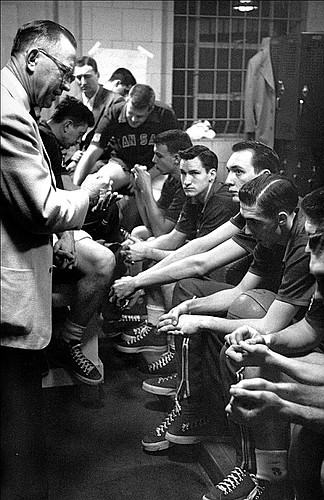 Known not just for his contributions to the game of basketball, but also for his class and love for his players, Dean Smith’s legend continues to grow — even after his death.

Before Smith died, the former Kansas basketball player and legendary North Carolina coach made sure he left a little “thank you” behind for each of his former players.

A photo of a letter sent out from Smith’s trust began circulating on social media Thursday afternoon.

All 180 of Dean Smith's players received request to update their address. They now know why: http://t.co/XYWQiwY0Ww pic.twitter.com/2oETyLY1xv

The message, as shown in the note sent to former UNC player Dante Calabria, explained that Smith set up his will to give $200 to each Tar Heel he coached during his time in Chapel Hill:

“Each player was important and special to Coach Smith and when he prepared his estate plan, Coach wanted to reach out to each of his lettermen. Accordingly, Coach directed that following his passing each letterman be sent a two hundred dollar check with the message, ‘enjoy a dinner out, compliments of Coach Dean Smith.’”

What a cool gesture.

Smith, a native of Emporia, played at KU under Phog Allen, and came off the bench for the Jayhawks when they won the 1952 national championship game against St. John’s.