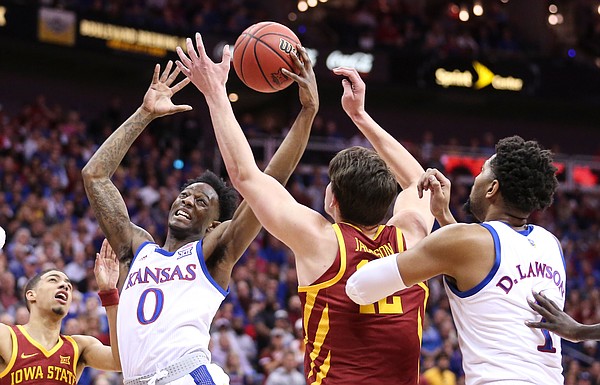 KU couldn’t immediately settle in offensively in the first half, with a rowdy bunch of ISU fans screaming in support of every play that went the Cyclones’ way. The Jayhawks didn’t appear anything close to rattled. But they definitely weren’t crisp, and ISU jumped out to a 13-8 lead.

Still, the slow offensive start seemed contagious at times, as KU missed layups, 3-pointers and free throws throughout most of the first half. With 4:12 left before halftime, the Jayhawks were 10 for 31 from the floor (8 for 16 on layups), 0 for 7 on 3-pointers and 1 for 6 at the foul line. At that point, ISU led 27-21.

The Cyclones’ lead would grow to 11 before KU could get out of the miserable half and head to the locker room. The Jayhawks went almost 6 full minutes without even scoring late in the half, before Dedric Lawson went 1-for-2 at the foul line with 0:38 to go. Devon Dotson accounted for the last field goal of the half with 6:34 on the clock.

Down 32-22 entering the second half, KU’s offense improved. But how could it have been worse?

Even though KU made much better use of its trips into the paint in the second half, they spent basically the entirety of the half trailing by double figures, because it was going to take a borderline miraculous offensive display to catch up once the Jayhawks squandered a handful of early possessions out of halftime.

Early on the defensive energy came in the form of blocked shots from Quentin Grimes and a steal and layup for Devon Dotson. In the meantime, the Jayhawks often were fortunate that ISU missed some open looks from 3-point range.

Luckily for KU, and you have to give at least partial credit to the defense for this, the Cyclones weren’t exactly on point offensively in the first half either. ISU has the potential to explode with 3-point shooting and strong guard play. But the Cyclones were 3 for 11 from deep and 13 of 31 overall before intermission.

The defense just wasn’t there in the second half, though. The Cyclones led by as many as 17 points fewer than 3 minutes into the half.

ISU spent much of the decisive half scoring at will and shot 56.5% in the final 20 minutes, while making 4 of 8 3-pointers.

Although Dedric Lawson scored a couple of baskets in the first few minutes, he hit a serious funk soon after, even short-arming a wide-open layup attempt. He finished the half 2 for 11 and didn’t get his third hoop of the night until making an and-one layup inside with KU down 17, minutes into the second half.

Lawson finished a forgettable night with 18 points, 8 rebounds and shot 8 for 21.

Freshman David McCormack, meanwhile, was hardly a factor much of the game. ISU’s four-guard lineup made it difficult for Kansas to play both Lawson and McCormack, because one of them would inevitably be a defensive liability from a matchup standpoint.

Dotson was the only player in a KU uniform consistently making winning plays on both ends of the floor for much of the title game.

The freshman point guard’s solid efforts (17 points, 3 rebounds) couldn’t make up for the way the team played as a whole, though.

After a hot shooting night in the semifinals, Grimes couldn’t keep it going in the title game, finishing with 10 points and going 0 for 6 on 3-pointers.

Ochai Agbaji, too, struggled more than he prospered, providing the most help he could with his 6 rebounds, while scoring 5 points.

Marcus Garrett deserved a ton of credit for ISU not completely running away with this game, and he played so well that Bill Self started him in the second half instead of McCormack.

Garrett killed it on the defensive glass, and had 9 total rebounds by halftime. The sophomore guard finished with 7 points, 15 boards and 4 assists while also providing his characteristically smart and effort-driven defense.

When Dotson got into foul trouble in both halves, Charlie Moore came through with a few positive moments, and totaled 5 points and 1 assist in 14 minutes.