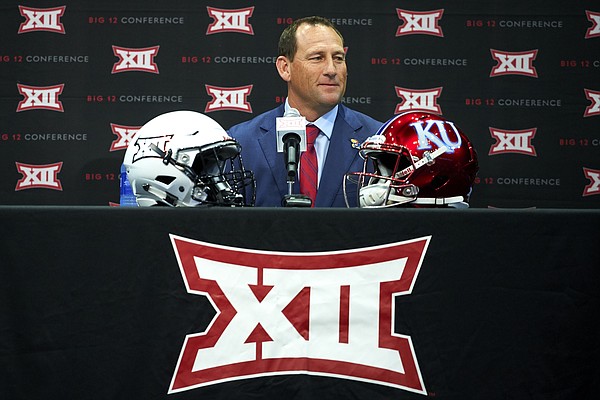 Frisco, Texas — Through three seasons as head football coach at the University of Kansas, David Beaty has not yet been able to pull off the grueling task of turning around the long-struggling program.

Addressing reporters Monday, at Big 12 Football Media Days, for the first time since the conclusion of the Jayhawks’ spring football schedule, Beaty, now 3-33 at KU, didn’t want to give many specifics about his expectations for Year 4.

Asked what win total would need to be achieved in order to display the growth and success that has been lacking at Kansas, Beaty opted not to put a number, or even a ballpark figure, on it.

“The name of the game in college sports is production, and we feel like we understand that is no different for us than it is for anyone else, that production is the name of the game,” Beaty began. “When it comes to our preparation, that’s not going to change. We’re going to start with Game 1 and the goal is go 1-0, to win that game and then put just as much focus on that next game to be able to do the same and repeat that.”

Beyond KU’s Sept. 1 opener against Nicholls State, and the obvious objective of leaving that game victorious, Beaty had no interest in projecting desired outcomes.

“When it comes to a win total, I don’t have that answer. I don’t know that many people do,” Beaty said. “But I do know this: I bet around Christmas time, we’ll know.”

It appears Beaty doesn’t want this season’s quarterback competition to end up as prolonged as last year’s, when KU didn’t name Peyton Bender its starter until the day of the opener.

Beaty said Monday during his morning press conference at Ford Center at The Star, “it is still a competition” entering preseason camp in August, between Bender, Carter Stanley and Miles Kendrick.

However, the coach indicated he and offensive coordinator and QBs coach Doug Meacham would like to determine a winner sooner rather than at the last minute.

“We’re going to narrow that down to two pretty quick. And I know our guys understand that. They know that there’s urgency to get yourself in that top two,” Beaty said.

Due to the “rough-and-tumble” nature of the Big 12, KU’s head coach added that all three QBs will be prepared and ready.

No longer playing for KU

The KU offense lost two skill players this summer, when running back Taylor Martin and tight end Kenyon Tabor had to leave the team.

Beaty said Martin wanted to be “closer to home,” in Fort Worth, Texas, while Tabor will remain at KU and involved with the program in a nonplaying role.

After receiving what the coach described as “extensive” evaluations for his ailing back, Tabor had to give up football.

“We feel really good about him getting back to a normal, healthy lifestyle," Beaty said. And, although Tabor will no longer be playing with the team for medical reasons, "he is still a huge part of our program."

The coach originally had anticipated that Tabor, a 6-foot-4 tight end from Derby, would become a big part of the program, calling him “probably the best player” in the Sunflower State in the Class of 2017.

“That’s hard to deal with, not having him. We were counting on that. But we’re counting on him having a great life, and that’s the most important thing,” Beaty said.

Tabor never played a game for Kansas, but Martin spent three seasons as a regular in the backfield.

Beaty said Martin encountered “some issues” that led him to want to leave KU, adding Martin “certainly didn’t get kicked off the team.”

“Sometimes, you do what you’ve got to do for family. His situation, my prayer for him is it doesn’t end his football career. That he’s able to handle that,” Beaty said.