Before the season began — and, really, as recent as a couple of weeks ago — Baylor University's men's basketball team figured to be one of the Big 12 programs capable of challenging league favorites Oklahoma State and Kansas. Or, at the very least, the Bears could make things difficult for the league's elite.

Then conference play began for BU like a smack to the face. After starting the season 12-1, Baylor has dropped three of its last four games, which coincided with the beginning of Big 12 play.

A glance at the conference standings shows Kansas alone at the top, with a 4-0 record, while Baylor is next to last, in ninth (ahead of only 0-5 TCU) with a 1-3 mark.

Back in December, long before their recent slide, the Bears beat Kentucky on a neutral floor. However, they lost to the other ranked teams they faced this season: Syracuse (at the Maui Invitational), at Iowa State and their last game, at home against Oklahoma.

BU's back-to-back losses this past week at Texas Tech and vs. OU dropped the Bears 12 spots in the new AP poll, to No. 24.

In the last seven seasons, Baylor is 20-32 on the road in Big 12 play. So one would figure the last place the Bears would want to play next, given their slump and road woes, is Allen Fieldhouse.

Although Baylor has won two of its last three meetings with Kansas, that success didn't come on the road. If the Bears want to achieve a program first and beat Kansas in Lawrence, where they're 0-11, they'll need productive nights from every one of their top eight players. 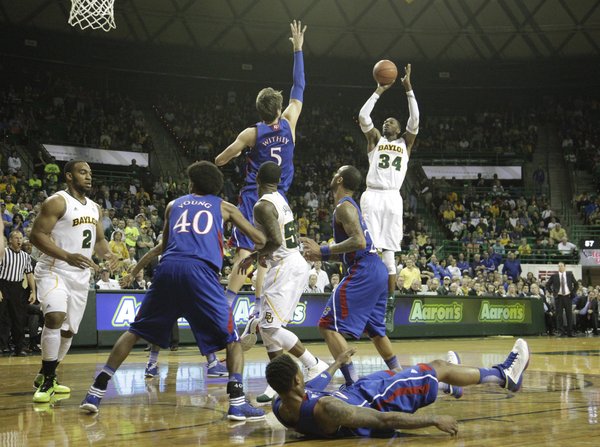 Baylors Cory Jefferson (34) fires in a shot over Jeff Withey (5) in KU's 81-58 loss to the Baylor Bears Saturday in Waco. by Mike Yoder

A fifth-year senior, Jefferson has emerged as Baylor's most reliable scorer. He has reached double figures in 21 of his previous 24 games (dating back to last season) and has 17 double-doubles in his career, with six coming this season.

Baylor is 35-9 all-time when Jefferson reaches double digits in points, and he averages 13.1 a game this season on 53.1-percent shooting, to go with 8.4 rebounds.

The lead guard contributes 11.9 points a game, but his play-making is even more valuable for Baylor. While Cherry has 16 three-pointers on 51 tries, he leads the team with 5.1 assists an outing.

For 12 straight games, Cherry's assists numbers have outweighed his turnover totals. In the past six games, his assist-to-turnover ratio sits at 28-to-6. 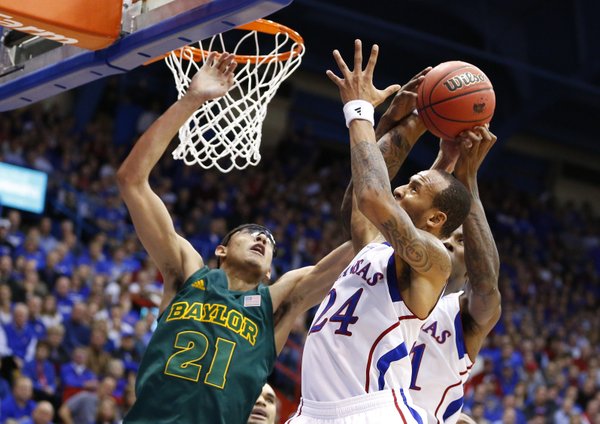 Kansas guard Travis Releford pulls a rebound away from Baylor center Isaiah Austin during the second half on Monday, Jan. 14, 2013 at Allen Fieldhouse. by Nick Krug

The largest man in a Baylor uniform does some of his work inside, but he likes to drift out for jumpers, too, and has even taken 10 threes this season, hitting three of them.

Austin wears a prosthetic right eye after his retina detached when he was in junior high, but the rest of his body and his wealth of ability more than make up for that loss. The 7-footer averages 10.4 points, 5.7 rebounds and 2.8 blocks.

In just his second season with Baylor, Austin already ranks sixth in program history with 106 blocks (which ties him with Willie Sublett).

At 6.6 points a game, Franklin doesn't make a ton of baskets, but chances are when he does it will be from three-point range. A whopping 79 of his 100 career field goals as a member of the Bears have been three-pointers.

Franklin has proven himself as a consistent threat from behind the arc. Going back over his past 44 games, he has made 40 percent of his threes (54 of 135) and he is 27 for 68 this season.

Like most of us hope to achieve, Franklin is getting better with age. He has five double-digit scoring outings in his last 13 games after achieving that only twice in his previous 68 appearances for Baylor.

A transfer from Denver, O'Neale has started the last 10 games for Baylor.

O'Neale's ball-handling certainly can't be blamed for Baylor's recent slump, though. In BU's past six games, he has 17 assists against three turnovers. 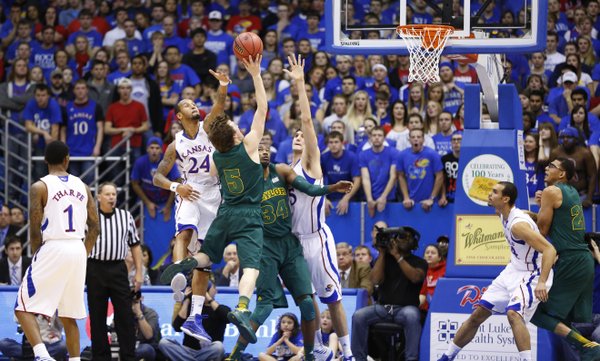 Kansas players Travis Releford (24) and Jeff Withey get in the face of Baylor guard Brady Heslip during the first half on Monday, Jan. 14, 2013 at Allen Fieldhouse. by Nick Krug

He puts the shooting in shooting guard. Heslip plays 21.9 minutes a game, but he comes off the bench firing, and his accuracy has a lot to do with Baylor's spot as the top three-point shooting team in the Big 12 (39.3 percent).

The Bears' best three-point marksman, Heslip averages 10.8 points a game this season, and has drained 46 of 99 from downtown (46.5 percent). In fact, he is Baylor's career three-point shooting percentage leader at 42.9.

Fifteen times this season, Heslip has hoisted at least three three-pointers, and in 14 of those games he hit at least two from deep.

In the 2012 NCAA Tournament, Helip cashed in nine from long range to lead Baylor to the Sweet 16.

In his last six games, Prince totaled 82 points on just 50 shot attempts. The efficient forward tends to start hot, too. In his last five games he has made 17 of his 25 field goals before halftime. 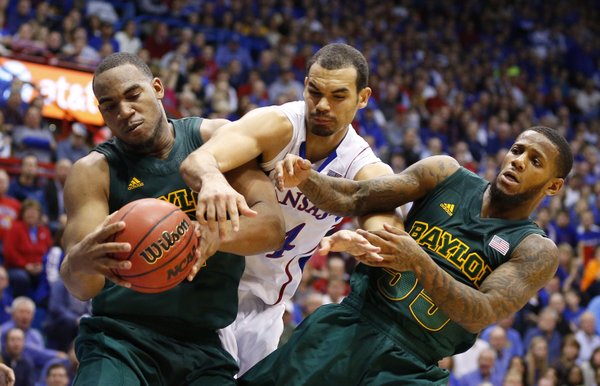 Kansas forward Perry Ellis wrestles for a rebound with Baylor players Rico Gathers, left, and Pierre Jackson during the second half on Monday, Jan. 14, 2013 at Allen Fieldhouse. by Nick Krug

During Baylor's last 10 games, he's averaging 10.3 points and 8.9 rebounds, and Gathers has posted double figures in six of his last eight games.