Andrew Parchment bluntly gives himself an F after frustrating performance 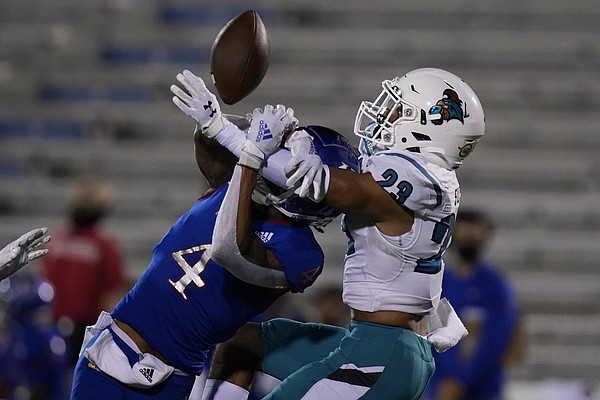 Andrew Parchment made it unmistakably clear that the Kansas football team’s second home loss to Coastal Carolina in as many years was unacceptable. And the senior receiver did so by pointing the finger at himself.

After the Jayhawks’ offense turned the ball over three times in the first half of their opener, leading to 21 points for the Chanticleers, there were plenty of questions about KU’s issues.

During Parchment’s postgame video press conference an inquiry came up about the performances of KU’s quarterbacks in the 38-23 loss.

“I would grade my performance as an F,” Parchment replied.

And what about the QBs?

“I would grade my performance as an F,” Parchment repeated.

The 6-foot-2, 180-pound senior wideout felt that way, he elaborated, because, “I didn’t do enough for my team to win the game.”

Parchment returned to that theme a little later during his Q&A, when asked about how Miles Kendrick played at QB after Thomas MacVittie had to leave the game due to an injury.

“My performance tonight was an F,” Parchment replied.

Parchment caught six passes for 54 yards and a touchdown in KU’s season debut, but he kept circling back to what he deemed his personal failures on the night. He identified a few things he could have done better.

“The block on the perimeter,” Parchment began, referring to a Takulve Williams fumble immediately after a reception on KU’s second possession, when Parchment “got beat up on a block” near Williams.

The senior receiver also said he needs to be more of a leader, “not only on Saturdays, but through the week.”

As Parchment admitted, it was his blocking on the perimeter in particular that was not up to snuff. As detailed in the NCAA Premium stats from Pro Football Focus, Parchment’s night was graded out at 57.3 on his 75 snaps. PFF graded his run blocking on 26 plays at 32.8.

Even when asked about about his 14-yard TD reception on 4th and 5 in the third quarter, Parchment wasn’t interested in taking any credit.

“I don’t honestly remember,” is all he said about the score.

All of this transpired after the loss because Parchment holds himself to high standards. He aspires to be one of the best receivers in the country and he knows, especially playing for KU receivers coach Emmett Jones, that there is much more to the position than catching a few balls and adding a TD to your stat line.

The next step for Parchment, he said, is watching the video from the game and learning from his mistakes. That’s a theme that showed up on his Twitter timeline, too, in the days that followed KU’s loss. Parchment retweeted some messages from NFL receivers that seemed to apply to his current situation.

Carolina receiver Robby Anderson tweeted: “Best thing I ever did was look myself in the mirror and tell myself the truth and take accountability for my own actions and take pride in restructure.”

None by Robby Anderson

“Andrew Parchment’s a competitor,” Kendrick said. “He has a lot of passion for the game. And I think that’s just what that is. I think a lot of guys on the team feel that way tonight.”

Kendrick said all of the Jayhawks have to watch the game footage and make corrections and improve, just like Parchment said.

Fellow senior receiver Kwamie Lassiter II explained why Parchment was hard on himself.

“It’s tough, but we’ve all got things we need to work on,” Lassiter said. “We’re gonna come back on Monday and then go to work. And step up, because we’ve got to go down to Waco and play again.”

The Jayhawks play at Baylor on Sept. 26, following their bye week. 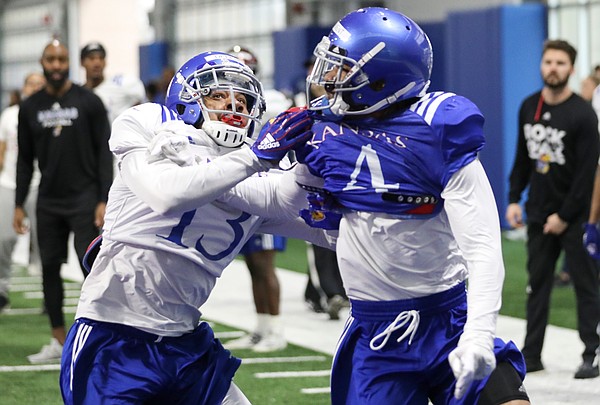