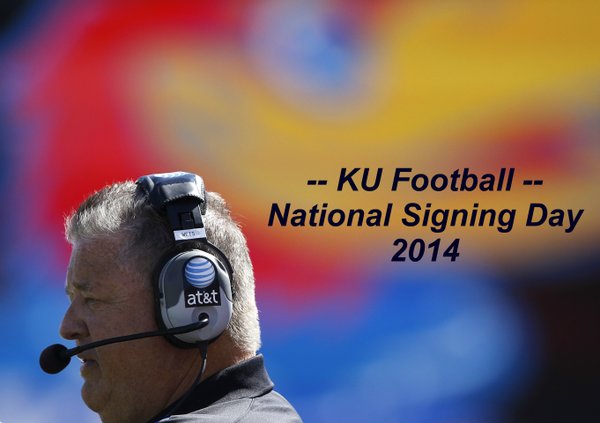 It's National Signing Day and KU coach Charlie Weis is expecting 20 letters of intent to arrive via fax. by Matt Tait

If you need a refresher, here are the details on the players who signed on to become Jayhawks on Wednesday:

Now, on to the bullet-point highlights from the Q & A:

- On improving wide receiver depth: Each WR Kansas signed is different. They're not the same player. They all bring different things to the table.

- The D-line got a boost, too: Weis would argue KU's defensive line depth was just as improved as the WR position, if not more so. "Not every year do you have a chance to get these guys."

- Kansas coaches hit Texas hard in recruiting. Last year there was a different mentality. Weis thinks the corridor from Chicago to Houston has to be KU's niche in recruiting… It helps that KU plays so much in Texas. Players not only will be seen on TV, but also get to come home.

- On assistant coach Reggie Mitchell: Weis would like to get him involved more locally in recruiting, too. Kansas will tweak some of its areas. The staff will do so by figuring out which areas make the most sense to invest their recruiting man power. If you're going somewhere and not bringing any players back, you're wasting time, energy and money. … Mitchell is a "top-flight" recruiter. Weis is on the Mitchell bandwagon.

- After two seasons at KU, the recruiting pitch has changed. To junior college kids: "We're not taking 20 JUCO kids, but we want you." For high school kids: "This is our third recruiting class and this is what we want to do." … Weis feels KU is a wonderful school and sells itself when recruits get them on campus. … JUCO guys want to play now, high school guys want to know the long-range plan. … KU's staff showed more patience this year in recruiting process, and in the end they got the guys they wanted. Hard work and relationships end up paying off.

- Just because some other program offers a player doesn't mean KU will be reactionary. Offer will come when Kansas staff does its due diligence. Players have to show there are reasons for that offer to come. No staff goes without its mistakes, but that won't change the approach at Kansas.

- KU is starting to build numbers at every position. It will take some work for some freshmen now to get into the rotation or move up the depth chart.

- The first time Weis watched running back Traevohn Wrench on video, he went for about 400 yards, busting 40- and 20-yard runs. "Nine's a bad run for him." Wrench put up big numbers for Gardner-Edgerton, and it wasn't like the teams they were playing were no good. He's 190 pounds now, but he'll be 210 pounds before long, and that's the size of NFL running backs.

- Wrench could be a star, but Weis likes these linemen, who play "down and dirty." It would be nice to have a pass-rusher who finishes the year with 15 or 20 sacks. Weis doesn't just look at the skill guys when thinking about who has the highest ceiling in this class.

- If a graduated college player looking to transfer approached KU at this point, Weis would want to make sure that player could start, and be better at his position than what KU currently has on its roster.

- KU football players serve as student-hosts on recruiting visits. Coaches try and match personalities. They need to know the recruit and know their own player. Some guys might want to go check out Mass. St. Others might want to play video games. Coaches spend a lot of time figuring out what players would be good hosts for certain recruits. A very good recruiter/host is Victor Simmons, a junior defensive back from Olathe. Players like him, he's local and he'll do it any time the coaches ask him. He's just one guy of many who does a good job.

- John Reagan, KU's new offensive line coach and offensive coordinator, had a week from hell when he came on, because he had to travel all over the country to check out KU's offensive line recruits. It was important for Reagan to get in with every one of those guys.

- KU needed this class. It fills so many needs. This is like finishing a draft and feeling like every need has been filled. Last year, KU had holes. This year, KU had needs. The coaches needed to set the program up for success. If freshmen are ready to play, they'll play, otherwise they'll develop them and get ready for the future.

- Corey Avery, labeled an athlete, could be good at any position the KU coaches put him at. He's a good football player, not just an athlete. Weis is a big fan.

- The only downer of signing day was thinking about Andre Maloney, who died last fall. Weis wants Maloney's family to know everyone in the KU family has them in their thoughts and prayers.