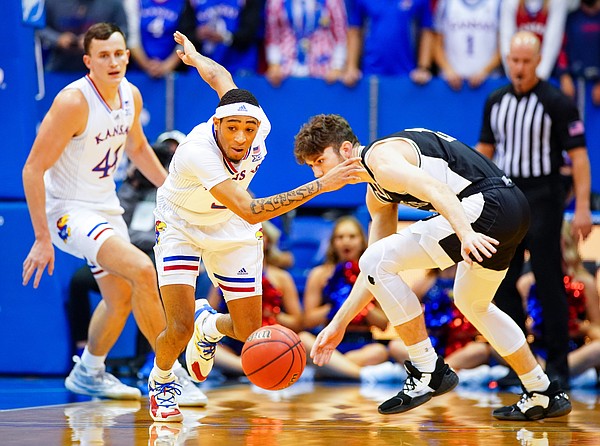 Kansas guard Dajuan Harris (3) knocks the ball away from Emporia State forward Adam Nance (23) during the first half on Wednesday, Nov. 3, 2021 at Allen Fieldhouse. by Nick Krug

The man most everybody inside Allen Fieldhouse came to see Wednesday night didn’t even start for No. 3-ranked Kansas. But basketball aficionados no doubt derived some entertainment out of watching a different style of lead guard, and one who actually started, while they were waiting for the main event.

No, not Chris Teahan, the sixth-year walk-on and student section favorite who replaced highly anticipated Arizona State transfer Remy Martin in KU’s starting five. Dajuan Harris, the redshirt sophomore who isn’t as likely to frequent the highlight reels on social media as the flashier Martin, but plays the type of basketball that coaches love.

Harris fits in so well on both ends of the court that head coach Bill Self might have even started the wiry point guard over Jalen Wilson (suspended) for the 86-60 preseason warmup versus Emporia State.

Martin (15 points on 7-for-10 shooting) proved to be electric with the ball in his hands from the moment he checked into the exhibition about six and a half minutes into the action.

But it was Harris who gave the Jayhawks their first spark of the night a few minutes earlier, diving onto the floor to give KU some defensive energy, which it had sorely lacked most of the opening minutes. Harris’ hustle turned into a KU steal and soon after a Christian Braun bucket in transition. It was one of those underrated moments that gets a team that should be dominating on track.

Harris, the quiet, 6-foot-1 guard from Columbia, Mo., had a low-key night in the box score, too, finishing with six points, two assists and one steal in 22 minutes.

As Self said Harris told him after the exhibition, it was an “OK” performance. But that doesn’t mean Harris’ spot in the starting five will be in jeopardy. Harris attacks the game in a way that his coach appreciates.

“Juan has been as good a player as we’ve had,” Self said of what the Jayhawks have looked like during their preseason practices, “so Juan’s going to start. I don't know if that'll be for all season long or whatever. But for the foreseeable future, for sure, we’ve got to have Juan on the floor. Juan and Remy can play together, they can both start together. But Juan has been very consistent so far. He's got good hands.”

Self didn’t start Martin against Emporia State, but he did start Harris. Self said Martin coming off the bench had to do with the coach expecting his players to play a certain way. He mentioned Martin is quick, but doesn’t use that quickness on the defensive end of the court.

Harris and Martin are two very different types of guards, but there’s got to be some benefit to the more experienced scorer taking on some of the traits of the reserved sophomore.

Martin is a shot-maker. A walking bucket, as the kids like to say. And no one with KU, including Self, wants that to change. When Martin checked in Wednesday night, the former All-Pac 12 guard saw defenders in front of him that he knew he could cook, so he did — even though his coach at least a couple of times in the first half would’ve preferred to see Martin move the ball and run the half-court offense instead of going one-on-whoever-was-in-front-of-him and scoring.

Harris is as old school a point guard as you’ll come across these days. He’s all about running KU’s sets, finding teammates, and getting to the right spots on the floor.

You could call the contrasting styles of Martin and Harris just a case of both players playing to their strengths. The thing is Martin could be even more crucial for the Jayhawks by adding some of those Harris attributes.

Self knows both guards go about their business in ways that benefit KU.

“I think Remy can just kind of understand ball and body movement gives the post guy a better touch than him just holding it, trying to get the ball to the post guy,” Self gave as one example of how Martin could emulate Harris.

This is the long game for Self: bring Martin off the bench now, in an exhibition that doesn’t matter and you’re obviously going to win anyway. Send a message about the type of basketball you want him to play. Not only do you get to see how he reacts, you also send a reminder to everyone on the roster that if you’re not willing to approach the game in a certain way — the way Self wants — then you could end up on the bench, whether you’re the 10th man in a deep rotation or the preseason Big 12 player of the year.

You can never tell much about KU from these lopsided exhibition blowouts in early November. But Self made it more interesting than expected with a bold move, bringing a star — the students showered Martin with chants of “Remy” moments after the exhibition as he did an on-court interview — off the bench.

Great article Benton. Lots of us have probably coached youth bball at some point and I usually understand and support HCBS point of view on these matters. This is once where as a fan I just want to see Remy on the court all the time! Not sure we've had a presence at point like this since Jacque Vaughn or maybe Mario. Reminded of the old joke about the last guy to hold MJ under 20 per game.