Jayhawks' nearly fell all the way into complacency trap before escaping vs. UTEP 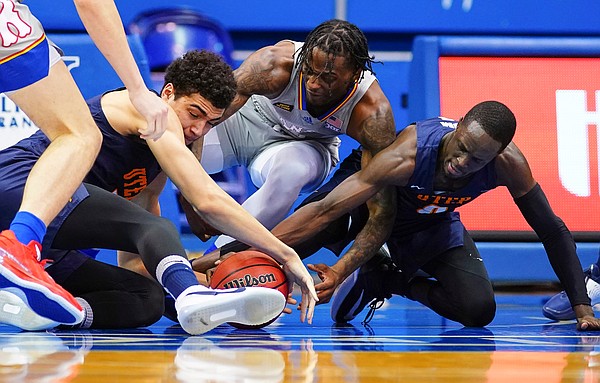 Kansas guard Marcus Garrett (0) wrestles on the ground for a ball with UTEP forward Tydus Verhoeven, left, and UTEP guard Souley Boum (0) during the first half on Thursday, March 4, 2021 at Allen Fieldhouse. by Nick Krug

When the Kansas basketball program announced last week it was adding Thursday’s nonconference game against UTEP to the schedule to bridge the gap between a much anticipated rematch with Baylor and next week’s Big 12 tournament, the news might as well have come attached with a Star Wars GIF of Admiral Ackbar warning, “It’s a trap!”

The Jayhawks crashed beaks first into it, though, coming off their best win of the year and seemingly approaching the regular season finale at Allen Fieldhouse as an afterthought of a pitstop on the way to the postseason.

The ultimate trap game nearly did them in, too. The Jayhawks were great five days earlier against previously unbeaten Baylor, one of the best teams in America. But a contrasting performance for much of the night against unheralded UTEP meant KU made its March debut in unspectacular fashion, escaping with a 67-62 win after trailing by as many as 15.

It was human nature for the Jayhawks to overlook a Conference USA opponent that came to Lawrence just two games above .500 on the season and 8-8 in its league. However, their inconsistencies throughout this albeit strange year should’ve had the Jayhawks prepared to play with an edge. Eventually they did. It just took too long for them to get there.

“It definitely started out as a trap game, just not having the right mentality,” KU junior forward David McCormack said afterward, adding the Jayhawks needed to be more aggressive early in the contest, when UTEP was in control. “But we were smart enough to realize that and flip the switch and make sure not to have the result of a trap game. We still walked out of here with a win and that was the main point.”

Ochai Agbaji (19 points, six rebounds, two steals) often made the types of plays that indicated he wanted to finish the regular season with a win. Similar instances of energy from other Jayhawks were much harder to find during the first 30 minutes of the game, though, before they collectively generated some momentum by making defensive stops and cutting UTEP’s margin to single digits.

McCormack, who scored 16 of his 18 points after halftime, became the go-to post scorer down the stretch that he should’ve been in the first half, keying KU’s rally as all the Jayhawks finally started playing with some purpose and fire.

“The first half,” KU coach Bill Self said during his postgame video press conference, “I didn’t think our energy was very good. I don’t think we respected them like we probably should’ve, even (though) after watching tape you could see how athletic they were.”

Self thinks UTEP’s two best players, Souley Boum (16 points) and Bryson Williams (23 points and 13 rebounds), are good enough to play for any team in the Big 12. There will be similar under the radar players awaiting KU in the weeks ahead.

If the Jayhawks are fortunate enough to totally regroup from the UTEP scare, impress at the Big 12 tournament and land a No. 3 or No. 4 seed in the NCAA Tournament, approaching a March Madness game in similar fashion, like winning is a given and operating on autopilot will get it done, they’ll make an immediate first-round exit.

There will be much more tension in that first-round game for KU in Indiana, too, regardless of the Jayhawks’ seed. Every player and coach in the field would love to say he was involved with knocking out Kansas, and any team the Jayhawks run into in the tourney will be much more capable than UTEP.

“It’s a good lesson to learn that we are so average — at best — when we don’t play a certain way,” Self said. “And when we play a certain way we can get pretty good. But our energy level defensively and rebounding the ball was very poor the first half and certainly very good there late.”

Perhaps the odd regular season finale, which at least prevented the Jayhawks from getting rusty, also will end up helping them in another way, serving as a wakeup call that saves them an embarrassing exit from Indy when the whole country — not just diehards with an ESPN+ subscription — will be watching.

KU isn’t good enough this year to rely on flipping a switch with the season on the line. Figuring that out now might keep the Jayhawks from falling into a more perilous trap when the real March Madness arrives.

"any team the Jayhawks run into in the tourney will be much more capable than UTEP".... Exactly!! I wasn't surprised when UTEP was ahead of KU by 15. They played really well. Williams is a real deal. We need big player like that. Good thing we tuned up our D in the end.

But, no matter how good defense is, can't underestimate the fact that most teams in entering the tourney are capable of shooting the lights out from perimeter. We don't have shooters, that's the scariest thing in basketball. It'll be an exceptional luck if we can even past the first round. Seriously.