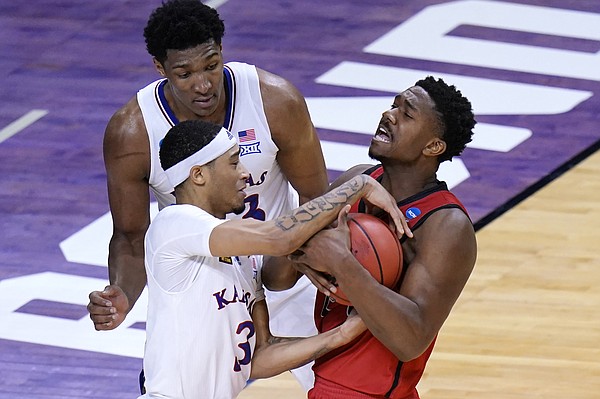 The way Dajuan Harris played against Eastern Washington on Saturday in the opening round of the NCAA Tournament, he may never come off the bench again for Kansas.

March Madness has a way of creating college basketball stars. Those who emerge unexpectedly and embrace the stage end up making winning look easy, bringing the best out the players around them and, most importantly, propelling their team on to the next round.

While David McCormack turned in a folk hero level performance in his return at Indiana Farmers Coliseum, in Indianapolis, and senior Marcus Garrett played like a senior not interested in seeing his career end, the Jayhawks’ run in this year’s tournament might already be over and done with if not for the play of the smallest man in the Kansas basketball rotation, redshirt freshman Harris.

In just his 29th career game, KU’s backup point guard, listed at 6-foot-1 and 160 pounds, had his new career scoring high before halftime, which wasn’t hard to do considering the low-usage reserve’s previous best was seven points.

But Harris did much more than score 13 points and shock the Eagles with his 3-for-4 3-point accuracy. He played with the poise of a senior, making it possible for the Jayhawks (21-8) not to panic when No. 14 seed Eastern Washington (16-8) had an upset brewing.

“We were in real trouble,” KU coach Bill Self said afterward, “if it wasn’t for Dajuan.”

The Eagles, who led by as many as 10, gave KU more than a scare. The Big Sky’s lone representative in the field went up 9-0 on the Big 12’s premier basketball program in less than two minutes. But the deficit wouldn’t become more disastrous, because as soon as the margin hit nine, Self abandoned his starting five to bring in Harris and McCormack.

This wasn’t the case, earlier in the season, when Harris was still learning the ropes, but the Jayhawks in March are simply a better team when he’s on the floor. It proved to be true yet again during his first taste of the NCAA Tournament, when the young point guard from Columbia, Mo., gave KU 13 points on 5-for-8 shooting, to go with his four assists, two steals, one block and no turnovers in 35 minutes.

Harris, just like starters Garrett, Ochai Agbaji and Christian Braun, played all 20 minutes of the second half, because KU needed him impacting the game during every second possible. The Jayhawks were noticeably worse off when either Harris or McCormack weren’t on the floor versus EWU.

In the middle of praising Harris during his postgame video press conference, Garrett didn’t reference his fellow guard’s points or assists or 3-pointers. Garrett instead brought up Harris’ eye-catching plus/minus of +22.

“I feel like he played a great game,” Garrett said. “He gave us the boost we needed.”

In fact, the Jayhawks blew out the Eagles when Harris was on the floor, 91-69. During the roughly five minutes in which Harris sat in KU’s first-round win, the Eagles outscored the Jayhawks, 15-2.

Said Garrett: “He came out there, he did what Dajuan does — he took the shots that were open and he knocked them down.”

When the Eagles invited Harris to put up 3-pointers, the young guard showed no fear, and made them pay for doubting him. Even though Harris only attempted nine 3-pointers (and made five) total in his first 28 college games, he didn’t have a reluctant approach, negating EWU’s strategy. The Eagles undoubtedly expected a freshman known for not shooting to tense up and hoist bricks or drive into a defense that was waiting for him.

Harris was too unflappable for that to work.

“I feel like he has confidence shooting the ball,” Garrett said of Harris’ surprising output from 3-point range. “He just doesn’t take them all the time, because that’s kind of not what he does for the team. But when he does take them he has a chance to knock them down.”

Those days of being a non-factor are behind Harris now, though.

“Juan was probably the best player we had from start to finish,” Self said following the young point guard’s March Madness debut.

Harris has not only proven himself now, he’s also earned his coach’s trust. The spotlight will get hotter and the competition more athletic and imposing from here, but Harris has shown he belongs in the staring lineup.

The Jayhawks opened their NCAA Tournament run with a lineup of Garrett, Braun, Agbaji, Bryce Thompson and Mitch Lightfoot. But the five who got them out of the first round — Harris, McCormack, Garrett, Agbaji and Braun — should be the starting five for round two.

How Jalen Wilson handles his return from COVID-19 — and whether he can play on Monday against USC and be impactful, like McCormack was vs. EWU — will go a long way in determining whether the Jayhawks can reach the Sweet 16 and extend their stay in Indianapolis. Regardless of how many more games remain for KU in the West region, Harris has demonstrated as a floor general who plays with confidence, vision and defensive energy — and let’s not forget he’s also a 3-point shooting threat (8-for-13 on the season) — that he deserves a promotion to the starting five from here on out.

Well said, mr. Smith! Juan is da man! We can see more productivity from all other starters - especially Marcus, who's been doing it all, now you can see he's got less pressure and his 3 shooting is back. It's time! Yes, we've got a secret weapon. It's been revealed today. A silent assassin. Marcus is right, the kid can shoot, his mission is clear: to make others better first. Now, he realizes, he can better the team, by scoring, too. Let's keep the momentum going! ROCK CHALK!!!!

No doubt Juan is going to get a lot of minutes on Monday, but I expect Jalen to start if he is physically able, especially with the overall length that USC puts on the floor

This reminds me of when the consensus was that (soph) Sherron was supposed to be starting but Coach kept the chemistry and brought him of the bench. It seems that he has managed the lineup similarly in the past though I’m not recalling the other instances.