The Jayhawks are entering the NCAA Tournament with a rebounding problem 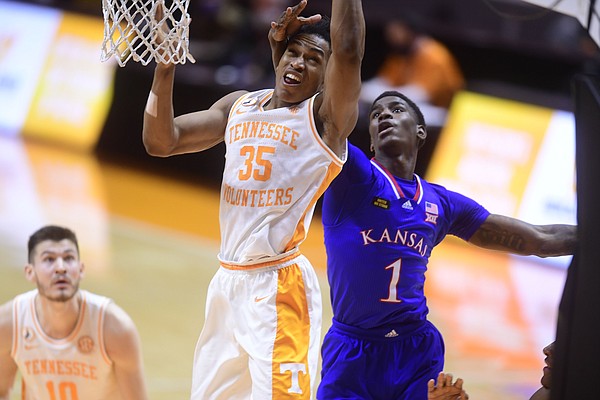 Tennessee guard/forward Yves Pons (35) and Kansas guard Tyon Grant-Foster (1) go for the rebound ball during a basketball game between the Tennessee Volunteers and the Kansas Jayhawks at Thompson-Boling Arena in Knoxville, Tennessee on Saturday, January 30, 2021. by Tennessee Athletics

Entering the NCAA Tournament without their best rebounder, Jalen Wilson, and not expecting a whole lot from their top big man, David McCormack, the Jayhawks have a rebounding problem on their hands at quite an inconvenient time.

At full strength, No. 3 seed Kansas wouldn’t have to devote an inordinate amount of attention to the battle of the boards against No. 14 Eastern Washington. But with Bill Self expecting his team to have to play “extremely, extremely small” during Saturday’s first-round game in Indianapolis, how the shorthanded Jayhawks handle themselves on the glass could determine their postseason fate.

Throughout his redshirt freshman season, Wilson has easily been the Jayhawks’ strongest rebounder, averaging 8.2 boards a game. In KU’s past 10 games, the 6-foot-8 guard (also the team’s small-ball 5-man) was even better, pulling down 10.4 rebounds a game. Wilson had 14 rebounds at West Virginia and against Baylor during that stretch and 13 at Texas.

According to sports-reference.com, Wilson’s total rebound percentage — an estimate of the percentage of available rebounds a player secured when he was in the game — was 15.7%, the highest of any rotation player for KU.

As you’d expect, McCormack ranks second in total rebound percentage at 14.7%. The problem facing KU is that not even Self knows what McCormack will be able to give the team versus Eastern Washington.

The Jayhawks (20-8) are actually preparing most of their game plan around playing without their 6-foot-10 junior post player. McCormack isn’t expected to join the team in Indianapolis until Friday, roughly 24 hours before the matchup with Eastern Washington (16-7) at Indiana Farmers Coliseum (Saturday, 12:15 p.m., TBS). The expectation is that he will practice Friday for the first time in more than a week, dating back to when he tested positive for COVID-19.

Whatever McCormack can give KU on Saturday, Self said, will be considered “a bonus.”

The wild card on the KU roster will be reserve guard Tyon Grant-Foster. An athletic 6-foot-7 junior college transfer in his first year with the Jayhawks, Grant-Foster hasn’t played in a game since Feb. 17 — not because of injuries or ailments, but because he just wasn’t a part of the rotation.

If Grant-Foster can manage to not look rusty or out of place and generally avoid the types of mistakes that would lead Self to keep him on the bench, the numbers say he could make an impact on the glass. The seldom-used guard actually has a higher total rebound percentage (14.5%) than Lightfoot (13.3%), Braun (9.5%) and Garrett (7.4%), as well as Tristan Enaruna (9.7%), who will miss the Eastern Washington game after testing positive for COVID-19.

Can Grant-Foster rebound in the NCAA Tournament like he did in his most productive games of the regular season? The Jayhawks certainly need him to replicate those outings — six rebounds against Washburn, eight against North Dakota State, seven against Omaha and five vs. TCU.

It’s been nearly two months since someone other than Wilson or McCormack was KU’s leading rebounder in a game — that happened when Garrett led the Jayhawks on Jan. 28 with seven boards. But the run of 12 consecutive games in which Wilson or McCormack led the way is about to end, unless McCormack is able to play far more than expected.

It will likely take a total team effort, rather than one herculean performance from Lightfoot, Braun or Garrett, for KU to make sure the Eagles don’t dominate on the glass. The Jayhawks will have their work cut out for them, too, especially when they’re dealing with Eastern Washington’s junior glass cleaners, Groves (8.1 rebounds per game) and 6-foot-7 wing Kim Aiken Jr. (8.5 per game).

Both Groves (17.3%) and Aiken (15.9%) enter the tournament with better total rebound percentages than anyone in KU’s rotation. In particular, it could be extremely difficult for the Jayhawks to come up with many offensive rebounds. According to KenPom.com, Groves’ defensive rebounding percentage of 26.8% ranks 27th among all Division I players, and Aiken ranks 87th at 23.4%.

Regardless of how they make it happen when a shot comes off the rim, the Jayhawks need to give Eastern Washington a battle on the glass. Winning on the boards could clear a path to the second round. KU is 15-2 this year when outrebounding its opponent, and just 5-6 when the other team wins the rebound margin.

What’s more, when the Jayhawks got significantly outmuscled or outworked on the glass, they went 0-5 — Gonzaga had a +9 advantage in rebounds, Texas went +9 in Lawrence and +12 in Austin, Oklahoma was +10 in Norman, and Tennessee (+15) destroyed KU on the glass in one of the Jayhawks’ worst games of the season.

Earlier this week, Braun downplayed any concerns about the Jayhawks’ ability to compete for rebounds in Wilson’s absence.

“We don’t think it will take a hit,” Braun said. “That’s something we’ve been focusing on. Everybody’s just got to step up. Everybody’s got to crash the boards and help everybody.”

The answer is to play tighter, more intense defense. That will be difficult to execute with Grant-Foster in the lineup; he’s usually way out of position, leaving huge gaps or simply losing his man or failing to rotate etc.